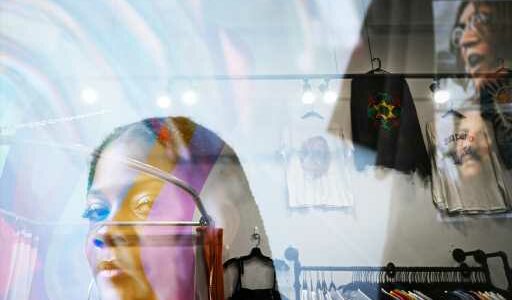 Growing up, Tristan Bego was known for treating her school hallways as fashion runways. It didn’t matter that her clothes were hand-me-downs or from secondhand stores. Budget constraints made her all the more creative.

Thrifting has always been a way of life for the 29-year-old, so much so that, a year ago, she and her business partner Jenny Neal opened a storefront on Denver’s Capitol Hill. The Common Collective, at 613 E. 13th Ave., brings together 14 small businesses selling thrifted and custom-designed goods, from vintage concert T-shirts to retro embroidered sweaters.

“Thrifting is trendy now, but when we were doing it back in the day, it was not trendy,” Bego said. “It was just a way for us to access clothes, but now it’s the cool thing to do. As a business owner, I love that. Plus, it’s so much more sustainable, and Denver is the No.1 thrifting city. People come here specifically to thrift.”

This year, Denver was named the best city for thrifting based on thrift store availability, sales volumes and thrifting-related Google searches, according to an analysis by storage-space marketplace StorageCafe.

Metro Denver boasts nearly 200 resale stores — about 6.6 thrift stores for every 100,000 residents, which is above the national average of 4.8 resale shops per 100,000, the analysis found. On average, Denver households are spending $190 a year on secondhand sales.

In the U.S., thrifting-related Google searches averaged 4 million a month from July 2021 to June 2022, double the search volume from the same time period the previous year, the analysis found.

The surge in interest comes amid the pandemic and, resellers said, skyrocketing inflation that heightened the economic appeal of thrifted clothing. Thrift hauls posted on Instagram and TikTok in which buyers photographed and filmed themselves trying on their best vintage finds also have inspired newcomers to join the fray of Goodwill junkies.

If you want to cash in and sell some well-loved garb, The Denver Post spoke to three secondhand clothing sellers about how they got started and what advice they have for beginners looking to get in the game.

Renee Suiter, 55, had been casually selling items from her closet on the e-commerce app Poshmark for a few years when the urge to turn her side hustle into her own business became too strong to ignore.

The Littleton resident was working for her husband when, one day in 2017, she packed up her car, drove to New Mexico — where she was from — and told her husband she’d be there for a few weeks mapping out a business plan to turn her Poshmark hobby into a career.

“I became very unsatisfied in my everyday life as far as feeling like I didn’t want to work for him anymore,” Suitor said. “I came back home not knowing if my marriage was going to make it. I asked if he would prefer having a wife or an employee. He said he wanted a wife, thank God. It’s been the best decision I’ve made for me as a woman, as an entrepreneur. I love it.”

This year alone, Poshmark has seen more than 48,000 Denverites cash in by reselling items. In the past five years, there have been more than 193,000 active Poshmark sellers from Denver, according to the company.

Suiter’s Poshmark store, called reinascloset, is now her full-time gig, which she runs out of her home. Suiter sources clothing from local thrift stores — searching for brand names and bright, happy pieces — and then lists her finds on the app.

Lululemon activewear, Free People floral tops and Coach bags were just a few of the items Suiter had for sale last week.

Suiter starts her day at 5 a.m. so that by 9 a.m. she has at least five fresh items added to her online store. She makes sure to interact with customers through the app just as retail workers would talk to shoppers entering their boutiques.

Suiter said she’s older than many of the local resellers and finds herself mentoring younger sellers.

These are her top three tips:

Reselling is still a hobby for Leslie Cikra, 31, who runs a girl’s volleyball club as her day job and thrifts and resells on the side.

Cikra’s father owned a fur coat company and her mother worked at Saks Fifth Avenue, so fashion has always been a part of the Denverite’s life. The treasure hunt for a standout piece drew Cikra to vintage and thrift shopping, but when the hunt grew too intense and Cikra ended up with more clothing than she could handle, she decided to start selling.

After the lockdown phase of the pandemic, Cikra was sick of wearing pajamas and loungewear all the time. She found joy in dressing to make herself feel good and loved the added bonus of eco-friendliness that comes with secondhand shopping.

Sometimes Cikra will sell clothing she’s accumulated to local thrift stores rather than listing everything individually.

Maybe one day, Cikra will take her small business full-time, but for now, she’s happy to pop into resale shops during her busy life and hunt for the items that are almost too hard to let go.

“The most important thing is sticking to what you like,” Cikra said. “Develop your aesthetic. If you love vintage, if there’s an era you’re drawn to, you bring in a community of people that are going to be attracted to that vibe. Everybody’s aesthetic is so different in the thrifting community, and there’s space for everyone.”

“Try all the things”

While Bego’s storefront — motto “making sustainable, Black-owned, woman-owned, gender-neutral business the common” — works for her, she encourages newcomers to find the medium that’s best for them, whether it be selling through Instagram, pop-up events, eBay or even making deals while sourcing materials in area thrift stores.

Bego’s vintage collection, called February Jones Co., can be found at her shop as well as on Instagram at februaryjonesco.

“Try all the things,” Bego said. “To dream is to know what you actually want. If you really want to do this, it needs to be your passion, because you need to spend time connecting with your audience to be successful.”

Bego said the thrifting community in Denver can be competitive, but that there is always enough variety to go around and a good amount of support, too. Connecting with fellow thrift resellers on social media and at pop-up events is key to getting further involved in the business, Bego said.

Making the time to sort through the Goodwill bins and dig through plenty of duds — sometimes for hours a day — is what takes the side hustle to a full-time job, Bego said.

“It comes down to time, luck and consistency,” Bego said. “I love this because you don’t have to work for anybody, and it gives you entrepreneurial and creative freedoms.”