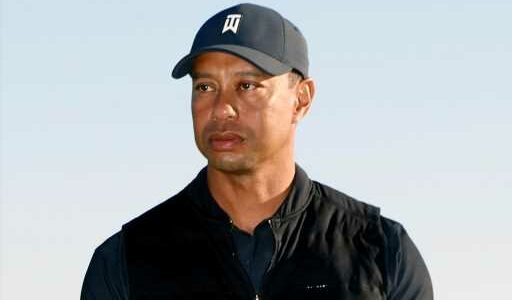 Speaking to the media for the first time since his car crash last February, Tiger Woods declined to address details of the accident but affirmed he is unlikely to return to full-time pro golf.

“As far as playing at the tour level, I don’t know when that’s going to happen,” Woods said. “I’ll play a round here and there.”

During the 38-minute news conference (watch it below) at the Hero World Challenge, a PGA Tour stop in the Bahamas, Woods repeatedly emphasized the pain and difficulty of his recovery. Even once he started chipping and putting in the back yard, he asked workers at his house to fill the hole with sand so he wouldn’t have to bend over as far to retrieve the ball. The comments from Woods built on an interview released Monday by Golf Digest, in which he declared he would never return to full-time pro golf. He also revealed that it had been a “50-50” call as to whether that he would need to have his right leg amputated. Removing the leg “was on the table,” he said at the news conference. While he appeared calm and in good physical shape, wearing a black patterned Nike golf shirt that revealed well-conditioned arms, he told one reporter he was feeling pain just sitting there. “My leg hurts and my back hurts,” he said.

A high rate of speed was cited by authorities last April as the culprit in the single-vehicle crash, which occurred on a residential street in Palos Verdes, CA. Returning from a video shoot at a nearby golf club, Woods lost control of his SUV and swerved across multiple lanes, rolling over into a shallow ravine next to the road. Apart from occasional dispatches on social media, Woods has not spoken publicly or done interviews since the day of the accident.

Asked multiple times about the crash itself, Woods declined to discuss it, saying he had spoken with investigators and that his account of the accident would be contained in their reports.

He reflected on the process of undergoing an excruciating medical process while also being the subject of intense media scrutiny. “A lot of things in my body hurt at that time,” he said. Apart from watching sports on TV, he deliberately avoided watching any coverage of his situation. “I didn’t want to have my mind go there yet, it wasn’t ready.”

Woods acknowledged, “People are going to poke and prod and want to know more about my business. I understand that. They can poke and prod at me all they want, just stay away from my family.”

The nine-month absence of Woods from the sport of golf has ushered in just one more dramatic chapter for the athlete, who is tied with Sam Snead with 82 all-time PGA Tour wins. He has won 15 major championships, three fewer than all-time leader Jack Nicklaus.

After bursting onto the scene in his 20s, Woods eventually encountered major health problems, enduring 10 surgeries by his own account for severe leg and back ailments. He managed to return multiple times to the top echelon of golf after bouts with injury and his comebacks made him even more of a TV ratings and pop culture draw. Along the way, though, he also became a tabloid fixture after the spectacularly public dissolution of his marriage in 2009 amid reports of numerous extramarital liaisons. More recently, he has refashioned his image as that of a doting father. One lasting tableau is his kids greeting him along the 18th green at Augusta National Golf Club in 2019 after Woods won the tournament, punctuating his latest comeback.

Woods referred to his children repeatedly during the news conference, musing that they had known him primarily during his time of physical setbacks and middle age as opposed to the fiery fist-pumping champion who revolutionized the sports world.

“Am I going to put my family through it again, am I going to put myself out there again?” Woods said, referring to his outlook for another comeback. “We had a talk within the family and all of us sat down and said if this leg co-operates and I get to the point where I can play the tour, is it OK with you guys if I try and do it? The consensus was yes. Internally, I haven’t reached that point. I haven’t proven it to myself yet.”