“Hopefully we will continue to see a decrease in cases and qualify for the Yellow tier three weeks from now,” said Los Angeles County Public Health Director Barbara Ferrer on Monday.

As Deadline outlined on Friday, California is set to meet a vaccination metric this week that will drop thresholds for counties to progress to less restrictive tiers in the state’s reopening tiers. When that happens, the key requirement for progressing from the Orange to Yellow tier will ease. Instead of needing just 1 daily new case of Covid-19 per 100,000 residents, counties can be as high as 2 new cases per 100,000.

See the chart below for a breakdown of the loosened tier thresholds. L.A. County already meets the other two Yellow-tier requirements — positive tests countywide and positive tests among the lowest quartile. Los Angeles County’s new case rate as of last week was 3.1 per 100,000 residents. Orange County’s case rate on Friday was 2.8 per 100,000.

Ferrer has frequently been more cautious than her peers in other California counties when it comes to reopening. While Orange County health experts allowed that region to move to Red last month, as soon as the county was eligible, Ferrer kept L.A. in the most restrictive Purple tier for five more days in order to make sure health officials had seen three weeks of data — a period in line with recommendations tied to the life cycle of Covid-19 infections.

And there are reasons for caution, as cases nationwide tick up for the first time in weeks and California sees variants of concern — like the “double mutant” detected over the weekend — spreading within its borders.

As a result, L.A. has once again lagged Orange County this past week in moving from the Red to the Orange, but Ferrer announced on Monday that the region had officially made the move.

“We haven’t seen any increases from the Red tier reopening,” she said. “In general, the state has still indicated that they plan for counties to remain for three weeks in a tier before they qualify for a new tier.”

Crossing into the Orange tier means local movie theaters can up attendance to 50% of capacity or 200 patrons, whichever is fewer. Some Angelenos are already anticipating the next jump as numbers continue to improve.

“I don’t think we will qualify to move into the Yellow tier this week,” Ferrer continued, before noting that it takes two consecutive weeks of lowered numbers to officially qualify for a tier. “Which means we will likely be in the Orange tier for the next three weeks.”

Even so, if Los Angeles and Orange Counties proceed soon into the Yellow quadrant of the state’s guidelines, it would mean the difference between reopening at 25% and 35% capacity for Disneyland when the park unchains its gates on April 30. Likewise for Magic Mountain and Universal Studios Hollywood, which will both be open before then, but would surely welcome the increased attendance.

For a sense of how movement from Orange to Yellow will impact sectors like concerts, sporting events and movie premieres, see the charts below. 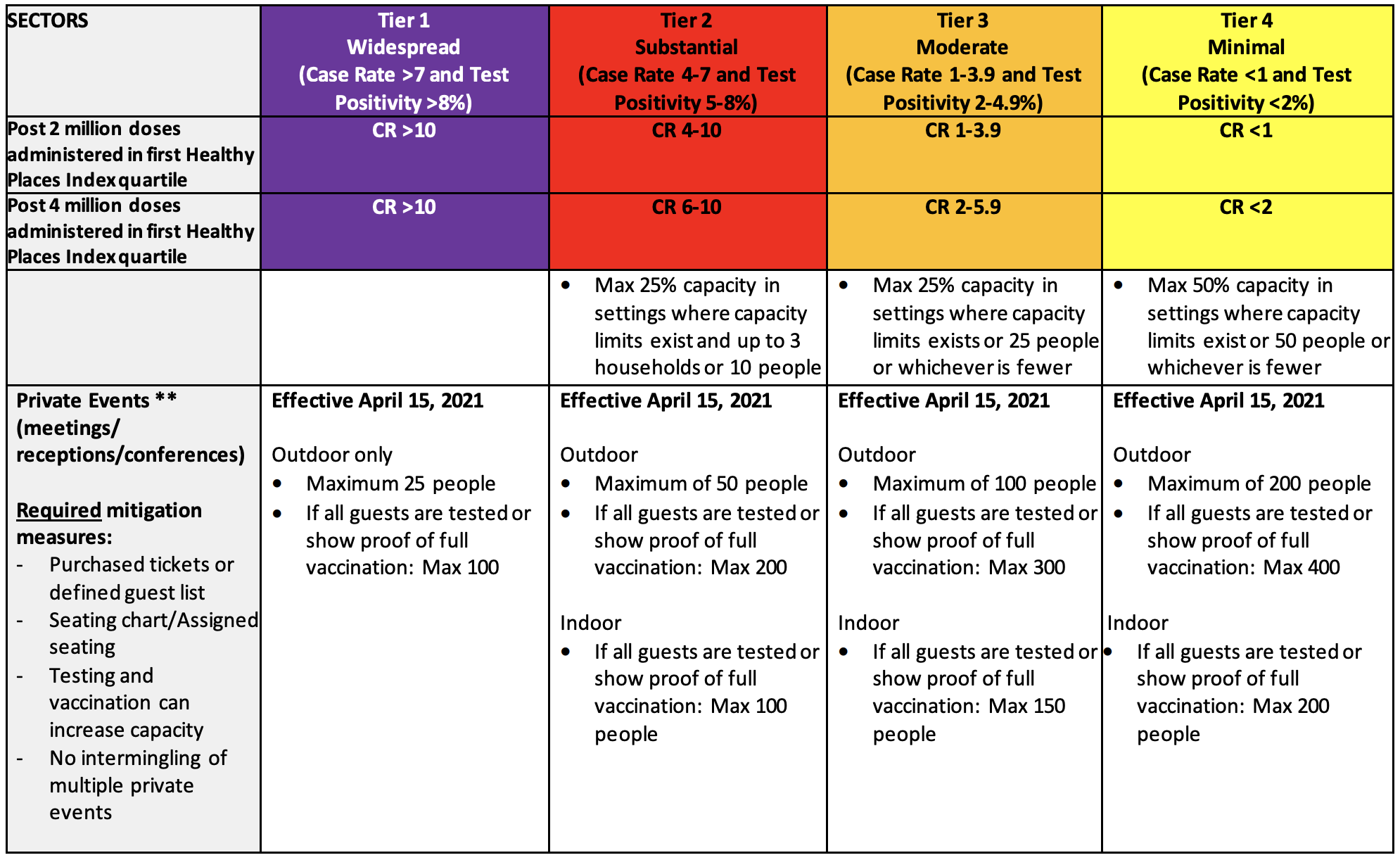 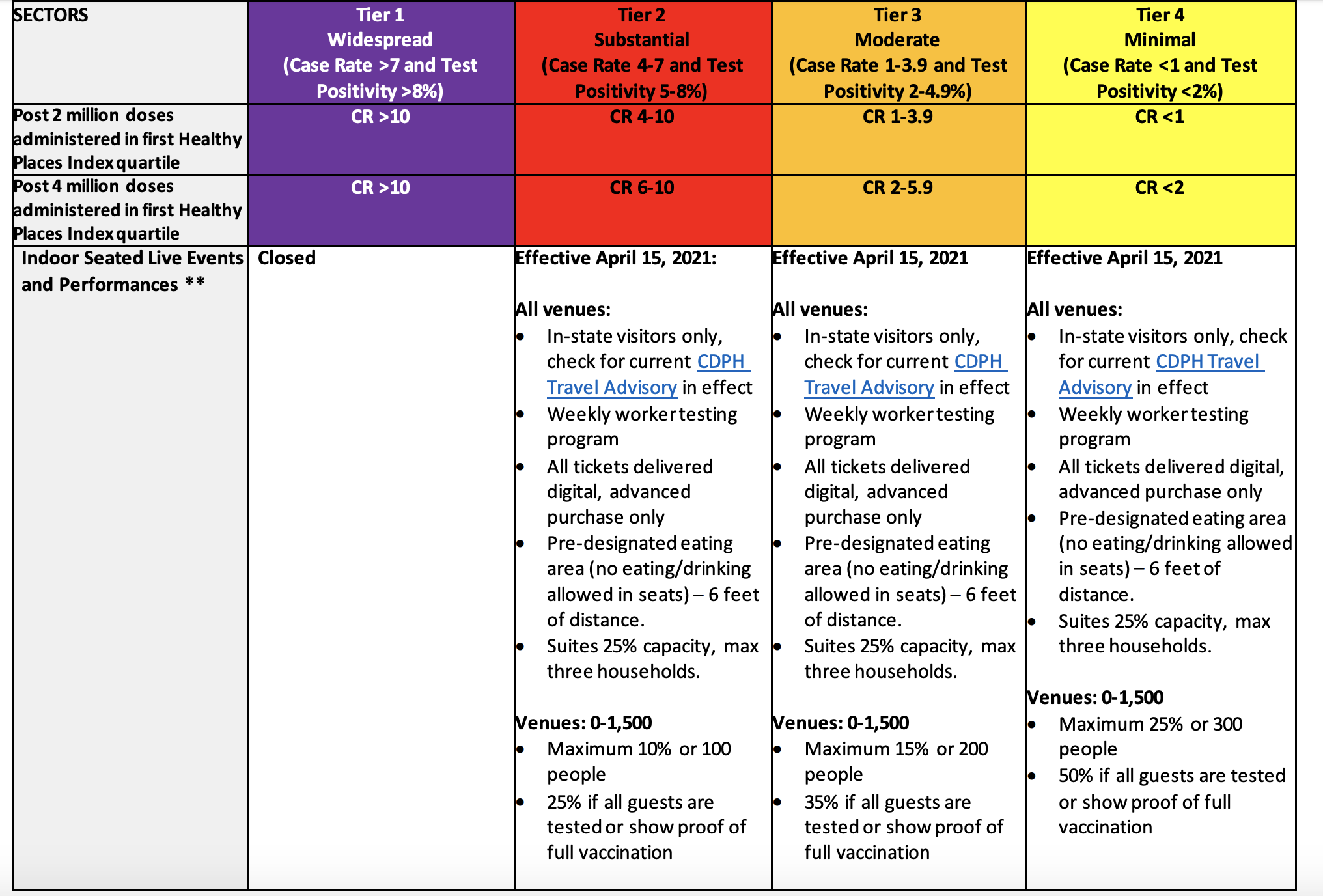