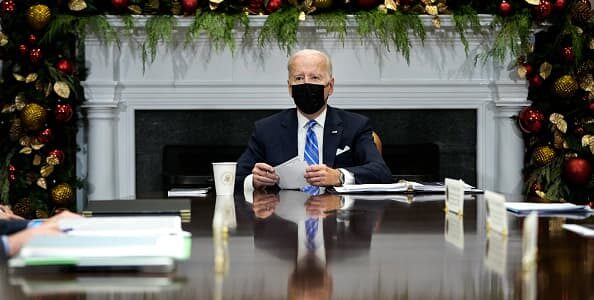 The White House will deploy 1,000 military medical personnel to support hospitals facing a surge of patients infected with Covid this winter, and will purchase 500 million at-home tests that Americans can order online for free with delivery beginning in January, according to senior administration officials.

President Joe Biden will announce the plan in a speech later Tuesday addressing how the administration is preparing for the highly contagious omicron variant of Covid-19. Biden warned last week that the unvaccinated face a winter of "severe illness and death," calling on them to get immunized and to receive a booster shot to protect their health.

Hospitals from the Great Lakes to the Northeast are already struggling after getting hit by a wave of patients infected with the delta variant in November and December. Public health officials now fear the omicron variant will overwhelm healthcare providers with another wave of patients.

The Centers for Disease Control and Prevention on Monday reported that omicron is rapidly spreading and is now the dominant variant representing 73% of U.S. cases, while the delta variant makes up 26.6% of infections. Just a week earlier, delta represented 87% of cases.

The omicron variant's rapid sweep of the U.S. in the middle of the busy holiday travel season has cast uncertainty over people's plans to gather with family. Americans searching for at-home tests to make sure they're not infected before traveling to celebrate the holidays have found shelves in many pharmacies across the country empty amid a nationwide shortage of kits.

The Biden administration will set up a website where Americans can order free at-home tests for delivery to their homes, but those kits will not be ready for delivery until January. A senior administration official said the White House is still finalizing the details.

CDC estimates 13% of all cases in NY and NJ could be omicron infections, Director Walensky says

"The first delivery of these tests from the manufacturers will arrive in January, we're setting up a free and easy system to get those tests out to Americans, including the website," the senior administration official said. "We're actively working to finalize those distribution mechanisms, and we'll share more details in the weeks ahead on that."

The United Kingdom delivers free at-home tests to people who request them. When asked in a Dec. 6 press briefing why the U.S. doesn't do the same, Psaki questioned the cost of such a plan.

The Big Apple is the epicenter of omicron infections right now. Mayor Bill de Blasio over the weekend called on the administration to use the Defense Production Act to ramp up test production and help buttress the city's testing capacity.

"We're finding the supplies are becoming a challenge because all over the country, testing is going up suddenly and we're seeing a supply problem that needs to be addressed," de Blasio said on Monday.

The troops deployed to hospitals will include doctors, nurses, paramedics and other personnel during January and February as needed, the senior administration officials said. The White House is also deploying six emergency response teams to Michigan, Indiana, Wisconsin, Arizona, New Hampshire and Vermont, the officials said.

Biden is also activating response teams from the Federal Emergency Management Agency to work with states to expand hospital bed capacity paid for by the federal government, the officials said. FEMA is ready to deploy hundreds of ambulances and emergency medical teams to help move patients between hospitals if a facility reaches capacity, the officials said.

The overwhelming majority of people hospitalized with Covid are unvaccinated. White House chief medical advisor Dr. Anthony Fauci and CDC Director Dr. Rochelle Walensky have repeatedly stressed the importance of getting fully vaccinated and receiving a booster dose if eligible ahead of the holiday season.

The White House is expanding its vaccination campaign, opening new pop-up clinics in areas of high demand and deploying federal vaccination teams across 12 states, tribes and territories. Currently, 61% of Americans are fully vaccinated against Covid, and about 30% of the fully vaccinated have received a booster dose, according to CDC data.

Omicron is more transmissible than delta, but much is unknown about how sick it makes people. While vaccinated patients who are infected with breakthrough omicron infections are generally reporting mild symptoms, infectious disease experts and the World Health Organization have cautioned against assuming the variant is less severe than previous strains.