Union Loss May Bring New Phase of Campaign Against Amazon

The lopsided vote against a union at Amazon’s warehouse in Bessemer, Ala., was a major disappointment to organized labor, which regards the fight with Amazon as central to labor’s survival. Yet the defeat doesn’t mark the end of the campaign against Amazon so much as a shift in strategy.

In interviews, labor leaders said they would step up their informal efforts to highlight and resist the company’s business and labor practices rather than seek elections at individual job sites, as in Bessemer. The approach includes everything from walkouts and protests to public relations campaigns that draw attention to Amazon’s leverage over its customers and competitors.

“We’re focused on building a new type of labor movement where we don’t rely on the election process to raise standards,” said Jesse Case, secretary-treasurer of a Teamsters local in Iowa that is seeking to rally the state’s Amazon drivers and warehouse workers to pressure the company.

The strategy reflects a paradox of the labor movement: While the Gallup Poll has found that roughly two-thirds of Americans approve of unions — up from half in 2009, a low point — it has rarely been more difficult to unionize a large company.

One reason is that labor law gives employers sizable advantages. The law typically forces workers to win elections at individual work sites of a company like Amazon, which would mean hundreds of separate campaigns. It allows employers to campaign aggressively against unions and does little to punish employers that threaten or retaliate against workers who try to organize.

Lawyers representing management say that union membership has declined — from about one-third of private-sector workers in the 1950s to just over 6 percent today — because employers have gotten better at addressing workers’ needs. “Employees have access to the company in order to express any concerns they might have,” said Michael J. Lotito of the firm Littler Mendelson.

But labor leaders say wealthy, powerful companies have grown much bolder in pressing the advantages that labor law affords them.

Before Amazon, few companies better epitomized this posture than Walmart, which union leaders targeted in the 1990s and 2000s, convinced that the retail giant was driving down wages and benefits across the retail industry.

Walmart, in turn, took sometimes drastic steps to keep unions at bay. In 2000, after a small group of meat cutters at a Texas store decided to unionize, the company eliminated the position across other stores. Five years later, when workers at a Walmart in Quebec were seeking to join the United Food and Commercial Workers union, the company shut the store. Walmart said the store was not performing well financially.

“Everywhere they tried, they were defeated,’’ Nelson Lichtenstein, a labor historian at the University of California, Santa Barbara, said of the unions. “Walmart would send teams to swamp the stores to work against a union. They are good at it.”

As with Walmart, labor leaders believed it was critical to establish a foothold at Amazon, which influences pay and working conditions for millions of workers thanks to the competitive pressure it puts on rivals in industries like groceries and fashion.

But the labor movement’s failure to make inroads at Walmart despite investing millions of dollars has loomed over its thinking on Amazon. “They felt so burned by trying to organize Walmart and getting basically nowhere,” said Ruth Milkman, a sociologist of labor at the Graduate Center of the City University of New York.

It was only a relatively small, scrappy union, the Retail, Wholesale and Department Store Union, that felt the election in Alabama was worth the large investment. As the votes were being tallied, Stuart Appelbaum, the union’s president, attributed the one-sided result to a “broken” election system that favors employers.

Amazon saw things differently. “It’s easy to predict the union will say that Amazon won this election because we intimidated employees, but that’s not true,” the company said in a statement. “Our employees made the choice to vote against joining a union. Our employees are the heart and soul of Amazon, and we’ve always worked hard to listen to them.”

Yet even as elections have often proven futile, labor has enjoyed some success over the years with an alternative model — what Dr. Milkman called the “air war plus ground war.”

The idea is to combine workplace actions like walkouts (the ground war) with pressure on company executives through public relations campaigns that highlight labor conditions and enlist the support of public figures (the air war). The Service Employees International Union used the strategy to organize janitors beginning in the 1980s, and to win gains for fast-food workers in the past few years, including wage increases across the industry.

“There are almost never any elections,” Dr. Milkman said. “It’s all about putting pressure on decision makers at the top.”

In some respects, labor’s effort to gain traction at Amazon had begun to follow this playbook before the campaign in Alabama. In early 2019, Mr. Appelbaum’s union, working with nonprofit organizations, local politicians and other labor groups, helped scuttle a deal that would have brought a second Amazon headquarters to New York by drawing attention to the company’s anti-union posture.

That fall, several nonprofit groups formed a coalition, called Athena, to help persuade Americans that the company was a monopolist and that it exploited workers. And during the pandemic, Amazon workers around the country have joined groups and staged walkouts to amplify their concerns about safety and pay.

Labor leaders and progressive activists and politicians said they intended to escalate both the ground war and the air war against Amazon after the failed union election, though some skeptics within the labor movement are likely to question the wisdom of spending more money. Large unions still take in tens or even of hundreds of millions of dollars a year in dues, but in many cases the revenues are declining.

More than 1,000 Amazon workers across the country have contacted the retail workers union in recent months and many appear to be girding for confrontation with the company.

Mr. Appelbaum said in an interview that elections should remain an important part of labor’s Amazon strategy. “I think we opened the door,” he said. “If you want to build real power, you have to do it with a majority of workers.”

But other leaders said elections should be de-emphasized. Mr. Case said the Teamsters were trying to organize Amazon workers in Iowa so they could take actions like labor stoppages and enlist members of the community — for example, by turning them out for rallies. 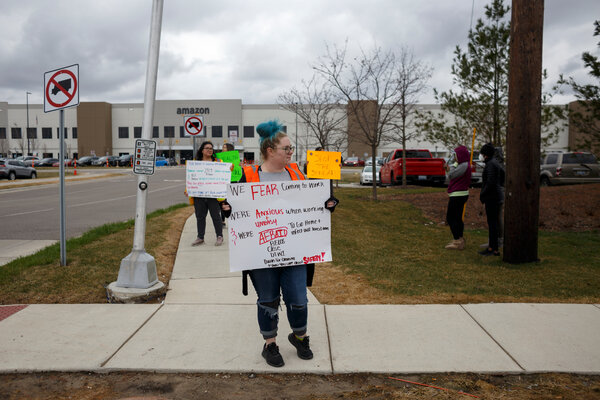 Late last year, a nonprofit group called the Solidarity Fund invited tech industry workers to apply for stipends that would help fund their organizing efforts. According to Jess Kutch, the group’s executive director, Amazon employees claimed about half of the roughly $100,000 that the group has distributed, reflecting the growing activism of its employees.

As for external pressure, progressive groups said they intended to draw attention to a broad range of concerns about Amazon, from its power over small businesses to the potentially questionable uses of its home security technology, Ring.

“We will be raising questions around Ring and the breadth of agreements they have with local police departments,” as they relate to surveillance of people of color, said Lauren Jacobs, a longtime labor organizer who now runs the Partnership for Working Families, a network that seeks to reduce economic inequality and that is a co-founder of the Athena coalition.

Many labor officials urged Congress to increase its scrutiny of Amazon’s labor practices, including its use of mandatory meetings, texts and signs to discourage workers in Alabama from unionizing. “There have to be consequences for people like Bezos,” said Richard Bensinger, a former A.F.L.-C.I.O. organizing director who is advising workers at other Amazon facilities, referring to Jeff Bezos, the company’s founder. “We need congressional hearings to publicize this stuff.”

Some members of Congress indicated that they would heed this call. “How long will Jeff Bezos thumb his nose at the United States Senate?” Senator Elizabeth Warren of Massachusetts said in an interview, citing Mr. Bezos’s refusal to appear at a recent Senate hearing on executive pay. “He has done it in the past, but the winds are blowing from a different direction today.”

Other labor leaders said the loss in Alabama should prompt Congress to rewrite labor law to make it easier for workers to form unions. The Protecting the Right to Organize Act, or PRO Act, which the House passed last month, would outlaw mandatory anti-union meetings and impose penalties on employers who violate labor law. (There are currently no financial penalties for doing so.)

But after Bessemer, many labor leaders think Congress should go further, letting workers unionize companywide or industrywide, not just by work site as is typical. The loss “can be an opportunity to look beyond the PRO Act and why we need labor law with a focus on the sector,” Larry Cohen, chairman of the progressive advocacy group Our Revolution and a former president of the Communications Workers of America, said in a text message.

Mary Kay Henry, president of the Service Employees International Union, agreed that the key to taking on a company as powerful as Amazon was to make it easier for workers to unionize across a company or industry. “It’s not going to happen one warehouse at a time,” she said.

But Ms. Henry said workers and politicians could pressure Amazon to come to the bargaining table long before the law formally requires it — in the same way that President Biden warned that there should be no intimidation or coercion during the Alabama union election.

“It would be incredibly powerful if Biden and Secretary of Labor Marty Walsh called on McDonald’s and Amazon and other major corporations to set a bargaining table with workers and government and they would help support it,” she said.