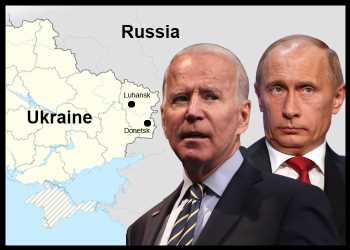 The United States has imposed financial sanctions against eastern Ukraine’s breakaway regions of Donetsk and Luhansk in response to Russia recognizing these rebel territories.

Washington has indicated that tough sanctions targeting Russia were ready if necessary.

President Joe Biden on Monday signed an executive order to “prohibit new investment, trade, and financing by U.S. persons to, from, or in the so-called DNR and LNR regions of Ukraine,” the White House said, referring to Donetsk and Luhansk.

The order will “provide authority to impose sanctions on any person determined to operate in those areas of Ukraine.”

The Department of the Treasury is issuing six General Licenses to ensure that humanitarian and other related activity can continue in these regions.

Senior Administration Officials said at a press call that the U.S. Government will take further measures Tuesday “to hold Russia accountable for this clear violation of international law and Ukraine’s sovereignty and territorial integrity, as well as of Russia’s own international commitments.”

White House Press Secretary Jen Psaki said, “these measures are separate from and would be in addition to the swift and severe economic measures we have been preparing in coordination with Allies and partners should Russia further invade Ukraine.”

The latest developments impacted oil and gas prices, which went up over fears of disruption in supplies. The price of Brent crude reached a seven-year record high price of $99.38 per barrel on Tuesday.

In an emotionally charged late-night televised speech from the Kremlin, Putin made a scathing attack of the West.

Putin has ordered troops into Donetsk and Luhansk for “peacekeeping functions.” Russian military vehicles are reportedly heading towards the Ukrainian border.

“This wasn’t a speech just about Russia’s security, it was an attack on the very idea of a sovereign and independent Ukraine,” according to the White House.

Russian troops have continued to move closer to the border in what looks like plans for an invasion at any moment, most likely in response to attacks Russia falsely claims are occurring in the Donbas, it added.

“We will continue to consult with our Allies and partners about both diplomatic solutions and the consequences we will impose on Russia should it further invade Ukraine,” Senior Administration Officials told reporters.