Home » Economy » A not-so-merry Christmas? Inflation is the Grinch of 2022

A not-so-merry Christmas? Inflation is the Grinch of 2022

Christmas is just around the corner. And at the risk of sounding like the Grinch, this holiday season is going to cost more than the last due to the economic scourge of inflation.

But inflation affects some things more than others, so not everything under the tree, or in the festive spread of food and drink , will cost a whole lot more. I’ll explain why in a bit. 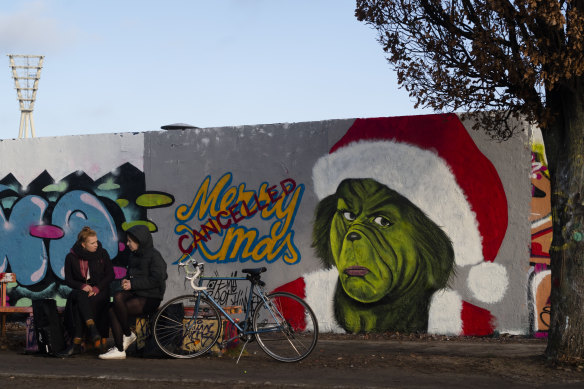 Inflation could spoil Christmas for many. Credit:AP

Firstly, the bad news. Inflation is forecast by the Reserve Bank to reach a peak of 8 per cent by the time the turkey is on the table.

It’s currently 7.3 per cent and rising, according to the Bureau of Statistics, and while it’s driven largely by the cost of new homes, a big part is also higher food prices.

These higher food prices have been driven by terrible weather across the country. Floods in northern Victoria and through NSW have affected growers of wheat and stone fruits, including the Christmas favourite of cherries.

Producers say the rain and recent hail has delayed the start of the stone fruit season, but the damage has also reduced expected yields, which means higher prices when the fruit finally hits shelves later in summer.

Vegetables are also more expensive for this reason – inflation in vegetables has grown 17.2 per cent over the year to September, while fruit inflation has risen 14.6 per cent. That is likely to remain high over the next couple of months, due to the more recent extreme weather in NSW.

The price pressure on other Christmas lunch or dinner staples is a bit lower, and particularly if prawns are a holiday staple – seafood inflation has only grown by 5.8 per cent over the 12 months to September.

There is more Christmas cheer in store because in slightly better news, gifts for those trading presents shouldn’t be too much more expensive – depending on what you buy.

In fact, inflation for games, toys and hobbies actually fell by 3.4 per cent over the last 12 months. We import the majority of our kids’ toys and board games, which generally arrive on our shores in shipping containers. The pandemic disrupted the normal movement of cargo around the world, which helped the price of shipping containers to wild highs. With the end of most border closures, the price has now fallen back to near pre-pandemic levels.

So last Christmas, toys were in short supply. This time around, they’re easier to get your hands on.

There are whole streets in suburbs around the country that get into the Christmas spirit with eye-wateringly bright light displays which add some heft to the power bills of those houses.

That will be even larger this year, thanks to soaring prices driven in part by the war in Ukraine. In the budget, the government forecast energy prices would rise by 56 per cent over the next 18 months, and those price increases are already being felt as power bills come through.

This is also the first summer in three years that won’t be affected by state border closures and lockdowns, and interstate or overseas travel is on the cards for many. Sorry to say, but that has also considerably risen in price.

For those looking to a tropical holiday in south-east Asia or a winter getaway in Europe, prices have soared by more than 25 per cent over the 12 months to September, as airlines deal with capacity constraints and high fuel costs while consumer demand takes off following two years of border closures.

Domestic travel for people going to visit friends and family is better, but with inflation in that category at 10.8 per cent (and Christmas-time flights are never cheap) it’s not exactly a budget option.

In good news, inflation for services hasn’t risen as much. That’s because service costs are largely affected by wages, and recent data shows they rose by an average of 3.1 per cent in the 12 months to September. So a voucher for a manicure shouldn’t be too expensive, and movie and concert tickets have also not risen as high as tangible goods.

Where is inflation headed from here? Thankfully, according to the Reserve Bank and Treasury, it’ll start falling after Christmas. Although a largeish caveat on the outlook is they expect no major shocks (think country-wide lockdowns, or a new conflict), the Reserve Bank forecasts inflation will drop to 4.7 per cent come next Christmas.

But it’s worth noting, its not just inflation that is expected to fall as the economy slows – household consumption is also set to drop, the unemployment rate will rise slightly and our imports and exports will fall.

While the central bank and Treasury don’t believe Australia will fall into recession, it does mean things will be a bit financially tougher for next Christmas. So it might be good to enjoy this summer while we can.

Ross Gittins is on leave

The Opinion newsletter is a weekly wrap of views that will challenge, champion and inform your own. Sign up here.