Home » Economy » A trade deal with India would be Australia’s ‘most important’: Abbott

A trade deal with India would be Australia’s ‘most important’: Abbott

Former prime minister Tony Abbott says a proposed pact to liberalise trade between Australia and India would be the nation’s most important trade deal and enhance the developing Quad security partnership.

Negotiations for an Australia-India comprehensive economic cooperation agreement were launched more than a decade ago but stalled in 2015. Talks recently revived and the two governments have flagged an interim announcement by December. 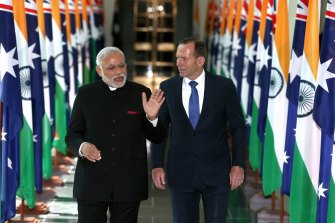 Mr Abbott, who recently met with Indian Prime Minister Narendra Modi, told a roundtable meeting of the Australia-India Chamber of Commerce that the relationship between Australia and India had not reached its full potential despite the two having “complimentary” economies.

“If we can pull this deal off it will actually be the most important trade deal that we have done,” he said.

Mr Abbott said an India-Australia trade deal would be “a very important economic component” of the developing Quadrilateral security partnership involving Australia, India, Japan and the US. Leaders of these nations met in person for the first time in Washington earlier this month.

“I think this trade deal, this trade relationship, has a significance and resonance that goes well beyond that for our two countries,” Mr Abbott said of the proposed Australia-India economic pact.

As prime minister Mr Abbott struck a free trade deal with Australia’s biggest trading partner, China, and lauded it as one of his government’s biggest achievements. But amid growing tensions between Beijing and Canberra Mr Abbott told a British audience in July that he could not “imagine that China and Australia would contemplate concluding a trade deal today”.

The political and security relationship between Australia and India has improved steadily during the past decade but growth in trade and business ties have been more subdued. India’s economy, Asia’s third largest, is expected to grow strongly in future. India purchased $19 billion worth of Australian goods and services in 2019-20 making it our sixth biggest export market. But that was just 11 per cent of the value of Australian exports to China that year.

Australia’s High Commissioner to India, Barry O’Farrell, who also participated in the roundtable, said the disruption to supply chains caused by the COVID-19 pandemic and the changing geostrategic environment meant there are new opportunities to advance the economic relationship between India and Australia.

“Australia’s commitment to lift the economic component of our relationship [with India] I don’t think has ever been strong or had the same priority as it has today,” he said.

The federal government sent Mr Abbott to India in August as part of a push to revive the trade talks. During the visit he met with Mr Modi who later posted a Tweet saying the pair had discussed ways to “energise our trade and economic relationship”.

In late August Trade Minister Dan Tehan and his Indian counterpart Piyush Goyal, announced trade negotiators would meet as often as required in a bid to reach an interim “early harvest” announcement by December that would pave the way for a future comprehensive agreement. Mr Tehan will visit India this week and is due to meet with Mr Goyal.

Mr O’Farrell said the government is “determined to get that early harvest [announcement] by the end of the year”.

India’s High Commissioner to Australia, Manpreet Vohra, who also attended the meeting, said there was “a lot of action happening right now” in the negotiations but indicated there were still some differences between the two sides on aspects of the deal including services trade.

“No deal would work unless it is seen as a win-win,” he said.

The Morning Edition newsletter is our guide to the day’s most important and interesting stories, analysis and insights. Sign up here.