Home » Economy » Biden’s booming economy is far from normal, and that poses a problem

Biden’s booming economy is far from normal, and that poses a problem

The US economy is growing at its fastest clip in a quarter-century, yet it remains far from normal, with some workers and small-business owners facing increasingly tough times while others thrive. That divergence poses a challenge to President Joe Biden, who has promoted the nation’s economic recovery as a selling point in his quest to win support for a multitrillion-dollar spending agenda that could cement his legacy.

A summer that many business owners and consumers had hoped would bring a return to pre-pandemic activity has delivered waves of disappointment in key areas. Restaurants are short on staff and long on wait times. Prices have spiked for food, petrol and many services. Shoppers are struggling to find used cars. Retailers are struggling to hire. Beach towns are jammed with tourists, but office towers in major cities remain ghost towns on weekdays, with the promised return of workers delayed by a resurgent coronavirus. 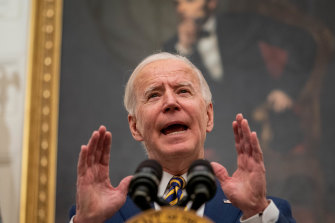 The US economy is recovering at historic rates but troubling signs are emerging.Credit:Bloomberg

The University of Michigan’s Consumer Sentiment Index suffered one of its largest monthly losses in 40 years in August, driven by the rapidly spreading Delta variant and high inflation. The survey’s chief economist, Richard Curtin, said the drop also reflected “an emotional response, from dashed hopes that the pandemic would soon end and lives could return to normal.”

Biden and his advisers are confident that many of those issues will improve in the fall. They expect hiring to continue at a strong pace or even accelerate, fattening worker pay cheques and powering consumer spending. They remain hopeful that a reinvigorated labor market will take the place of the fading stimulus from the president’s $US1.9 trillion  economic aid bill signed in the spring, and that the latest wave of the virus will not dampen growth significantly.

On Friday, they released new projections forecasting that growth will hit 7.1 per cent this year after adjusting for inflation, its highest rate since 1983.

“Our perspective is one of looking at an economy that is growing at historic rates,” Brian Deese, the director of Biden’s National Economic Council, said in an interview.

But there is mounting evidence that the coming months of the recovery could be more halting and chaotic than administration officials predict, potentially imperiling millions of left-behind workers as their federal support runs dry.

Private forecasters have pared back growth expectations for the end of the year, citing drags on spending from the spread of the Delta variant and from the nationwide expiration of enhanced unemployment benefits next Monday. Emerging research suggests the end of those benefits might not immediately drive Americans back to the workforce to fill the record level of open jobs nationwide.

“People will be surprised at how much the economy decelerates over the next year as the stimulus boost fades,” said Jim O’Sullivan, the chief US macrostrategist for TD Securities.

Administration officials do acknowledge some potential hurdles. Some big-city downtowns may never return to their pre-pandemic realities, and the economy will not be fully “normal” until the virus is fully under control. They stress that increasing the nation’s vaccination rate is the most important economic policy the administration can pursue to accelerate growth and lift consumer confidence, which has slumped this summer.

There is mounting evidence that the coming months of the recovery could be more halting and chaotic than administration officials predict, potentially imperiling millions of left-behind workers as their federal support runs dry.

“I don’t want to put a timeline on this,” said Cecilia Rouse, the chair of the White House Council of Economic Advisers. “We won’t feel totally completely normal until we have, whether we want to call it herd immunity or a greater fraction or percentage of the American population is vaccinated.”

“As we conquer the virus,” she said, “we will regain normalcy.”

The economy’s rebound this year has been stronger than almost anyone predicted, a result of the initial wave of vaccinations and the boost from Biden’s stimulus bill. Gross domestic product returned to its pre-pandemic level last spring, and retail sales have soared far beyond their pre-COVID path.

Yet the recovery remains uneven and rattled by a rare set of economic crosswinds. In some sectors, consumer demand remains depressed. In others, spending is high but supply constraints — whether for materials or workers or both — are pushing up prices.

For instance, the construction sector has regained most of the jobs lost early in the pandemic, and other industries, such as warehousing, have actually grown. But restaurants and hotels still employ millions fewer people than they did in February 2020. The result: There are more college graduates working in the United States today than when the pandemic began, but 5 million fewer workers without a college degree. 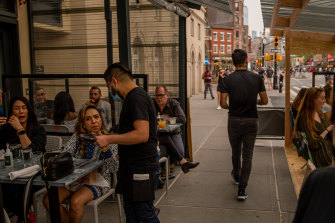 A cafe in New York, where restaurants are among the many businesses around the world grappling with labour shortages. Credit:Bloomberg

Compounding the problem, employment in the biggest cities fell further than in smaller cities and rural areas, and it has rebounded more slowly. Employment among workers without a college degree living in the biggest cities is down more than 5 per cent since February 2020, compared with about 2 per cent for workers without a college degree in other parts of the country.

Even as millions of people remain out of work, businesses across the country are struggling to fill a record number of job openings. Many businesses have blamed expanded unemployment benefits for the labor shortage. If they are right, a flood of workers should be returning to the job market when the benefits end after Labor Day. But recent research has suggested that the benefits are playing at most a small role in keeping people out of the workforce. That suggests that other factors are holding potential workers back, such as health concerns and child care issues, which might not ease quickly.

The virus remains the biggest wild card for the outlook. There is little evidence in government data that the spread of the Delta variant has suppressed spending in retail stores. But air travel, as measured by the number of people screened at airport security checkpoints, has tailed off in recent days after returning to about 80 per cent of where it was during the same week in 2019.

Restaurant bookings on OpenTable, which had nearly returned to normal in June and July, are back down to 10 per cent below their pre-pandemic level. Data from Homebase, which provides time-management software to small businesses, shows a sharp decline in the number of hours worked at restaurants and entertainment venues.

The variant is already casting a shadow over the new school year, with some schools, including a middle school in Fredericksburg, Virginia, temporarily returning to virtual learning amid new outbreaks.

Urban downtowns, once hopeful for a fall rebound in activity, are bracing for prolonged delays in white-collar workers returning to their offices.

“Our No. 1 job is to get office workers back — that’s the driver of the downtown,” said Paul Levy, the president and chief executive of the Centre City District, a local business-development group in Philadelphia.

Levy’s group estimates that 30 per cent of downtown office workers have returned so far to Philadelphia. It had been expecting that number to hit 75 per cent to 80 per cent after Labor Day and had built an advertising campaign around the idea that the fall would mark a milestone in the return to normalcy. But now major employers such as Comcast have delayed their return dates, worrying business owners.