With the jobs market as tight as it has ever been, employees are offering a much broader range of non-monetary incentives – as well as paying big sign-on bonuses – to attract staff.

The annual skills priority list released last week showed the number of occupations considered to have shortages of workers increased from 153 to 286 over the past year. There were 301,000 job vacancies advertised in August, up by 37 per cent compared to the same month last year. 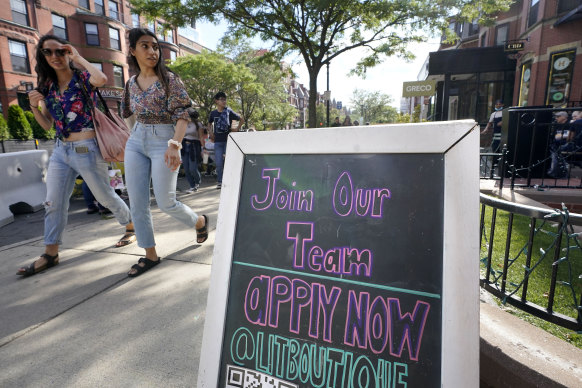 Employers are getting creative to attract people in a tight jobs marketCredit:AP

“The balance of power has shifted from the employer to the employee, with more vacancies than jobseekers,” says Ben Hamer, the head of future of work at professional services company PwC Australia.

Job candidates are in a good position to negotiate some great benefits, in addition to the other things they value such as working with good people, having a good work-life balance and being paid fairly, he says.

Organisations have to sell themselves to potential employees with a ‘value proposition’, Hamer says. “They have not had to think like that for some time now,” he says.

Fintech company Finder allows employees to work from anywhere in the world for up to four weeks a year and employees are eligible to receive equity in the business.

Hamer says more employers are offering sign-on bonuses, sometimes $10,000 or more, as well as retention bonuses, where the bonus is paid on being with the company for a set period of time.

A growing trend over the past decade has been further allowances for employees with pets – including allowing them in the office – a move some employers are responding to by offering subsidised pet insurance to their employees.

Grosvenor Engineering Group mentions discounts on pet insurance and on heath insurance among the perks of working for the Australian and New Zealand company. Hamer expects more Australian companies will follow suit.

Shanyn Payne, chief people officer at Finder, says about half of the fintech’s 500 staff are aged under 34 and many have missed out on travelling, or seeing their family overseas because of the pandemic.

The reason for offering staff up to four weeks a year to work from anywhere in the world, subject to their managers’ approval, is retention, she says. Without it, some of the company’s employees could leave their job at Finder and go overseas to spend extended time with their family.

PwC’s Hamer says the market is “really tight” for graduates, mostly because the companies that employ graduates are looking at expanding their graduate intakes, he says.

“We are going to see a much more intensified grab for graduates and are seeing organisations coming out much earlier than they usually would [to advertise graduate positions],” Hamer says.

As well as pay and flexibility in how they work, with younger workers there is a “big play” around values alignment – this idea of wanting to work for a socially responsible organisation and for their work to matter in society, Hamer says.

Finder’s Payne says she has also noticed that more applicants for jobs at Finder ask about the fintech’s diversity policy. They value flexibility and dislike being told that they have to work in a particular way, she says.