Homebuyers looking to get a foot on the property ladder, but fear missing out as prices in our two largest capital cities become increasingly unaffordable, are urged to consider waiting and use the time to save for a bigger deposit.

Many property experts say the boom may be over and that prices are likely to slide from here. 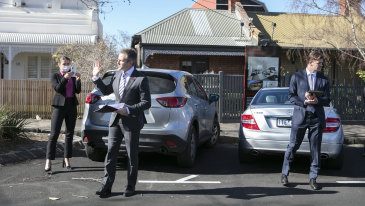 With property prices likely easing in Sydney and Melbourne, first-home buyers may be better off waiting and saving for a bigger depositCredit:Stephen McKenzie

Martin North, founder of Digital Finance Analytics, says: “Prices are likely to ease back from here and so the imperative [for first-home buyers] to catch the runaway train is, in my view, old news.”

“It’s better to be cautious, see what happens to interest rates and prices, as well as income and costs, as many are caught in a pincer movement where the cost of living is rising while wages, in real terms, are not,” North says.

In Sydney and Melbourne, more than 70 per cent of homeowners that North classifies as “young, growing families”, many of which are first-timers, are already under mortgage stress – despite record-low mortgage interest rates.

First-home buyers remain more active than before the pandemic, but their numbers are falling.

Home lending figures from the Australian Bureau of Statistics show the number of new loan commitments by first-home owners, seasonally adjusted, was down 32.6 per cent in January, compared to the same month last year.

The forces that powered the red-hot housing market over the past two years are losing momentum, says Steve Mickenbecker, group executive of financial services at Canstar.

Looming higher mortgage interest rates and a rising cost of living on essential items, such as petrol and food, are leaving potential home buyers with less discretionary income and capacity to borrow.

“There is now a firming expectation of Reserve Bank cash-rate increases later in the year, which should start to slow what has been a strong two-year run in home lending and [property] prices,” Mickenbecker, says.

Westpac this week lifted its fixed-interest mortgage rates for the third time this year, following similar moves by other major banks.

“That shows just how quickly interest rates rise when they start moving off the floor,” Mickenbecker says. “Borrowers have to prepare for multiple [interest-rate] increases and a big leap in repayments.”

Still, previous predictions for significant property price falls have proven to be wrong, and forecasts are not universal across the housing industry.

While some analysts are seeing sizeable declines in Sydney and Melbourne, others, such as My Housing Market chief economist Andrew Wilson and SQM Research founder Louis Christopher, are expecting a “soft landing” for property prices.

They point to the return of mass overseas migration and rising confidence as the economy recovers from the COVID-19 pandemic as reasons why a house price crash is unlikely.

Rents are rising strongly in Sydney – another factor to consider in the decision of whether to become a homeowner.

Figures from Andrew Wilson show rents for Sydney houses rose 11.5 per cent over the past 12 months and unit rents rose by 6.7 per cent. Melbourne house rents are up 4.7 per cent, though rents on Melbourne units are down 3.2 per cent.