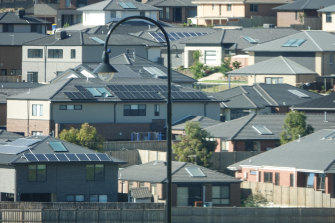 Vacancy rates are low everywhere, particularly in the regions, with some towns having fewer than five dwellings for rent.Credit:Paul Rovere

A good balance between landlords and renters is a vacancy rate of 3 per cent. At less than 2 per cent, landlords are considered to have the upper hand – and renters often have little choice but to pay more when they renew their rental agreement because of the scarcity of alternative accommodation.

In Melbourne, it is a similar story. The dwelling vacancy rate was only 1.9 per cent in April – the same as March – but down from 4 per cent in April last year. There were almost 13,000 available rentals in April compared to 25,000 in the same month a year earlier.

While the tight rental market has already allowed some landlords to increase their rents, there are more increases on the way. That is because landlords with mortgages on their investment properties are facing higher interest rates and, in the current market, can more easily pass on some of their higher repayment costs to tenants.

Financial markets are expecting the Reserve Bank of Australia to follow its 0.5 percentage point rise in the cash rate earlier this month with another increase next month, with several more forecast by economists beyond that.

Another factor making the rental market tight is the re-opening of our international borders and the return of not only migrants and students, but tourists.

New rental possibilities has seen some landlords switch from long-term rentals to the more lucrative short-term rental market on platforms such as Airbnb.

In regional areas, the rental crisis is even worse than in the big cities. For example, in Dubbo, towards central NSW, the vacancy rate in May was just 0.6 per cent, SQM figures show. In Lithgow, west of Sydney, it was a paltry 0.4 per cent, with just nine dwellings available.

The dearth of regional rentals is being driven not only by a lack of supply, but by increasing demand, particularly for detached houses, due to the work-from-home trend and people seeking a better lifestyle, says Arjun Paliwal, head of research at buyers’ agency InvestorKit.

For how long the rental market continues to be tight is hard to estimate. Low vacancy rates and rising rents traditionally attract more property investors into the market, but that may take time to come through the pipeline.

For many investors, it is the prospect of capital gains that is their main reason for investing in the first place. Would-be property investors may now be more inclined to hold off buying if they think prices, which have already started to fall in Sydney and Melbourne, are going to decline further.

Some property watchers are forecasting a peak-to-trough property market price dip of up to 15 per cent.

For renters, the situation is likely to get worse before its gets better. They face ever higher rents on top of increased prices for food, petrol and heating.