SINGAPORE – More people sought to tap the benefits of the Central Provident Fund (CPF) last year to stretch their savings amid the pandemic’s uncertainties.

The number of members who topped up their own or their loved ones’ CPF retirement savings was nearly 40 per cent higher last year, compared with 2019.

At the same time, people who made voluntary housing refunds nearly tripled over the same period, according to the latest CPF Board figures.

Also slightly up is the proportion of members who died last year and had specified a recipient for their CPF savings.

It is no surprise that more people are channelling more cash into CPF accounts, observers told The Straits Times, since they are now realising the benefits of using the scheme to save.

Last year, some 141,130 CPF members made top-ups under the Retirement Sum Topping-Up Scheme, contributing a total of $2.97 billion.

Meanwhile, about 14,980 members made voluntary housing refunds last year, putting in a total of $1.48 billion.

This involves members who had used CPF savings to pay for their property choosing to make a refund of the amount withdrawn.

The higher take-up rate is likely boosted by the lower interest rate environment and market volatility brought about by the pandemic, said DBS Bank’s head of financial planning literacy Lorna Tan, noting that the trend of CPF top-ups is expected to continue.

The Retirement Sum Topping-Up Scheme allows members to use cash or CPF savings to top up their own or their loved ones’ accounts.

For recipients under 55, the Special Account can be topped up to the current Full Retirement Sum, which is $186,000 this year.

Those aged 55 and older can have their Retirement Accounts topped up to the current Enhanced Retirement Sum, which is $279,000 this year.

Mr Wilson Loy, Standard Chartered Bank Singapore’s head of investment advisory and strategy, said another factor for the increase could be the tax reliefs granted for topping up CPF accounts. 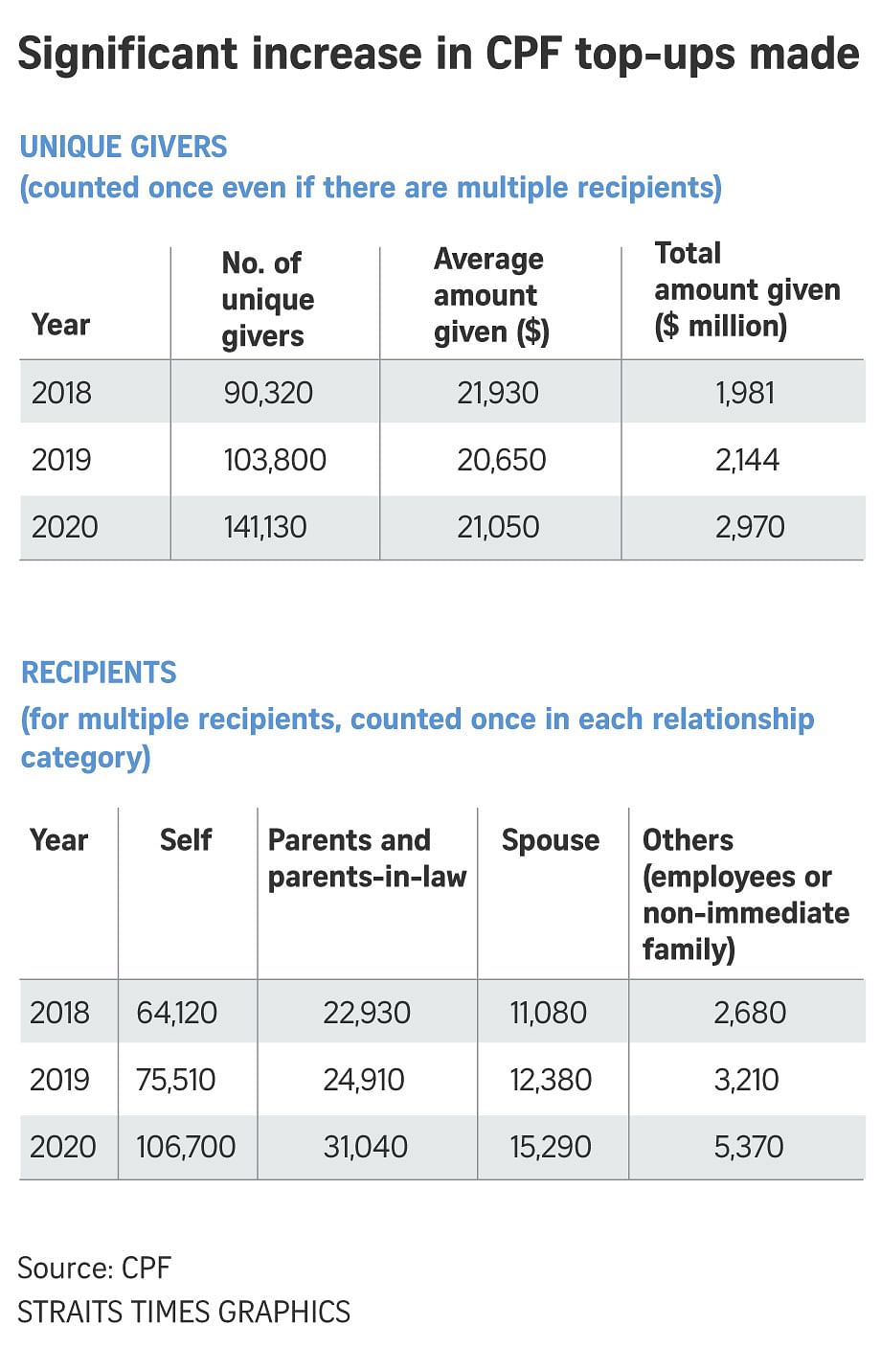 Some people who made top-ups last year said they were attracted to the higher risk-free returns that CPF funds offer.

Mr Joel Siew, who topped up his own CPF Special Account last year, said the 4 per cent interest rate on funds in it is a draw. Like many working adults, the 32-year-old banker believes that starting his retirement planning early will give him better returns over time.

Human resource manager Lydia Ong, 38, who put more money into her CPF Special Account last year, said the pandemic has brought about much uncertainty and volatility in the financial markets.

“In such times, it makes sense to go with something less risky,” she added.