There’s nothing new about buying now and paying later. You can do it with lay-by or a credit card. But the version of it invented by Afterpay, and copied by so many rivals, is so different and so hugely popular it’s not surprising it’s raised eyebrows.

The most obvious reaction is to see it as a new way of tempting young people, in particular, to overload themselves with debt and make their lives a misery. The government should be regulating its providers to limit the harm they do. 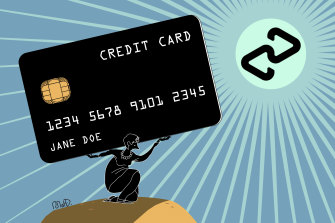 People are jack of credit cards and keen to shift to a less onerous form of BNPL.Credit:Matt Davidson

But to see Afterpay as purely a matter of “consumer protection”, as I used to, is to miss the way this prime example of “fintech” – the use of digital technology to find new ways of delivering financial services – is subjecting the banks and their hugely overpriced credit cards to strong competition from a product many users find more attractive.

And not just that. When you think it through – as I suspect the politicians and financial regulators haven’t – you see that this new approach to BNPL – buy now, pay later – is also threatening the big profits Google and Facebook are making from their stranglehold on online advertising.

The man who has thought it through is Dr Richard Denniss, of the Australia Institute. With Matt Saunders, Denniss has written a paper, The role of Buy Now, Pay Later services in enhancing competition, commissioned by … Afterpay.

Normally, I’m hugely suspicious of “research” paid for by commercial interests, but Denniss is one of the most original thinkers among the nation’s boring economists.

Buying something via Afterpay allows you to receive it immediately, while paying for it in four equal, fortnightly instalments over six weeks. Provided you make the payments on time, you pay no interest or further charge. The fortnightly payments fit with most people’s fortnightly pay.

If you’re late with a payment, you’re charged a late fee that varies from a minimum of $10 to a maximum of $68, depending on how much you’ve borrowed. If you don’t pay the late fee and get your payments up to date, Afterpay won’t finance any more BNPL deals until you have.

If you never get up to date, you’re not charged interest or any further late fees. Eventually, Afterpay ends its relationship with you and writes off the debt.

The individual amounts people borrow are usually for just a few hundred dollars. You can have more than one loan running at a time, but only within the credit limit Afterpay has set, and only if your existing payments are up to date. 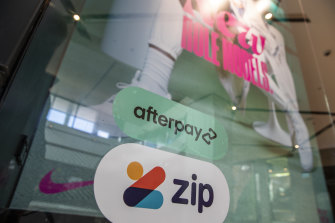 The phenomenon of buy now, pay later was supercharged by the e-commerce boom during the pandemic.Credit:Louie Douvis

Afterpay sets a fairly low limit initially, but increases it as you demonstrate your payment reliability.

So, what’s in it for Afterpay? It charges the shop that sold you the stuff a merchant fee of about 4 per cent of the sale price. I used to suspect they made a lot from their late fees, but these remain a small part of their total revenue, almost all of which comes from merchant fees.

Despite its huge expansion, Afterpay has yet to turn a profit, putting it in the same boat as Uber, Twitter and other digital platforms. Of late, the BNPLs have had greatly increased bad debts and the sharemarket has fallen out of love with them. This doesn’t affect Afterpay, which has been taken over by a big American fintech, Square, which has many other irons in the fire.

Obviously, Afterpay and its imitators are offering a way to BNPL that’s an alternative to a conventional credit card, which involves charging merchants a fee of a couple of per cent, and offering interest-free credit provided you pay your balance on time and in full each month.

Afterpay is genuinely disruptive, offering users what they may justifiably regard as a better product.

If you can’t keep that up – as the great majority of credit-card holders can’t – you get hit with interest on your purchases of an extortionate 20 per cent-plus. These rates haven’t changed in decades while other interest rates have fallen. That’s a sign the banking oligopoly has huge pricing power in the provision of consumer credit.

It seems clear from the declining growth in credit-card debt and the amazing popularity of Afterpay and its imitators that people are jack of credit cards and keen to shift to a less onerous form of BNPL.

Many young adults, in particular, seem to have sworn off credit cards because they’re just too tempting. Behavioural economists call this a “pre-commitment device”. The best way to ensure you don’t end up deep in ever-growing debt is not to have a credit card in the first place.

These people regard Afterpay & Co as a much less risky way to BNPL, a ubiquitous practice economists sanctify as “consumption smoothing”.

Those who want to regulate the new BNPL by stopping providers from prohibiting merchants from charging users a surcharge – the way they stopped Visa and Mastercard from banning surcharging – see this as levelling the competitive playing field between the two different forms of BNPL.

But Denniss’ insight is to point out that the two merchant fees are quite different. The credit-card merchant fee can be regarded as a transaction fee – that is, merely covering administrative costs – but in Afterpay’s case it covers much more than that, to justify its much higher cost.

What Afterpay offers is something marketers understand, but economists have yet to: better “customer acquisition”. Being able to offer free credit is one aid to acquiring customers, but Afterpay does much more to attract customers to those merchants who offer its BNPL service.

Younger consumers like the new BNPL so much they search the internet for sellers of the item they want to buy that also offer Afterpay. Afterpay uses a directory of stores on its website – and also its mobile app – to direct potential customers to participating merchants.

Afterpay also sends messages to its users advertising its merchants’ special offers and the like.

So Afterpay’s merchant fee also provides its merchants with a new form advertising, thus reducing their need for online advertising through Google or Facebook.

Afterpay is genuinely disruptive, offering users what they may justifiably regard as a better product. Regulators should think twice before they seek to discourage it by presenting customers with a misleading comparison: a merchant fee of 4 per cent versus 2 per cent.