The November jobs report is projected to show that hiring topped half a million for the second consecutive month, even as a labor shortage that economists describe as the worst in decades continues to persist.

Payrolls likely increased by 550,000 last month while the unemployment rate likely ticked down to 4.5%, according to a median estimate by Refinitiv economists. The economy added 531,000 jobs in October.

Employment was likely boosted by the holiday hiring season as well as higher wages and sign-on bonuses that employers have offered in order to lure workers back to the office. Millions of Americans remain sidelined from the workforce, and there are actually more open jobs than there are available workers.

"Strong wage growth is expected to be seen in the November jobs report," said Mark Hamrick, a senior analyst for Bankrate. "Workers are welcoming higher pay but are also struggling amid high inflation while seeking better working conditions including flexible hours and the ability to work remotely such as from home, when and where possible."

The projected gain of 550,000 jobs could solidify a decision by Federal Reserve officials later this month to speed up the wind-down of emergency economic assistance – something that Chairman Jerome Powell hinted at this week while testifying before Congress. Powell suggested that as the economy confronts the highest inflation level in decades, central bank policymakers may accelerate the tapering of their bond-buying program. 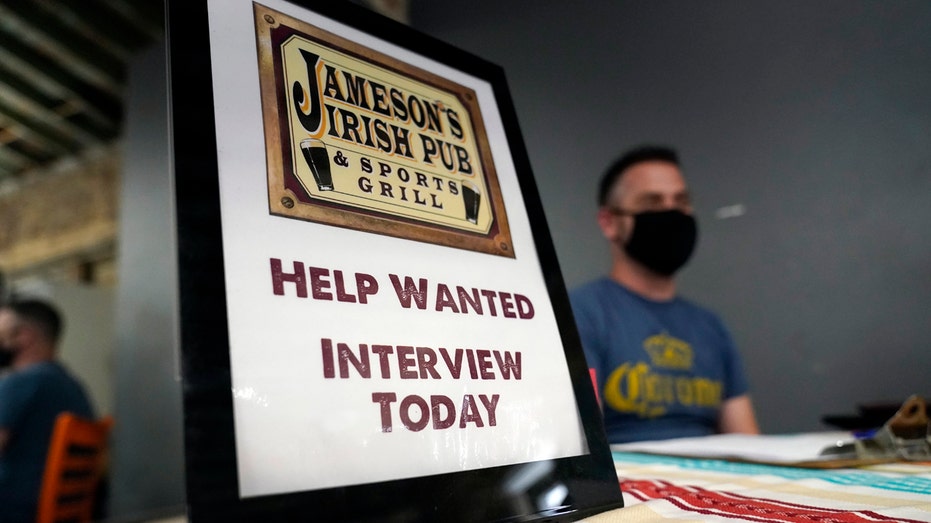 FILE – In this Sept. 22, 2021, file photo, a hiring sign is placed at a booth for Jameson’s Irish Pub during a job fair in the West Hollywood section of Los Angeles.  ((AP Photo/Marcio Jose Sanchez, File) / AP Newsroom)

That could mean the Fed's bond-buying program ends sooner than expected, potentially leading to a faster-than-expected interest rate hike. The central bank has been purchasing $120 billion in bonds each month throughout most of the pandemic in order to keep credit cheap and stabilize the financial markets. In November, Fed officials announced plans to scale back the program by $15 billion a month, a timeline that would end the program by late June.

Goldman Sachs economists expect the Fed to double the pace of tapering its bond purchases to $30 billion beginning in January, putting the central bank on track to wind down the program by mid-March.

"At this point, the economy is very strong, and inflationary pressures are high," Powell said Tuesday before the Senate Finance Committee. "It is therefore appropriate in my view to consider wrapping up the taper of our asset purchases, which we actually announced at our November meeting, perhaps a few months sooner."

The data comes before the emergence of the newly identified omicron variant of COVID-19, which poses a potential threat to the global economy's recovery.

There is still a lack of clarity over how dangerous the new variant is, including whether it is more transmissible or capable of causing more severe illness. Early evidence suggests an increased risk of reinfection. Public health officials have urged caution against panic.

But the economic impacts of the new strain – which has been found in at least 24 countries including the U.S. – were already being felt on Friday, with the U.S. and at least 10 European nations suspending air travel from southern Africa. The 27-nation European Union also recommended an "emergency brake" on travel from southern Africa, citing the "very concerning" new variant.