Tech Stocks Likely to Be in Focus Over the Weeks Ahead

Technology stocks have been the focus of active traders for many months now. Despite the markets being near all-time highs, active traders will likely keep an eye on the sector because the risk/reward setups at current levels suggest that prices will likely continue to head higher. In this article, we take a closer look at chart patterns of a popular exchange-traded fund (ETF) that is used by many for tracking the tech sector and two of its top holdings to determine how traders will look to position themselves over the weeks ahead.

Exchange-traded products such as the Technology Select Sector SPDR Fund (XLK) are popular among active traders for gaining exposure to targeted sectors such as tech. Fundamentally, this ETF comprises 76 holdings from across the U.S. tech sector and has approximately $39.4 billion under management. Looking at the chart below, you can see that the ascending trendline has provided support over the past 12 months, and traders will continue to look to this support level over the weeks ahead to plan where to place buy orders. From a risk-management perspective, stop-loss orders will likely be placed below $131.10 or $116.15, depending on risk tolerance and outlook. 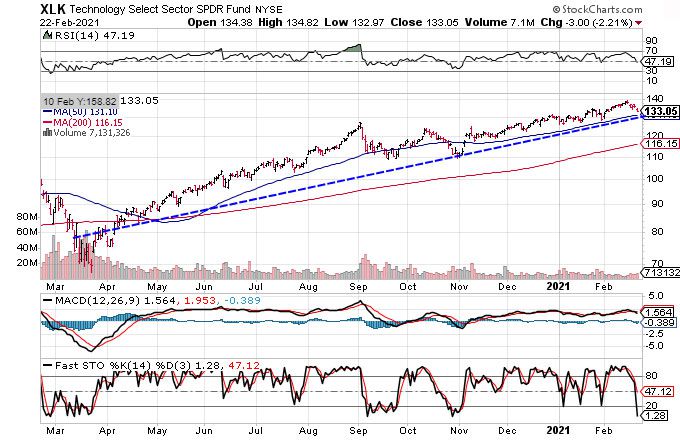 As one of the top chip makers in the world, NVIDIA Corporation (NVDA) is not a surprising find when it comes to identifying top holdings of the XLK ETF. Looking at the chart below, you will notice that NVIDIA stock has been trading within a period of consolidation since the late summer. Recent price action, which has sent the price of the stock above a key level of short-term resistance, suggests that the bulls are in control and that the next leg of the uptrend could just be getting underway. The retracement toward the new-found support will likely be used by trend traders as a buying opportunity in anticipation of a bounce. Stop-loss orders will most likely be placed below $480.78 in case of a sudden shift in market sentiment of underlying fundamentals. 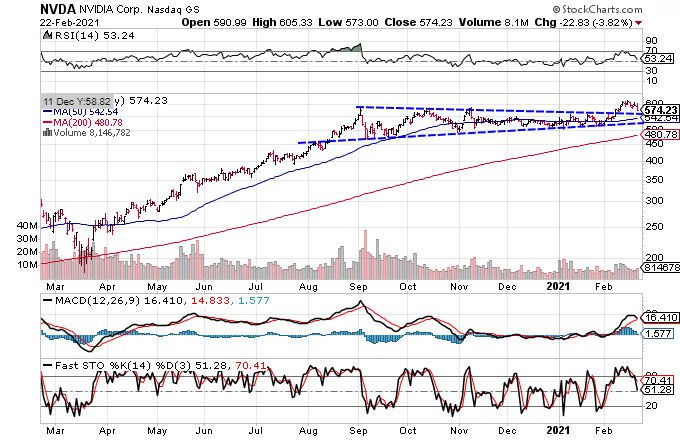 NVIDIA, already a major force in semiconductors, could become even more dominant and reshape the industry with its proposed $40 billion acquisition of U.K.-based semiconductor design firm Arm Ltd. announced in September. If the acquisition is approved, it would give a major boost to NVIDIA’s data center business, which has grown rapidly amid the pandemic.

With much attention being given to cryptocurrencies and digital payments in general, it is natural for traders to analyze the chart of PayPal Holdings, Inc. (PYPL). The proximity of the price to major levels of support, as shown below, is a common theme in many of the top holdings of the XLK ETF. In the case of PayPal, active traders will likely look to place buy orders near current levels in anticipation of a move higher because the combination of the 50-day moving average and two ascending trendlines should be strong enough to counter any bearish attempt to reverse the trend. Stop-loss orders will likely be placed below one of the dotted trendlines or the long-term moving averages, based on risk tolerance and outlook. 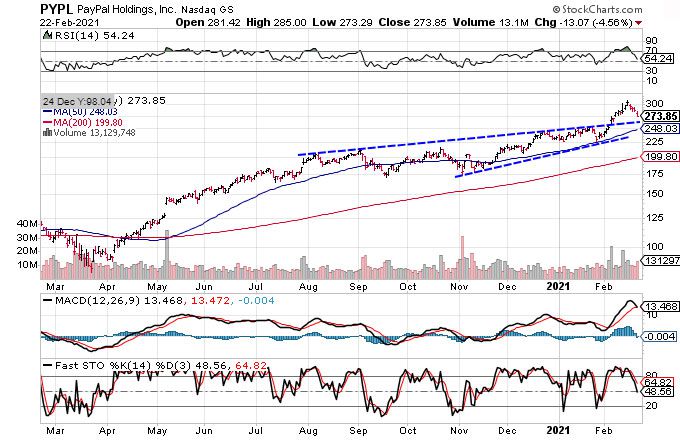 The tech sector has been the focus of many investors over the past year. Based on the charts discussed above, it appears as though this theme will likely continue over the weeks and months ahead. Nearby levels of support from ascending trendlines and long-term moving averages will likely be used when determining the placement of stop-loss orders so that the risk/reward remains in the favor of the bulls.

At the time of writing, Casey Murphy did not own a position in any of the assets mentioned.