ASX Limited chief executive Dominic Stevens has warned about the gamification of share trading following the GameStop frenzy, but says it is unlikely to occur in Australia.

Mr Stevens said the wild trading on GameStop shares may highlight the need for investors to understand differences in how low-cost brokers operated compared to more traditional brokers.

He said that low-cost brokers, which were bigger in the United States but played some role in Australia, were often structured in a way that meant the investor did not own the actual underlying stock, which created risks for investors.

“I think there’s also a question to be asked about the gamification of buying and selling shares,” he said.

“It’s almost like you’re buying and selling second to second, and it’s like as if you’re playing a video game,” he said.

However, he pointed to several factors that make a GameStop short squeeze – in which online traders last month used the online forum Reddit to trigger a surge in the price of the heavily-shorted stock – less likely in Australia. 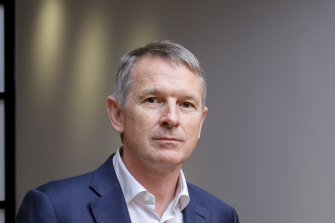 For one, he said the business model used by Robinhood, the no-commission broker used by many of the day traders, could not operate here. “The zero cost trading from Robinhood, that’s because Robinhood’s revenue model is to sell your order to a market maker. You can’t do that in Australia,” Mr Stevens said.

While more than 100 per cent of GameStop’s shares were sold “short,” meaning traders were betting the stock price would fall, Mr Stevens said this also could never happen in Australia. “They might get to 20 per cent,” he said.

In America’s market, he said there were also thousands of share options on smaller companies, but in Australia the number of listed options was only about 75, and they were all over top 100 stocks.

“So some of those conditions aren’t here, but it doesn’t mean we don’t think about it. We have been thinking about it as far as smaller stocks go because if you get a significant amount of volume into them, that could cause a market move in those stocks,” Mr Stevens said.

Mr Stevens made the remarks after ASX Limited delivered a 3.4 per cent fall in net profit after tax to $241.8 million, which it said was driven by lower interest earnings. It cut the interim dividend by 4¢ to 112.4 cents, which will be fully-franked and paid on March 24.

The stock exchange operator has also appointed a new chairman, with director Damian Roche to take over from Rick Holliday-Smith. Mr Holliday-Smith, who has been chairman since 2012, previously said this would be his final three-year term in 2018.

Mr Stevens acknowledged the November 16 outage in the ASX, saying it was a “difficult thing to swallow,” and it highlighted the need to work closely with its technology partners.