The country’s largest superannuation fund has warned double-digit investment returns will not last as government stimulus winds back and inflationary pressures are met with higher interest rates to curtail the strong economic bounce-back from COVID-19.

AustralianSuper has recorded the strongest yearly performance in its 15-year history, returning 20.43 per cent to members compared with 0.52 per cent last year, but chief investment officer Mark Delaney said such “dramatic” returns would not be repeated. 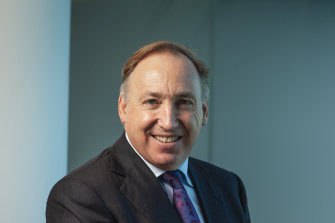 AustralianSuper CIO Mark Delaney says governments will pull the ‘handbrakes’ to slow growth in the next year or two.Credit:Eamon Gallagher

The bulk of the record performance for the financial year was driven by rocketing equities markets as investors priced in the economic recovery from COVID-19 and unemployment fell and confidence rose to pre-pandemic levels.

Mr Delaney said the market bounce back started with technology stocks and has now filtered through to almost every industry, including financials that recorded a 41 per cent rebound over the financial year.

“It’s been right across the board for the Aussie sharemarket,” he said. “Some of those stocks which had been left behind had large catch-up rallies.”

Mr Delaney predicted sharemarkets would remain stable over the next year, but warned returns would fall once “handbrakes” are pulled to avoid inflation as governments globally wind back stimulus and switch to contractionary settings.

“Interest rates are extraordinarily low and the central banks have been supportive,” Mr Delaney said. “As the economy lands back on its feet, that will no longer be required.

“As much as we’d all love 20 per cent to go into our super balance year after year, I think returns will be more modest next year as equity returns come back.”

Mr Delaney said the biggest investment opportunities will be companies and infrastructure projects that embrace the digital world which has become embedded through COVID-19.

In office work and shopping, Mr Delaney said “the hybrid model is here to stay” and he predicted the blend of bricks and mortar and online would extend to other industries such as health and education.

“This is a bit like the early days of electricity where it was first developed as something to light up cities, rather than going round and lighting gas lamps. Thirty years on, everything is powered by electricity.

“When we first saw digital disruption, it was perhaps the music industry. Then it went to the book industry, then it went to online shopping office, now it’s gone to office. It’s just rolling through all the sectors.”

The federal government forged ahead with the legislated rises of the superannuation guarantee this month, taking the compulsory payment up to 10 per cent of wages. More than one quarter of the country’s 20 largest listed companies, including ANZ, Macquarie Group and Telstra, said this would be deducted from take-home pay, as predicted by some economists.

Mr Delaney said superannuation should not be seen as payments additional to wages, labelling super instead as “saved wages”. He restated his support for the super guarantee rise, claiming now was “undoubtedly was the right time to increase the SG”.