Commonwealth Bank chief executive Matt Comyn says the Australian economy will not be impacted by the Russian invasion of Ukraine as the escalating conflict threatens to push inflation higher.

In delivering a speech for the Australia-Israel Chamber of Commerce in Melbourne on Tuesday, Mr Comyn acknowledged the conflict and paid respects to “anyone with ties to the region”. 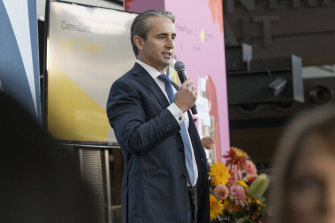 CBA chief Matt Comyn said the Ukraine crisis would have a “minimal impact” on the Australian economy.Credit:

“I want to mention the terrible situation currently unfolding on Ukraine and fear and suffering of those affected by war,” Mr Comyn said.

The Russian invasion has raised concerns around the world of the potential to further increase inflation and trigger an energy crisis if economies are cut off from Russia’s vast gas supplies, as punitive sanctions are imposed to hobble the Russian economy.

However, Mr Comyn said the geopolitical crisis, which has been described as the largest military conflict since WWII, would have a “minimal impact” on the Australian economy.

“It’s not a significant part of our trade relationships, more broadly and certainly within CBA,” Mr Comyn said. “It’s clearly a very concerning trend, the escalation in recent times. But I guess our overall sense for the economy is unchanged.”

More than $70 billion was wiped off the ASX last Thursday as the market reacted to the uncertainty caused by the conflict. However, Mr Comyn said the ongoing volatility was manageable.

“We’re navigating through, as you would expect, higher levels of volatility and intraday volatility which is, of course, reacting to escalating sense of different sanctions.”

Mr Comyn declined to weigh in on what more could be done by the international community to stop the war, but said the sanctions appeared to be working as intended.

“It’s been well reported [that] both the restrictions coming into the broader Russian financial system, to the banking system, through to the SWIFT payments network … as well as challenging some of Russia’s foreign reserves. Clearly, that has the impact that’s particularly been designed.”

The comments came as CBA sold down one of its last major investments in Asia, offloading a stake in the Chinese lender Bank of Hangzhou for $1.8 billion as it seeks to focus on Australia and New Zealand.

CBA on Tuesday said it had entered into a binding agreement to sell a 10 per cent stake in Bank of Hangzhou, and it would retain its remaining 5.57 per cent stake in the Chinese bank for at least another three years.

The sale represents one of the last key remaining steps in CBA’s gradual move to become more focused on domestic retail and commercial banking, a strategy that has also been adopted by its key rivals.

Mr Comyn used the speech in Melbourne to outline major shifts in the Australian economy – digitisation and decarbonisation – to make a pitch for CBA’s position as a leading small business banker.

“Businesses are very well-placed to embrace and benefit from Australia’s digital and decarbonisation transformation. That’s why we’re very focused on allocating capital to productive part of the economy … and directly helping businesses grow.”