ConsenSys CEO: Crypto is crossing the chasm into popular culture

New York (CNN Business)Bitcoin prices continued their rebound Saturday, rising about 6% to nearly $58,000. But the world’s largest cryptocurrency has been overshadowed lately by its younger sibling, Ethereum.

Ethereum, or ether for short, hit a new record high Saturday of just over $2,900. Ether prices have nearly quadrupled in 2021, soaring 290%. Bitcoin has had a great run too this year, doubling in value.
The total value of all Ethereum in circulation is now about $333 billion, according to CoinMarketCap. Bitcoin’s (XBT) market value is nearly $1.1 trillion.

While there are thousands of cryptocurrencies — including the Elon Musk tweet-fueled Dogecoin — Bitcoin and ether account for nearly two-thirds of the entire $2.2 trillion global crypto market.

Bitcoin has soared this year in part due to increased adoption from corporate America. Musk’s Tesla (TSLA) and software firm MicroStrategy (MSTR) have bought bitcoin to hold on their balance sheets. Digital payments giants Square (SQ) and PayPal (PYPL) are letting users buy, sell and hold crypto, too.

But Ethereum has enjoyed an even bigger surge than Bitcoin because it is the cryptocurrency of choice for the purchases of many non-fungible tokens, or NFTs — which have taken the art and broader collectibles world by storm. 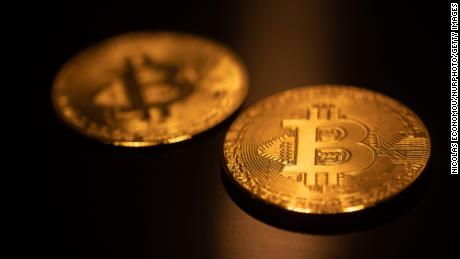 One NFT piece by digital artist Beeple sold for nearly $70 million at a Christie’s auction earlier this year. Baseball trading card company Topps has gotten into the NFT game by selling virtual cards and is now going public through a merger with a blank check special purpose acquisition company, or SPAC.

NFTs often offer fans of an artist, celebrity or athlete unique video and other digital content. Super Bowl champion Tom Brady now has his own NFT company.
And two players selected in this week’s NFL Draft, Heisman Trophy winner DeVonta Smith and defensive end Kwity Paye, also launched NFTs. A portion of sales from Smith’s NFTs will go to charity, he said. Paye has said that all of his NFT sales are going to a non-profit organization.
Source: Read Full Article