London (CNN Business)It’s difficult for American companies to operate in China. But the latest data on the country’s economy underscores why, for many firms, it’s still worth it. 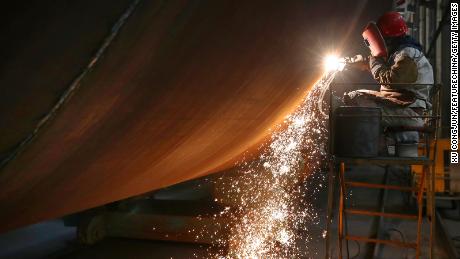 That rate of growth was significantly slower than the 18.3% year-on-year increase China registered in the first quarter. But that period was boosted by comparisons to the depths of the country’s Covid-19 lockdowns in 2020 — and no one expected growth of that magnitude to be maintained.

“All told, activity in China remained strong in [the second quarter],” Julian Evans-Pritchard, senior China economist at Capital Economics, said in a note to clients.

There are some signs of weakness. Retail sales growth slowed to 12.1% in June, down from 12.4% in May, according to the data released Thursday. That’s the slowest rate of growth this year.

“[The] data continues to indicate uneven recovery,” said Yue Su, principal economist for The Economist Intelligence Unit.
But broadly speaking, notching 7.9% growth as the recovery solidifies is noteworthy, and keeps China on track to easily surpass its annual growth target of more than 6%.
The stats are a reminder of why US companies and other multinational firms are determined to keep doing business in China despite unpredictable regulation, issues with market access and trouble protecting intellectual property.
In its earnings call earlier this month, Levi Strauss (LEVI) said that revenue in China during the second quarter was now 3% higher than the same period in 2019.
“As one of our largest growth opportunities, we remain focused on maintaining this momentum,” CEO Chip Bergh told analysts.
PepsiCo (PEP) CEO Ramon Laguarta praised the strength of the company’s China business on a call with analysts this week, pointing to the strong economic recovery following the Covid crisis.
Tensions between Washington and Beijing and human rights concerns have recently made doing business in China even harder for Western firms.
Remember: Earlier this year, companies including H&M, Nike (NKE), Adidas (ADDDF) and Burberry (BBRYF) faced boycotts because of stands they’d taken in the past against the alleged use of forced labor to produce cotton in China’s western region of Xinjiang.
But for many, China is simply too big an opportunity to miss out on, given the size of its consumer base and its continued pace of growth.

US airlines just reported another round of quarterly losses. It could very well be their last.
The latest: Delta Air Lines (DAL) announced Wednesday that it was profitable in June and expects to be in the black for the rest of this year, my CNN Business colleague Chris Isidore reports. United (UAL) expects to be profitable starting this month, and is moving ahead with expansion plans with its biggest jet order in its history.
“The momentum is continuing as we exited June with a demand environment that’s accelerating,” Delta CEO Ed Bastian told analysts this week.
That doesn’t mean the industry’s problems are over yet. Delta reported that despite its successful June, revenue for the quarter was about half of where it was during the same period in 2019.
And while leisure travel is actually up from pre-pandemic levels, higher-paying business passengers remain scarce. Delta said that domestic business travel in June was about 40% of where it stood two years earlier. International travel is also still muted.
Executives are optimistic these kinds of trips will pick up after Labor Day, but the pace of the recovery remains an open question.
Investor insight: Despite the optimism, airline stocks are still lagging. Delta shares are up 1% this year, compared to 16.5% for the S&P 500. United’s stock is up 11%.
But analysts are bullish. Of 140 ratings for the eight largest US airline stocks, more than half are “buy” or “strong buy” recommendations. In only 18 cases are analysts urging investors to sell.

The European Central Bank is moving ahead with efforts to create a digital version of the euro as the use of cash declines and China ramps up tests of its own e-yuan.
The central bank announced a two-year investigation on Wednesday that will examine “key issues regarding design and distribution” of a digital euro and analyze the potential market impact. A final decision on whether to roll out a digital euro would come later.
Details, details: A digital euro wouldn’t replace cash, but would function in much the same way. Instead of paying for goods or services with banknotes, Europeans could use an electronic form of money issued by the European Central Bank or national central banks to a digital wallet.
The announcement puts Europe on track to potentially roll out a digital currency in 2026. It’s an ambitious timeline, but the ECB is clearly concerned about the consequences of waiting too long to act.
In a speech last month, François Villeroy de Galhau, the governor of France’s central bank, said central bank money could become sidelined as the use of cash declines and new digital coins and tokens emerge. Europe started looking into a digital euro more seriously after Facebook unveiled plans to create a digital currency in 2019.
Villeroy also emphasized China’s progress in launching a digital yuan, which is already available in a number of Chinese cities.
“The risk is clearly that Europe will lose momentum not just in its drive to strengthen the international role of the euro, but even in preserving it,” he said. “The challenge here is also a geopolitical concern.”