Home » Markets » His risky bet made him a millionaire on paper. It could've gone very differently

His risky bet made him a millionaire on paper. It could've gone very differently

New York (CNN Business)Hedge funds, investment bankers and other institutional investors are desperate to find the next GameStop — before it’s too late.

That’s why Thinknum Alternative Data quickly built and launched a tool that provides its hedge fund and investment bank clients a ranking of the most-mentioned stocks on WallStreetBets as well as the Stocks subreddit. 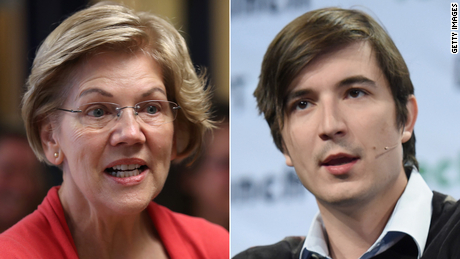 The tool gives sophisticated investors a way to avoid getting their short positions blown up — and the option to bet in tandem with retail investors.

“The inbound inquiries from people asking about the dataset has been insane. I’ve never seen anything like it,” Justin Zhen, Thinknum’s co-founder and president, told CNN Business.
Thinknum’s new offering shows how quickly Wall Street is adapting to this new phenomenon — ensuring it maintains control, even as traders on Reddit believe they’ve gained the upper hand on the establishment.

Some hedge funds that bet against GameStop (GME), AMC (AMC) and other stocks have been crushed by the Reddit-fueled rally. Those gains caused a massive short squeeze, where a stock climbed sharply, forcing those who bet against it to buy the stock back to avoid even greater losses.
“Everyone is saying, ‘I need to track Reddit.’ It’s become one of the most important drivers of market movement,” Zhen said.
As of Tuesday evening, the top mentioned stocks on Thinknum were GameStop, AMC and BlackBerry (BB). 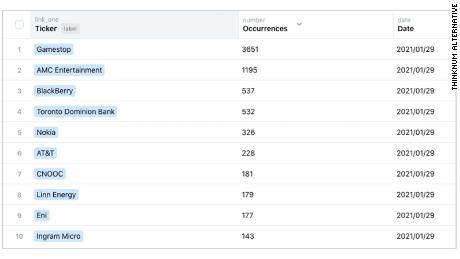 Thinknum is hardly the only Wall Street firm that has developed new ways to keep an eye on what retail investors and the WallStreetBets crowd are up to.
For instance, Nomura and Wolfe Research recently launched the Wolfe Retail Red Alert basket. According to Nomura, the tool analyzes Fidelity, Reddit and other sources of retail trading flows to monitor mentions and trading activity and measure that information against statistics on how heavily shorted stocks are.

Founded in 2014, Thinknum lets users comb through 30 different datasets to make investment decisions, everything from vehicle inventory posted by CarMax (KMX) and job postings to government contracts.
The platform has more than 130 hedge funds as clients as well as eight of the top 10 biggest banks, according to Zhen. Thinknum’s pricing starts at $16,800 per seat per year and goes up from there based on how much data is consumed. Some clients pay six-figures per year for access to the platform. 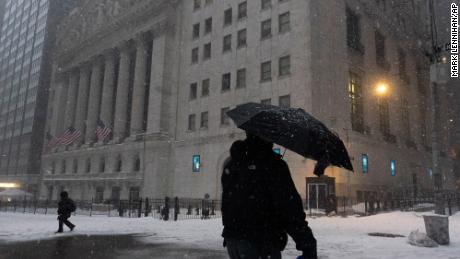 The Thinknum president said hedge funds especially need to know if their short bets are being discussed on WallStreetBets, indicating a potential short squeeze in the works.
“If you don’t know, then bad things can happen — as you’ve seen recently,” Zhen said.
GameStop short-seller Melvin Capital lost 53% in January and required a $2.75 billion bailout from larger hedge funds. The carnage spilled over into the broader markets last week, helping to drive the S&P 500 to its worst week since October.
The opposite is happening this week, with GameStop crashing and the broader markets rebounding sharply.

Of course, one risk with making investment decisions solely based on what is being mentioned on Reddit is that there is no way to confirm that the stocks being touted are actually being bought. Some WallStreetBets users claimed this week that hedge funds co-opted their movement by suggesting they were behind a surge in silver prices.
Rather than ascribing intention, Zhen said the tool is used to merely track how many mentions a stock gets on Reddit.
“You don’t have to know who they are and whether they like the stock or not. The main thing is knowing that people are talking about the stock,” the Thinknum president said.

Zhen added that demand was so strong for this tool that Thinknum created it in just days last week.
“I don’t have to pitch it to clients,” he said. “It pitches itself.”
Source: Read Full Article