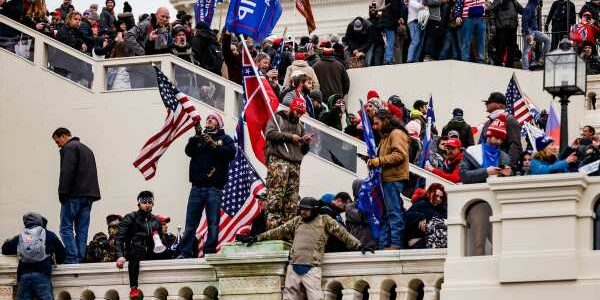 Dinakar Singh had financial news on mute inside his Midtown Manhattan home office when his son called out to him: “Dad, are you watching this?”

The Axon Capital founder, a former top trader at Goldman Sachs Group Inc., switched the television channel and turned up the volume. His mouth fell open.

“I came here as an immigrant at the age of 10,” he said later. “The U.S. was the only true great country on Earth, and the only place where one could come with nothing, and dream every dream.” Singh, who can see Trump Tower from the office in his apartment, wondered if what he was seeing could possibly represent that same country.

Across Wall Street, executives watched in horror from home desks and mostly empty offices as a mob of President Donald Trump’s supporters ransacked the U.S. Capitol on Wednesday. Then something changed. The market, inured to years of political chaos, mostly shrugged off one of the most brazen attacks ever on American democracy. By Thursday, much of the financial world was practically back to business as usual.

Former Obama White House Chief of Staff Bill Daley, now at Wells Fargo & Co., said the scene at the Capitol was terrifying — but more of an “individual sort of horror” than the type of crisis that prompts companies to take emergency action. “There was nothing about the event that caused us to pull the operating committee together to respond,” said Daley, the public affairs vice chairman for the banking industry’s largest employer. “The markets weren’t reacting at all.”

Stocks eventually rallied toward another record, as investors turned their attention from images of a Confederate flag marched through the Capitol and handguns drawn inside the House to the prospect of more stimulus under President-elect Joe Biden. Banks rose as Goldman Sachs said the industry has “moved back into vogue.”

“The only thing that was interesting about yesterday’s market was its disinterest,” said James Pillow, a portfolio manager at Moors & Cabot.

Even if the events didn’t leave a lasting mark on markets, it seized enough attention to overshadow the minutes from the Federal Reserve’s last rate-setting meeting.

“I was so distracted that I forgot they were even released until 20 minutes later,” said John Doyle at Tempus Inc. “Perhaps I should feel lucky that market moves were muted.”

Bob Diamond was signing in for blood work for his annual exam at Minnesota’s Mayo Clinic when he got a text about the riots. The former Barclays Plc boss, who now runs Atlas Merchant Capital, felt “shaken that it could have come to what it came to.” He went to bed around 9 p.m. and woke up feeling “tremendous confidence.”

Not all financial executives were feeling certain on Thursday.

Several people of color in the industry said the market’s sanguine reaction was another reflection of Wall Streeters’ financial security and lack of diversity. As disturbing as the events in Washington were, it caused relatively few executives to consider their own personal safety or place in society.

“It was my worst day as an American and an even worse day as a Black American,” said Jacob Walthour Jr., who runs Blueprint Capital Advisors. “If these protesters had been Black, this would be considered a coup or rebellion, and the show of force would have been unlike anything we have ever seen in this nation’s history.”

Some found themselves offering consolation. George Walker, who runs Neuberger Berman Group LLC and is former President George W. Bush’s second cousin, got a call from an industrialist in Germany who wanted to know why the images from Washington were so ugly. Then he heard from his mother in Montana, who was crying.

Erika Karp, founder of Cornerstone Capital Group, said she hoped the U.S. will learn from what happened: “The optimism would have to come from a place that says this was a lesson.”

— With assistance by Lananh Nguyen, and Sonali Basak