Investors are betting insurance companies will cut their provisions for payouts to businesses that suffered losses due to pandemic lockdowns, after a long-running battle in the courts reached a milestone.

The High Court on Friday declined to hear a further appeal in a long and complex dispute over “business interruption” cover, and whether insurers are liable for losses associated with pandemic lockdowns. 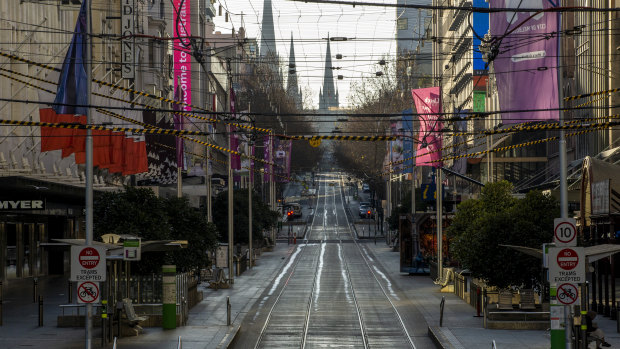 Bourke Street in Melbourne during a lockdown in 2020. The government restrictions led to a legal fight over business interruption insurance.Credit:Wayne Taylor

The insurance companies say the business interruption policies never intended to cover against pandemics, but the businesses had a win last year because insurers named the wrong federal legislation in policy documents. It is expected some customers will have valid claims.

Friday’s decision provides greater clarity to the market, because it means most of the appeals have now reached the end of the road, and a previous Federal Court ruling from February will stand.

Jarden analyst Kieran Chidgey said the net effect of Friday’s decision was positive for insurance companies, as there were likely to be fewer viable claims than expected.

“One would expect this would lead to a reduction in business interruption related reserve provisions,” Chidgey said. “There will still be valid claims and significant uncertainty around this, and potential for class actions.”

On a positive day for the market, insurance share prices outperformed. Suncorp shares jumped 5.4 per to $10.77, while QBE shares gained 5 per cent to $12.23.

The chief executive of the Insurance Council of Australia, Andrew Hall, said there would now be greater clarity for the industry and customers in assessing claims.

“Today’s decision by the High Court marks a significant milestone in a process that at its heart has been about understanding the extent to which business interruption insurance provides cover under the unprecedented conditions we experienced over the last two-and-a-half years,” Hall said

John Berrill, principal at law firm Berrill and Watson, who is representing business customers, estimated between a quarter and half of firms with business interruption cover could have viable claims.

However, Berrill said many companies had been dissuaded from putting in claims by insurance companies, and in the small number of cases where insurers were assessing how much to pay out they were “taking every point they can”.

“There are thousands of businesses that have still got viable claims, and the problem is that very few of them have actually made claims,” said Berrill, who is also involved with class actions against QBE and Lloyds over business interruption cover.