New York (CNN Business)The NCAA basketball tournament, aka March Madness, is nirvana for sports bettors. But it’s March Madness on Wall Street too, as the blue-chip S&P 500 index is wagering that legal gambling is a growing trend that’s here to stay.

Casino companies Penn National Gaming (PENN), which has a big stake in Dave Portnoy’s Bartsool Sports, and Caesars Entertainment (CZR), which is in the process of buying UK-based sports betting giant William Hill, entered the S&P 500 Monday. They join rival S&P 500 members MGM Resorts (MGM), Wynn Resorts (WYNN) and Las Vegas Sands (LVS) (soon to be just Sands).
In a sign of how the US economy is changing, one of the firms getting booted from the S&P 500 to make room for the casino companies is the once-mighty Xerox (XRX).

Las Vegas — like the rest of the United States — has been hit by a travel slowdown during the past year as a result of Covid-19. But many casino companies have opened up online sportsbooks following a Supreme Court ruling in 2018 that let states legalize sports gambling.

More than two dozen states (plus Washington, DC) have legalized betting on sports. That is one reason why the casino stocks have hit the jackpot during the past year, despite the fact that the roulette, blackjack and craps tables have been relatively empty.

Traders are betting on a major travel rebound as more states and cities start to reopen — and on continued strong demand from sports fans placing bets on their phones through apps like ‎Barstool Sportsbook & Casino. 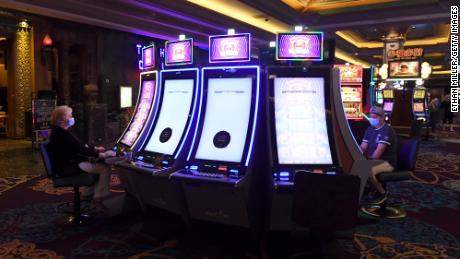 Shares of Penn National, which in addition to its 36% stake in Bartsool owns nearly four dozen casinos and racetracks in Louisiana, Mississippi, Missouri, Nevada and several other states, have skyrocketed more than 1,300% in just the past year.
Caesars stock has soared nearly 1,000% since mid-March 2020 as well. The other big casino stocks have been big winners too, with MGM and Wynn both more than doubling in the past 12 months.
MGM in particular has stepped up its sports gambling operations over the past few months. The company runs the BetMGM online sportsbook and also has a big ally in Barry Diller. The media and e-commerce mogul’s IAC (IAC) firm bought a $1 billion stake in MGM last year.
Investors have also been flocking to the pure play online sports betting companies that have thrived in the past year as gamblers bet legally on football, basketball, baseball and other professional and college team sports.

DraftKings is up more than 300% since it began trading last April as a result of a merger with a blank check special purpose acquisition company, or SPAC. UK-based Flutter Entertainment (PDYPF), which owns top DraftKings rival FanDuel, has gained about 200%.
The sports gambling market is getting increasingly crowded, but there appears to be more than enough demand to support multiple players. Investment research firm Morningstar said in a report last fall that it estimates the amount of legal bets on sports will reach $81 billion by 2024.
Source: Read Full Article