Here is a reality check. Despite the Commonwealth Bank’s millennial-milking marketing blitz around e-commerce, digital ecosystems and the lure of cryptocurrency-trading, it’s still primarily a big mortgage processing factory – or, as some colloquially call it, the largest of the big four building societies.

The slump in its share price that followed its quarterly earnings update on Wednesday is testament to that. 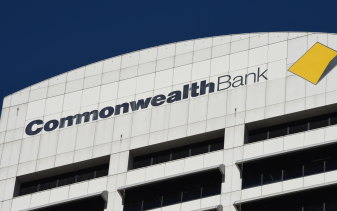 Home loans and, to a lesser extent, business banking are still the main game at CBA.Credit:Peter Braig

That is not to say that CBA’s digital product push isn’t vitally necessary to protect its future. Quite the opposite.

But traditional forces are at play in how the bank’s profit looks today.

The cash profit for the three months to September was 9 per cent below the average of the two previous quarters. Competition in the mortgage market is intense and there is pressure on net interest margins, which it said were ‘considerably lower’.

If one looks through the noise around results, there are historically three core drivers of bank earnings – market share, interest rate margins and costs.

The almost 8 per cent immediate fall in the share price was an accident waiting to happen.

CBA is clearly well ahead of the field when it comes to market share gains in the consumer and business bank divisions. It posted record growth of $10.1 billion in home lending against the same period last year, and it continued to grow its share of business lending during the quarter.

But the increased competition and lower interest rates are the sting in the tail. It is a story we have already heard from the other big three to varying degrees, and CBA boss Matt Comyn had previously cautioned the market.

But it seems his warning was partially ignored by investors, who have priced CBA at a significant premium to its large peers. And so, for the market, the earnings came in below expectations.

In that regard, the almost 8 per cent immediate fall in the share price was an accident waiting to happen.

Increased competition is part of the problem, but then so is the big customer switch from variable interest rate home loans to ultra-low fixed rates.

Meanwhile, costs were a mixed bag. The overall decline of 1 per cent was driven by lower remediation charges – enough to offset a 3 per cent rise in other expenses such as staff costs, but an outcome that was below the expectations of analysts.

The bottom line is that the mortgage book and, to a lesser extent, the business bank are the main game at CBA.

The investments in capturing younger customers is a longer-term proposition that will take time to bear fruit. They are the tail, but they are not wagging the dog.

That said, CBA’s move into the buy-now-pay-later sector, and its recent launch of its Cheddar app are initiatives that spearhead the bank’s encroachment into territories that have been the domain of the fintech sector. 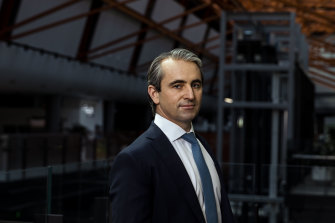 Matt and the Millennials – it’s an investment into the future.Credit:Dominic Lorrimer

The move to trial an app that allows customers to trade a bunch of cryptocurrencies is a little more off-script, but stays with the theme of attracting millennial customers.

This particular suite of products is notably similar to those boasted by Jack Dorsey’s Square – particularly once its acquisition of Afterpay has gone through the takeover gate.

For its part, Afterpay has an equally-sized aspiration to get into the traditional market space dominated by the banks. It has already teamed up with Westpac to offer white-label transactional banking and savings products, and has its eye on the mortgage prize as well – albeit later down the track.

While there is plenty of aping between CBA and some fintech rivals, there is no significant competitive overlap in either direction – yet. But there is a clear and present danger for traditional banks, and Comyn is creating the bank’s own insurance against it.

At this point, Afterpay’s core business is about growing customers while managing responsible spending. Conversely, CBA has to manage its risk around responsible lending.

CBA has the technology infrastructure to keep adding services to its platform business and keep testing the waters with products that will appeal to an emerging generation of customers who are just as comfortable to have non-banks supply their financial needs.

CBA’s Australian bank rivals haven’t been flat-footed, and they understand the customer shifts and the new landscape. But their reaction has not been as swift or as noisy.

That said, CBA has a clear head start.