Whether casinos should continue to allow smoking is a contentious issue in numerous states, particularly New Jersey, where the governor and more than half the state Legislature supports a bill to ban indoor smoking in gambling halls.

A now-cancelled discussion between a casino executive and smoking foes was shaping up to be a highlight of a major gambling conference later this month in Atlantic City, and would've been the first detailed public airing of the issue.

But the casino executive, Resorts Casino President Mark Giannantonio — who has since become head of the Atlantic City casinos’ trade association, which vehemently opposes a smoking ban — pulled out of the session.

It's the latest indication of how thorny this dispute has become, and how difficult it will be to find a resolution that will satisfy everyone.

Hundreds of Atlantic City's casino workers have been pushing for two years for an indoor smoking ban, saying secondhand smoke harms their health and that of casino customers. They note that casinos are the only exception to New Jersey’s clean air law, which bans smoking from other indoor workplaces. The casinos, however, predict that smoking customers will abandon the casinos if there's a ban, causing lost jobs and plunging revenue as casinos still struggle to return to pre-pandemic performance levels.

A bill that would end smoking in Atlantic City’s nine casinos is pending in the state Legislature, where it enjoys broad bipartisan support, but has remained stalled. No vote has yet been scheduled on it. An identical bill died in last year’s session, even though Democrat Gov. Phil Murphy has said he will sign it if it passes. 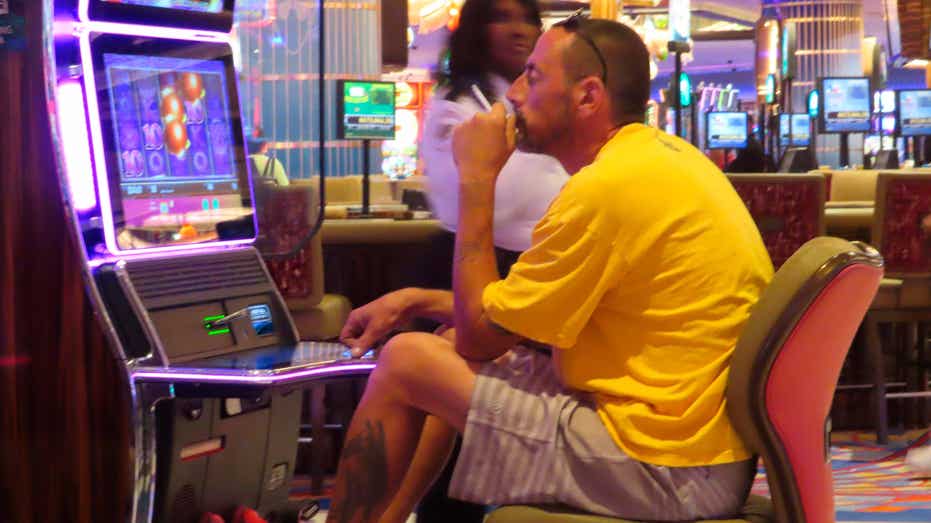 A man is seen smoking a cigarette on the gambling floor of the Hard Rock casino in Atlantic City, N.J., on Aug. 8, 2022, as a debate about whether smoking should be allowed in Atlantic City casinos rages on. (AP Photo/Wayne Parry / AP Images)

"The Casino Association of New Jersey has been very transparent in its position that an immediate smoking ban would have a significant adverse effect on Atlantic City," he said. "We believe that more time is needed to devise and implement a solution that will address the concerns of our employees without jeopardizing jobs and benefits to seniors."

Cancellation of the Atlantic City smoking discussion means that two of the industry’s biggest annual gatherings — the East Coast Gaming Congress and the Global Gaming Expo, which is due to take place next month in Las Vegas — will both lack any discussion on ending indoor smoking. That's despite moves in numerous states including New Jersey, Rhode Island, Pennsylvania and others to implement casino smoking bans.

Michael Pollock, managing director of Spectrum Gaming Group, which helped organize the East Coast Gaming Congress, said the group tried to find a replacement from the casino industry after Giannantonio withdrew from the panel, but was unable to secure one on short notice.

Organizers of the conference issued a revised schedule on Friday that did not include the planned session on casino smoking.

Aside from Giannantonio, other panelists were to have been Cynthia Hallett, president and CEO of Americans for Nonsmokers’ Rights Foundation, and Eric Hausler, CEO of Greenwood Racing which owns the Park Casino in Pennsylvania, where smoking is banned.

"It’s remarkably telling that Atlantic City casinos couldn’t find one person to publicly defend their position in favor of indoor smoking," Hallett said. "They know that they cannot win on the facts — even their economic arguments have been thoroughly rebutted — so they are avoiding a public discussion.

"We are disappointed that this conversation will be missing from the formal conference program, but rest assured: The presence of casino workers who have been fighting for their health will be felt next week," she said.