Home » Markets » Powell and Yellen acknowledge valuations may be high, but aren't worried about stability 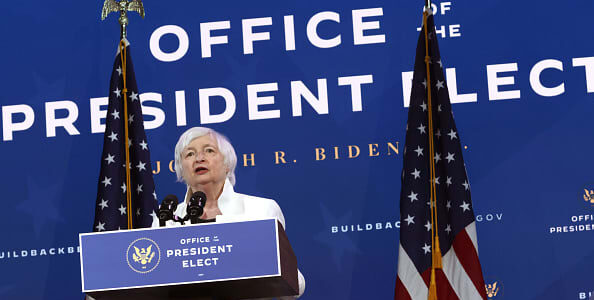 Powell and Yellen acknowledge valuations may be high, but aren't worried about stability

Treasury Secretary Janet Yellen and Federal Reserve Chairman Jerome Powell on Tuesday agreed that higher elevated asset valuations in pockets of the markets are not yet reason for alarm.

Speaking before the before the House Financial Services Committee, both said they are confident in the stability of the financial sector as the U.S. economy recovers from the Covid-19 pandemic.

But Rep. Jim Himes, D-Conn., asked the pair if they are at all worried about eventual market turmoil when trillion-dollar fiscal stimulus efforts fade and the Fed begins to curb its easy monetary policy.

"I'd say that while asset valuations are elevated by historical metrics, there's also belief that with vaccinations proceeding at a rapid pace, that the economy will be able to get back on track," she said.

"I think that in an environment where asset prices are high, that what's important is for regulators to make sure that the financial sector is resilient and to make sure that markets work well," said Yellen, "and that financial institutions are appropriately managing their risks."

Yellen, 74, spoke at length about the successful passage of President Joe Biden's $1.9 trillion Covid-19 relief package, known as the American Rescue Plan, and the administration's efforts to continue to pursue stimulus in the months ahead.

The Treasury secretary, who was a strong advocate of the big-ticket coronavirus relief bill, said the legislation will quickly deploy funds to millions of Americans struggling to pay rent, buy groceries and meet other living expenses as workers try to reenter the labor market following the 2020 recession.

Though she steered clear of going into details about the Biden administration's tax plans, Yellen did acknowledge that she expects the White House to eventually propose ways to generate revenue to pay for pricey agenda items, including a forthcoming infrastructure plan.

To date, federal lawmakers have authorized $6 trillion in tax cuts, loans, grants, and subsidies in the wake of the coronavirus pandemic and economic crisis, according to the Committee for a Responsible Federal Budget, a fiscal watchdog group.

Himes remarked that the current torrent of liquidity encouraged by fiscal and monetary policy appears to have led to some frothy asset valuations in the market. He quipped that "everybody and their brother has a SPAC," a joke about how easy it seems for investors to band together to take private companies public via a special purpose acquisition company.

While Fed chief Powell, 68, conceded that some parts of the market look rich, he said the nation's largest banks remain flush for cash and look otherwise healthy.

"We look carefully at financial stability on an ongoing basis, we have a framework with four pillars," Powell added. "If you look at those, the evidence is kind of mixed. You can say that some asset prices are a bit high, but the bank system is highly capitalized."

Wall Street has grown increasingly concerned that the Fed will soon begin to signal that it will slow, or "taper," its purchases of U.S. Treasurys and mortgage-backed securities. That buying, which each month sums to billions of dollars' worth of bonds, is used by the Fed to stimulate the U.S. economy by keeping the financial system flush with cash.

The Fed's balance sheet, which had decreased to under $4 trillion as recently as summer 2019, has ballooned to nearly $7.7 trillion, according to the central bank's website.

With the U.S. economy showing signs of recovery in the form of improving jobs data, expectations for sharp gross domestic product growth and forecasts for burgeoning inflation, investors say the Fed's ability to broadcast and only gradually make changes to asset purchases will be critical.

"In terms of moving forward, we've said that we would start to taper our asset purchases when we've seen substantial further progress toward our goals" of full employment and inflation close to the Fed's 2% target, Powell said. "When that comes, we'll communicate well in advance of the time of actually tapering."