The Archdiocese of New York says that its bishop does not have the authority or power to review statements made by a Jesuit priest in the state about “gender-affirming” treatment for children, which appear to contradict Pope Francis’ stated position on transgender issues.

The Archdiocese of New York, one of the most prominent and public-facing Roman Catholic dioceses in the U.S., says that Jesuit priest Fr. James Martin is outside its jurisdiction. Martin, who is based out of New York, is a member of the international Society of Jesus, often referred to as the “Jesuits.”

Martin is also an editor-at-large for Jesuit publication America Magazine. The priest is a frequent user of Twitter, where he has over 305,000 followers. He raised eyebrows in 2020 by leading the opening prayer at the Democratic National Convention, despite the party’s position in favor of abortion.

Martin posted a response to Texas Attorney General Ken Paxton on Tuesday, in which he appeared to challenge Paxton’s statement that “sex-change operations and puberty blockers prescribed to kids is ‘child abuse’ under Texas law.”

Paxton added, “These procedures are monstrous and tragic. “I’ll do everything I can to protect against those who take advantage of and harm young Texans.”

In response, Martin highlighted a letter from the Texas Pediatric Society that voiced support for “gender affirming care.”

“We know that when children and adolescents are provided with appropriate gender affirming care, including puberty suppressors, the risk of lifetime suicidal ideation falls dramatically,” the letter from the Texas Pediatric Society states. Puberty blockers are a form of hormone therapy that permanently suppress development of children.

Puberty blockers can irreversibly affect both primary and secondary sex characteristics of human beings, including genitalia, breasts, facial hair, menstruation and fertility in both sexes, according to the Mayo Clinic. If the puberty blockers are discontinued quickly enough, children can resume their natural pubescent development.

“Father Martin is a Jesuit priest, and is therefore answerable to his Jesuit superiors, not to the Archdiocese of New York,” archdiocese spokesman Joseph Zwelling told Fox News. “Any comment on his statements should come from them, not from this archdiocese.”

Cardinal Timothy Dolan is the prelate and diocesan archbishop of the Archdiocese of New York, as well as a cardinal appointed by Pope Emeritus Benedict XVI. 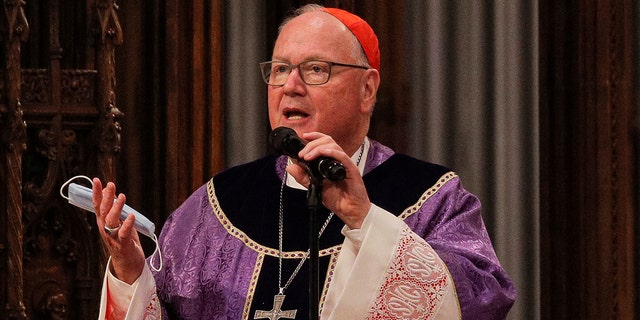 According to canon law, “By creating the human being man and woman, God gives personal dignity equally to the one and the other. Each of them, man and woman, should acknowledge and accept his sexual identity.”

Canon law is the legal system used in the governance of the Catholic Church around the world. It is a fully developed form of law with its own courts, lawyers and judges.

“Everyone, man and woman, should acknowledge and accept his sexual identity. Physical, moral, and spiritual difference and complementarity are oriented toward the goods of marriage and the flourishing of family life. The harmony of the couple and of society depends in part on the way in which the complementarity, needs, and mutual support between the sexes are lived out,” according to the laws of the Catholic Church.

The comprehensive list of regulations and laws in the canon legal system are outlined in the Catechism of the Catholic Church.

“In exercising the function of a pastor, a diocesan bishop is to show himself concerned for all the Christian faithful entrusted to his care, of whatever age, condition, or nationality they are, whether living in the territory or staying there temporarily; he is also to extend an apostolic spirit to those who are not able to make sufficient use of ordinary pastoral care because of the condition of their life and to those who no longer practice their religion,” the Catechism states.

Pope Francis has condemned gender ideology and transgenderism as a disordered attempt to defy “the order of creation.”

“The family is threatened by growing efforts on the part of some to redefine the very institution of marriage, by relativism, by the culture of the ephemeral, by a lack of openness to life,” Pope Francis said as early as 2015.

“Let’s think of the nuclear arms, of the possibility to annihilate in a few instants a very high number of human beings,” the pontiff said in the same year. “Let’s think also of genetic manipulation, of the manipulation of life, or of the gender theory, that does not recognize the order of creation.”

Bishops are able to suspend the faculties of any clergy operating within their jurisdiction, short of the pope himself.

When pressed for explanation of why the cardinal claims he is unable to exercise authority over Jesuit priests based in his archdiocese, the archdiocesan office declined to respond.

Fr. Martin and the Jesuits East — the province of the Society of Jesus that Martin belongs to — did not respond to Fox News’ requests for comment.