Ordinary Russians faced the prospect of higher prices and crimped foreign travel as Western sanctions over the invasion of Ukraine sent the rouble plummeting, leading uneasy depositors to line up at banks and ATMs in a country that has seen more than one currency disaster in the post-Soviet era.

The Russian currency plunged about 30 per cent against the US dollar after Western nations announced unprecedented moves to block some Russian banks from the SWIFT international payment system and to restrict Russia’s use of its massive foreign currency reserves. The exchange rate later recovered ground after swift action by Russia’s central bank. 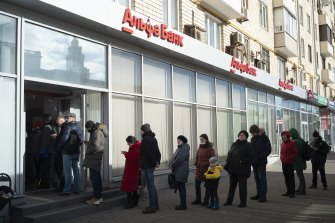 Russians queue to withdraw money in Moscow after the West announced fresh sanctions.Credit:AP

But the economic squeeze got tighter when the US fleshed out the sanctions to immobilise any assets of the Russian central bank in the United States or held by Americans. The Biden administration estimated that the move could impact “hundreds of billions of dollars” of Russian funding.

US officials said Germany, France, the United Kingdom, Italy, Japan, European Union and others will join in targeting the Russian central bank.

“We are in uncharted territory of throwing all these nuclear options of sanctions at Russia at the same time over the weekend,” said Elina Ribakova, deputy chief economist at the Institute of International Finance, a banking trade group. “Throwing them all together at once like this will have a very significant effect.”

Russians wary that sanctions would deal a crippling blow to the economy have been flocking to banks and ATMs for days, with reports on social media of long lines and machines running out. People in some central European countries also rushed to pull money from subsidiaries of Russia’s state-owned Sberbank after the Russian parent bank was hit with international sanctions.

“It’s going to ripple through their economy really fast, Anything that is imported is going to see the local cost in currency surge. The only way to stop it will be heavy subsidisation.”

Entrepreneur Vladimir Vyaselov found that flights were blocked for his overseas trip on a student visa. He was considering driving to another country and flying from there.

“I have been in disagreement with the decisions of all the authorities for a very long time and that is why I store all my money only in currencies, and I am sceptical towards Sberbank, VTB, to national banks in general,” he said. “I can’t say I was ready (for sanctions) but I was as ready as possible being a citizen of the Russian Federation.”

A sharp devaluation of the rouble would mean a drop in the standard of living for the average Russian, economists and analysts said. Russians are still reliant on a multitude of imported goods, and the prices for those items are likely to skyrocket, such as iPhones and PlayStations. Foreign travel would become more expensive as their roubles buy less currency abroad. And deeper economic turmoil will come in the coming weeks if price shocks and supply chain issues cause Russian factories to shut down due to lower demand.

“It’s going to ripple through their economy really fast,” said David Feldman, an economics professor at William & Mary in Virginia. “Anything that is imported is going to see the local cost in currency surge. The only way to stop it will be heavy subsidisation.”

Russia has moved to produce many goods domestically, including most of its food, to shield the economy from sanctions, said Tyler Kustra, an assistant professor of politics and international relations at the University of Nottingham. He expected some fruits, for example, that can’t be grown in Russia “are going to be suddenly much more expensive.”

Electronics will be a pain point, with computers and cellphones needing to be imported and the cost going up, said Kustra, who studies economic sanctions. Even foreign services like Netflix might cost more, though such a company could lower its prices.

The auto sector, a major employer, “are being hit very quickly with the ban on the import of microchips and other parts, said Chris Weafer, chief executive of Macro-Advisory, a Eurasia strategic advisory company. 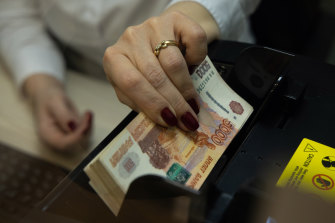 The value of the Russian rouble has tumbled and more pain could be in store.Credit:Bloomberg

As long as even a few Russian banks were spared from the SWIFT cutoff, he said, Russia would still be able to keep exporting, show modest growth this year and earn enough to subsidise or bail out big companies or employers.

“So it really does critically depend on whether SWIFT remains open or whether that last channel is closed,” Weafer said.

After the West sanctioned Russia for seizing Ukraine’s Crimea peninsula in 2014, Russia’s central bank cleaned up weak banks and prepared for a possible worsening of penalties.

“So there’s not need to fear any kind of immediate crisis or collapse” this year, he said. “It’s clearly only if these sanctions get tighter and extend over several years, the situation would clearly deteriorate over that period.”

The rouble slide conjured ugly memories of previous crises. The currency lost much of its value in the early 1990s after the end of the Soviet Union, with inflation and loss of value leading the government to lop three zeros off rouble notes in 1997. Then came a further drop after a 1998 financial crisis in which many depositors lost savings and yet another plunge in 2014 due to falling oil prices and Crimea sanctions.

On Monday, Russia’s central bank sharply raised its key interest rate to 20 per cent from 9.5 per cent in a desperate attempt to shore up the rouble and prevent a run on banks. It also said the Moscow stock exchange would remain closed.

European officials said at least half of Russia’s estimated $US640 billion ($883 billion) hard currency pile, some of which is held outside Russia, would be paralysed. That dramatically raised pressure on the Russian currency by undermining financial authorities’ ability to support it by using reserves to purchase roubles.

Kremlin spokesman Dmitry Peskov described the sanctions as “heavy,” but argued that “Russia has the necessary potential to compensate the damage.”

The steps taken to support the rouble are themselves painful because raising interest rates can hold back growth by making it more expensive for companies to get credit. Russians who have borrowed money, such as homeowners with mortgages or business owners who have taken out loans, also could get hit by doubled interest rates, experts said.

The rouble sank about 30 per cent against the US dollar early Monday but steadied after the central bank’s move. Earlier, it traded at a record low of 105.27 per dollar, down from about 84 per dollar late Friday, before recovering to 94.60.