President Biden and First Lady Jill Biden team up on Sunday evening at the White House for a Fourth of July barbeque with essential workers and military families that marks America’s independence as the country recovers from the coronavirus pandemic.

The event caps a weekend of trips the White House touted as the “America’s Back Together” tour, which saw the president, the first lady, Vice President Kamala Harris, and her husband, second gentleman Doug Emhoff, fan out across the country to spotlight the administration’s efforts to help the nation rebound from the COVID crisis – the worst pandemic to sweep the globe in a century – and the severe economic recession that it triggered.

The president traveled to northern Michigan on Saturday, talking with workers and a crowd that had gathered at an orchard, on the eve of the country’s 245 birthday. He was joined Democratic Gov. Gretchen Whitmer of Michigan, as well as the state’s two Democratic senators – Debbie Stabenow and Gary Peters. The president and his entourage later stopped at an ice cream shop. 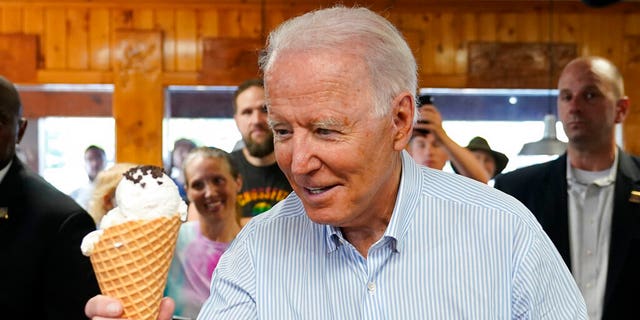 “The senators told me, this is the best place in the world,” Biden said.

While the president was in Michigan, his wife was in New England, making stops in New Hampshire and Maine. The first lady was joined by New Hampshire’s two Democratic senators – Jeanne Shaheen and Maggie Hassan – at a barbeque at the Portsmouth home of Shaheen’s daughter.

“Who would have thought that we would be here on the 4th of July together again,” the first lady emphasized as she discussed how far the nation’s come since the pandemic shut down the country in March and April of last year.

Stopping at a union training center in Las Vegas, the vice president met with volunteers packing emergency food boxes for families who’ve lost their jobs amid the pandemic.

But as Harris was in Nevada, the Republican National Committee took to Twitter to spotlight that “there are still 9.5 million unemployed workers. At the current pace under Biden, the economy WILL NOT recover all the lost jobs until JUNE 2022!”

A day earlier, the vice president’s husband met with staff, volunteers, and onlookers as he visited Bryce Canyon National Park in southern Utah.

“I want to tell you and all Americans to make sure if you’re not vaccinated, to please get vaccinated,” Emhoff said.

But the White House recently acknowledged that the nation would fall short of the president’s COVID vaccination goal. Biden aimed to have at least one COVID shot in the arms of 70% of the nation’s adult population, but health officials said that 67% of American adults had received at least one shot as of Saturday.

The Bidens separated again on Sunday, with the first lady traveling to Philadelphia’s Independence Hall in Pennsylvania to deliver remarks as part of the “America’s Back Together” tour.

Biden, who grew up in suburban Philadelphia, told the crowd “there’s no place this Philly girl would rather be than here with you.”

While the tour is not considered overtly political in nature, it’s worth noting that four of the states being visited – Michigan, Nevada, New Hampshire, and Pennsylvania – are key presidential battlegrounds that will also hold crucial contests in the 2022 midterm elections.

While the first lady traveled to Independence Hall, the president visited church and later played a round of golf near their home their Wilmington, Delaware home with former Sen. Ted Kaufman, a longtime Biden friend, aide and adviser.

Later on Sunday, the president and first lady will host roughly 1,000 people on the South Lawn of the White House, which marks the first large-scale event hosted by the Biden since the start of his presidency in late January.

The celebrations come as the contagious delta variant is on the rise. It’s currently responsible for more than quarter of all COVID infections, largely among those who are not fully vaccinated. And that’s sparked some allies of the president to warn that it’s still too early to declare victory in the battle against the pandemic.