A member of the anti-government Oath Keepers militia kept a “death list” at his house and texted other extremists about weapons before taking part in the violent siege at the U.S. Capitol in January, according to prosecutors.

Thomas Caldwell, a 66-year-old Navy veteran who authorities allege organized far-right militia members’ travel to Washington, D.C., and took part in the storming of the Capitol, is currently under arrest and facing multiple criminal counts related to the riot. Caldwell’s lawyers have requested his release from custody, but prosecutors opposed the motion, citing evidence that Caldwell represents a serious danger to the community and the country in a memorandum on Thursday.

“Caldwell dehumanized those who held opposing worldviews and discussed killing them, shooting them, and mutilating their corpses to use them as shields,” prosecutors state in the filing.

When authorities searched Caldwell’s home in Virginia on Jan. 19, prosecutors say they recovered a document which he had entitled “death list” and included the name of an out-of-state election official. Law enforcement also found sales receipts for hundreds of dollars in ammunition, a flag popular with far-right groups and a concealed firearm designed to look like a cell phone.

Before the riot, Caldwell also allegedly researched weapons and sent out links to other apparent Oath Keepers. One of the weapons was a “Surgical Steel Tomahawk Axe” which he found on Ebay, and which had the appearance of a tactical hatchet with the words “zombie killer” printed on the blade. 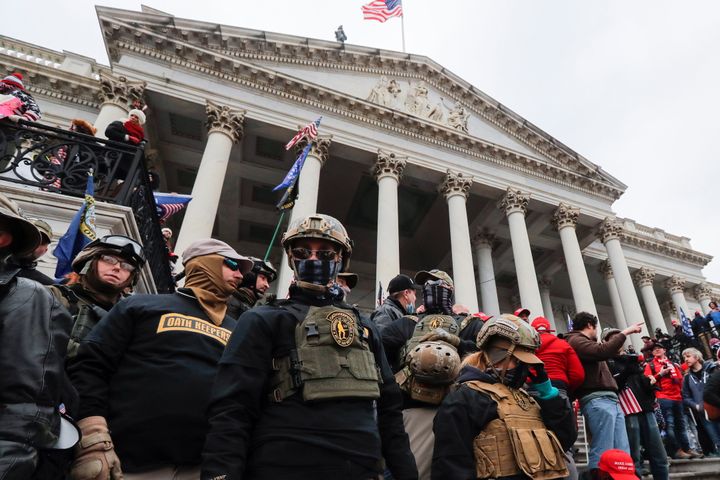 Caldwell’s social media posts leading up to the riot included calls to join him in Washington, and the repetition of baseless election fraud conspiracies. In one Facebook post days before the siege, Caldwell commented, “Let them try to certify some crud on capitol hill with a million or more patriots in the streets. This kettle is set to boil…”

Caldwell also discussed and organized plans to attend the Jan. 6 rally with other extremists who would later storm the Capitol. Messages between Caldwell and militia members Donovan Crowl and Jessica Watkins include discussions of logistics for attending the rally and talk of other Oath Keepers who would attend.

Watkins, a military veteran and member of the Oath Keepers, also texted Caldwell about how they could sneak weapons into Washington, D.C., and discussed having Oath Keepers waiting outside the city to deliver them guns.

At one point in November, prosecutors stated that Watkins was worried that Trump had not asked for them to take action and that she was waiting for some kind of invitation from him. But Watkins had the encouragement she needed by the end of December, texting Crowl that she was ready to go.

“Trump wants all able bodied patriots to come,” Watkins messaged, adding that she would “hate to miss it” if Trump invoked the insurrection act ― a reference to a QAnon conspiracy theory claiming that Trump was planning to authorize a military takeover of the government at the time.

After the riot, Caldwell sent celebratory videos and messages about the attack that he later deleted, in what prosecutors claim was an attempt to destroy evidence. Caldwell also invited his co-defendant Crowl to hide gear and evidence in his house.

Prosecutors charged Caldwell, Watkins and Crowl last month with a series of offenses that include conspiracy to injure or impede an officer, violent entry or disorderly conduct, and obstruction of an official government proceeding. They are part of a growing number of rioters associated with far-right groups and anti-government militias who have been charged in connection with the insurrection.