Andrew Cuomo officially handed in his resignation letter on Monday night, stepping down as New York’s governor. His resignation makes way for Kathy Hochul to be sworn in and become the state’s first woman in the position.

“It has been my pleasure to serve with you both,” Cuomo wrote in the brief letter, which was addressed to the leaders of New York’s state assembly.

Cuomo, a Democrat who was first elected governor in 2010, will formally end his term at 11:59 p.m. Monday, two weeks after announcing he would resign. Calls for him to step down had increased after a report concluded he had sexually harassed female employees.

Cuomo has still denied any wrongdoing.

An independent investigation overseen by New York Attorney General Letitia James found credible evidence that the governor had sexually harassed at least 11 female employees. One aide has since filed a complaint with the Albany County Sheriff’s Office, alleging Cuomo groped her.

Investigators also found that Cuomo’s senior staff, including secretary Melissa DeRosa, retaliated against at least one of the women and tried to undermine her credibility. DeRosa announced her resignation not long before Cuomo.

Cuomo has repeatedly claimed he never touched anyone inappropriately, calling the investigation “unfair” and “untruthful” and arguing the women’s testimonies haven’t been “scrutinized and verified.” He has not acknowledged any improper behavior, and has instead claimed that the women misinterpreted his actions.

“I thought a hug and putting my arm around a staffer for a picture was friendly, but she found it to be too forward,” Cuomo said during his resignation announcement. “I have slipped and called people ‘honey,’ ‘sweetheart’ and ‘darling.’ I meant it to be endearing, but women found it dated and offensive.” 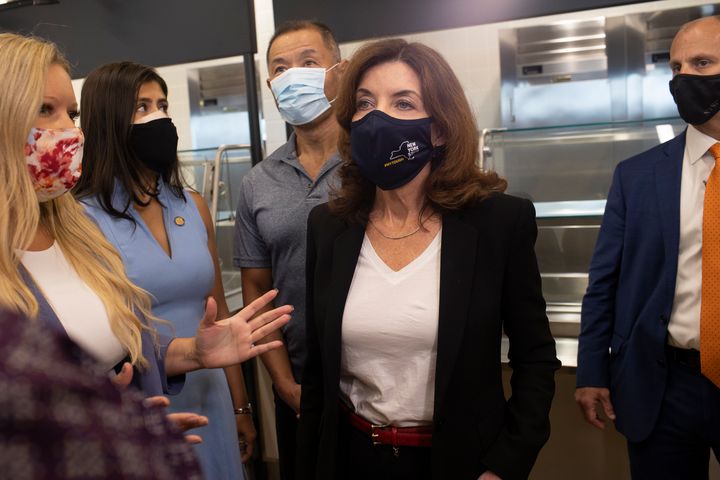 Cuomo also came under fire in January, when James released a separate report that found his administration was reporting 50% fewer COVID-19 deaths in nursing homes in New York than had actually occurred. When putting together official tallies, the administration did not count nursing home residents who had died of the disease in hospitals.

Two weeks after that report was released, details leaked of a conversation between DeRosa and state lawmakers in which she admitted the governor had postponed releasing comprehensive nursing home death data out of fear that President Donald Trump’s administration would use it for political attacks.

Cuomo initially refused to step down after the report about sexual harassment was released, even as a growing number of lawmakers across the political spectrum — including President Joe Biden — called for his departure. The governor eventually announced his resignation a week after that report came out, and once it became clear that the New York state legislature had enough support to impeach him.

“Prolonging this situation could only cause governmental paralysis and that is just not an option for you and not an option for the state, especially now,” Cuomo said Monday at his farewell address, which he used to once again defend himself and question the motives of both investigators and the women accusing him of harassment.

Hochul, also a Democrat, said she didn’t work closely with Cuomo and was unaware of the harassment allegations before they became public. She vowed to not create a toxic workplace, saying last week that she has a “different approach to governing.”

“Sexual harassment is unacceptable in any workplace, and certainly not in public service,” Hochul said when James released her report. “The AG’s investigation has documented repulsive & unlawful behavior by the Governor towards multiple women. I believe these brave women & admire their courage coming forward.”

But Hochul is inheriting an administration facing criticism for inaction during Cuomo’s chaotic final months as governor.

She announced Monday that she plans to appoint Karen Persichilli Keogh as her secretary and Elizabeth Fine as her chief legal counselor. The new governor plans to keep on employees from Cuomo’s administration for 45 days, which will give her time to interview new hires, but stressed she would not employ anyone found to have acted unethically.

She also said she plans to run for governor in next year’s elections. In the meantime, Hochul will have to prove that she can successfully balance several major crises in the state — particularly those related to COVID-19, including public safety measures for the school year and a struggling economy.