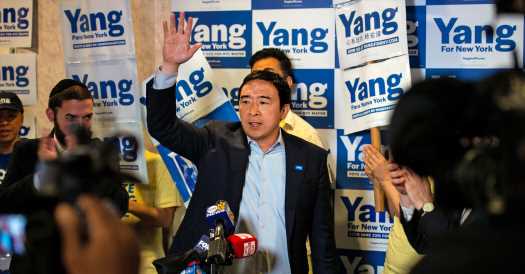 Andrew Yang, the former long-shot presidential candidate and onetime technology entrepreneur, announced on Monday that he had left the Democratic Party and become an independent.

In an essay on his website, Mr. Yang, who built a passionate following in 2019 during the party’s primary race, highlighted his work for Democrats. He noted the deep relationships he had developed with activists and local leaders and the fund-raisers he had headlined, and he took credit for helping to elect the party’s candidates, including President Biden.

Yet he described the two-party system as “stuck,” saying he could be more “honest” about politics and politicians if he were not constrained by official membership as a Democrat. Mr. Yang offered his support for alternative election systems, like open primaries and ranked-choice voting, saying these were “key reforms” that would give voters more choices in campaigns.

“I believe I can reach people who are outside the system more effectively,” he wrote. “I feel more … independent.”

Mr. Yang has struggled to find his footing since skyrocketing to prominence during the 2020 race. One of the highest-profile Asian Americans to ever run a presidential campaign, Mr. Yang built a fiercely loyal following of disaffected voters through proposals like providing every American with a universal basic income of $1,000 per month.

After ending his unlikely campaign, he joined CNN as a political commentator, started his own podcast and moved to Georgia to help Democrats win the runoff Senate races in January.

A bid for New York City mayor this spring ended in defeat, after Mr. Yang struggled to answer basic questions about the functions of city government and failed to build on early momentum.

Last month, he announced plans to start his own political party called “The Forward Party” — a phrase lifted from the last chapter of his recently published book.

In an excerpt from his book published by Politico Magazine this week, Mr. Yang recounted the strangeness of running for president and how the experience had inflated his sense of his own importance.

“I’d been a C.E.O. and founder of a company, but running for office was a different animal,” he wrote. “Everyone in my orbit started treating me like I might be a presidential contender. I was getting a crash course in how we treat the very powerful — and it was weird.”

He added: “It turns out that power actually gives you brain damage.”