Home » Politics » As U.S. Troops Searched Afghans, a Bomber in the Crowd Moved In 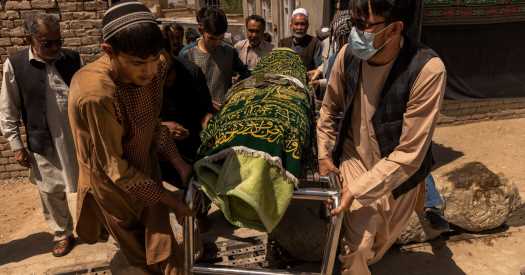 As U.S. Troops Searched Afghans, a Bomber in the Crowd Moved In

A crowd straining to get into Hamid Karzai International Airport had converged on Abbey Gate, a main entryway manned by Marines and other service members. The troops knew that they could be targeted in an attack; just the day before, the State Department had warned of a “credible” threat at three gates at the airport, where more than 5,000 American troops had helped to evacuate more than 100,000 people in less than two weeks. Abbey Gate was on the list.

They also said they believed that, earlier in the day, Taliban commanders and fighters manning checkpoints along the airport route had foiled two possible attempts by militants to reach the airport.

But the third one got through.

At 5:48 p.m., the bomber, wearing a 25-pound explosive vest under clothing, walked up to the group of Americans who were frisking people hoping to enter the complex. He waited, officials said, until just before he was about to be searched by the American troops. And then he detonated the bomb, which was unusually large for a suicide vest, killing himself and igniting an attack that would leave dozens of people dead, including 13 American service members.

“This is close-up war — the breath of the person you are searching is upon you,” Gen. Kenneth F. McKenzie Jr., the head of United States Central Command, said on Thursday after the attack, describing the face-to-face contact between Marines at the airport gate and Afghans they must search before allowing them to enter.

Pentagon officials said they were still piecing together the chain of events that took place at Abbey Gate on Thursday. There will be after-action reviews and storyboards with detailed lists of what led up to that moment. There will be questions: Why were so many service members grouped so close together? How did the bomber evade the Taliban checkpoints? Did someone let him through?

As the scope of the damage became clearer, health officials in Kabul raised the death toll, saying at least 170 people had been killed. Afghans seeking to escape Taliban rule continued to stream to the airport on Friday, but the size of the crowd was estimated in the hundreds, down from the thousands who were there when the blast occurred. The airport remained largely locked down, although evacuation flights continued.

Just after 2 p.m. Friday, as another gray-tailed U.S. aircraft lifted into the sky from the airport, this one carrying the flag-draped coffins of the 13 Americans, the anguish from Thursday’s bombing spread from Kabul to Kansas. At the mortuary at Dover Air Force Base in Delaware, service members were bracing for the ritual of dressing and preparing yet another group of American troops killed in Afghanistan.

“I’m never been one for politics and I’m not going to start now,” Marilyn Soviak, the sister of Maxton Soviak, a Navy corpsman from Ohio who was among the dead, posted on Instagram. “What I will say is that my beautiful, intelligent, beat-to-the-sound of his own drum, annoying, charming baby brother was killed yesterday helping to save lives.”

Just after the bomb went off, Defense Department officials said, fighters nearby began firing weapons. The officials said that some of the Americans and Afghans at Abbey Gate might have been hit by that gunfire. There was so much confusion in the aftermath of the explosion that the military initially reported that a second suicide bombing had taken place at nearby Baron Hotel. That turned out to be false, according to Maj. Gen. Hank Taylor, the Joint Staff deputy director for regional operations. 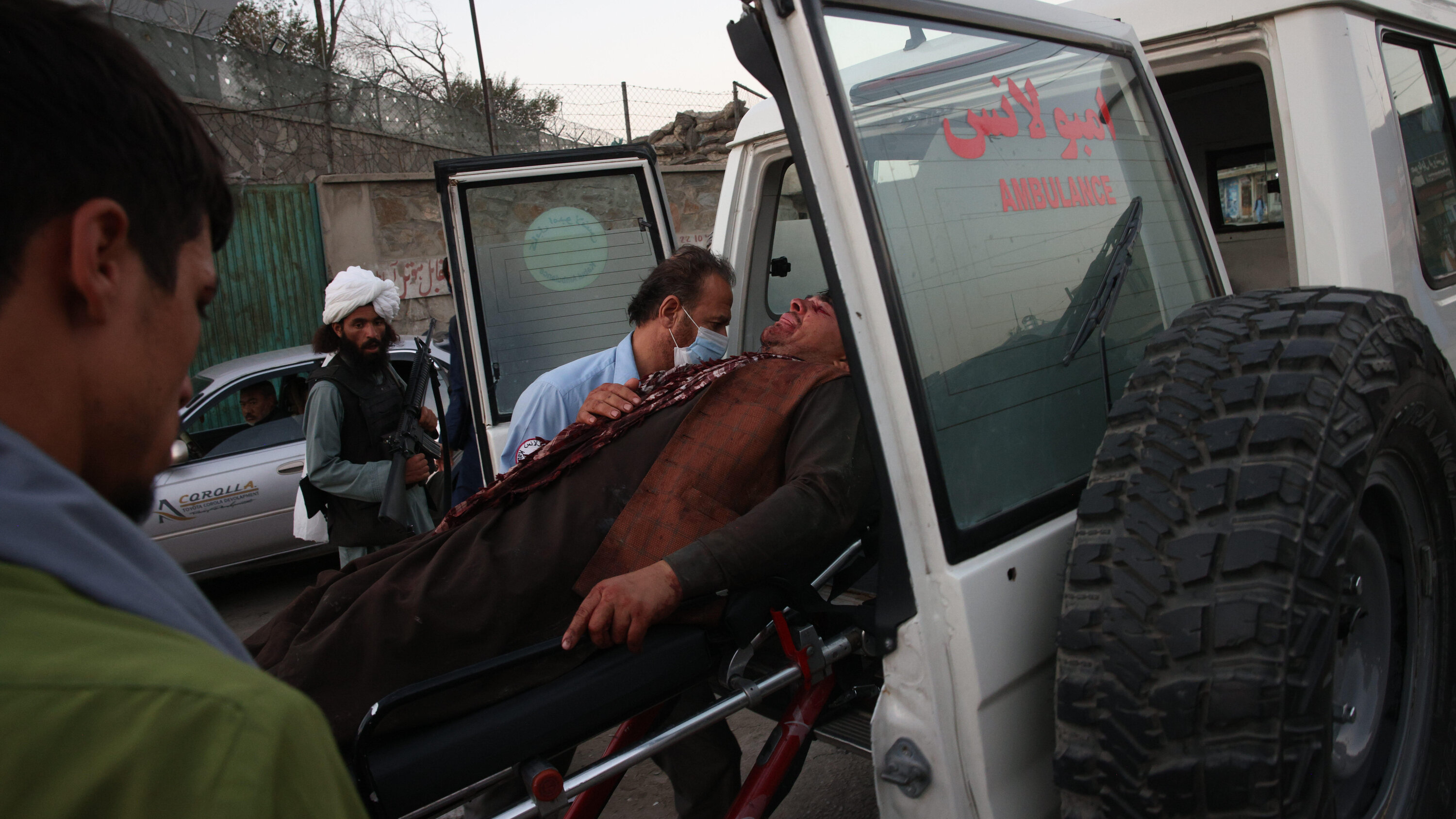 At 25 pounds, the vest worn by the suicide bomber did untold damage. According to Army manuals, suicide bombers typically wear either a belt containing 10 pounds or less of explosives, or a vest packed with 10 to 20 pounds of explosives. With a 25-pound vest that included pieces of metal that acted as lethal shrapnel, the bomber also wounded dozens of Afghans, as well as 14 additional American troops, who were medevacked to Landstuhl Regional Medical Center near the Ramstein Air Base in Germany.

From the moment last month that Defense Secretary Lloyd J. Austin III ordered a Marine Expeditionary Unit from the U.S.S. Iwo Jima to disembark in Kuwait and be ready to help with evacuations in the event that Kabul fell to a surging Taliban, it has been clear to American troops that they could once again end up on the front lines of a war in Afghanistan that has been declared finished by a succession of presidents.

It did not take long for Hamid Karzai International Airport to transform from a commercial hub to the final defensive position for the U.S. military, which had once surged tens of thousands of troops to far-flung corners of Afghanistan. Apache gunships circled overhead, and Marine quick-reaction forces orbited the perimeter. In the command center, feeds from drones and surveillance cameras piped in infrared images of crowds massing at the gates.

Understand the Taliban Takeover in Afghanistan

Who are the Taliban? The Taliban arose in 1994 amid the turmoil that came after the withdrawal of Soviet forces from Afghanistan in 1989. They used brutal public punishments, including floggings, amputations and mass executions, to enforce their rules. Here’s more on their origin story and their record as rulers.

Who are the Taliban leaders? These are the top leaders of the Taliban, men who have spent years on the run, in hiding, in jail and dodging American drones. Little is known about them or how they plan to govern, including whether they will be as tolerant as they claim to be.

How did the Taliban gain control? See how the Taliban retook power in Afghanistan in a few months, and read about how their strategy enabled them to do so.

What happens to the women of Afghanistan? The last time the Taliban were in power, they barred women and girls from taking most jobs or going to school. Afghan women have made many gains since the Taliban were toppled, but now they fear that ground may be lost. Taliban officials are trying to reassure women that things will be different, but there are signs that, at least in some areas, they have begun to reimpose the old order.

What does their victory mean for terrorist groups? The United States invaded Afghanistan 20 years ago in response to terrorism, and many worry that Al Qaeda and other radical groups will again find safe haven there.

The Marines who were manning Abbey Gate on Thursday had arrived in Kabul about a week earlier. They were fresh, and linked up with their British paratrooper counterparts with one goal in mind: Get as many people through as possible. That meant using an interpreter and a loudspeaker to persuade a surging crowd to move back, a painstaking task that allowed the Marines to open two entry points.

The fall of Kabul had unleashed a tsunami of phone calls, emails and desperate texts from the foreign organizations that had worked in Afghanistan over the past 20 years, all imploring the Pentagon for help getting their Afghan workers and allies evacuated. Other people who worked with Afghans, including teachers who visited schools in Afghanistan, joined American senators, media chiefs and the heads of global organizations in asking for help for their former partners, who are in danger of Taliban reprisals.

The requests reached the American troops at Kabul airport. “The Marines who died were the ones who were helping our team,” said Cori Shepherd, a filmmaker who once helped Afghan girls come to school in the United States. “These men were quite literally going into the masses and pulling our women to safety, while coordinating with our guy to find them. The men who worked Abbey Gate were brave beyond measure.”

But in the end, “there’s no substitute for a young man or woman — a young United States man or woman — standing up there conducting a search of that person before we let him in,” General McKenzie said.

The effort to get vulnerable people out of Afghanistan will continue, he said. “Because that is why we are there.”