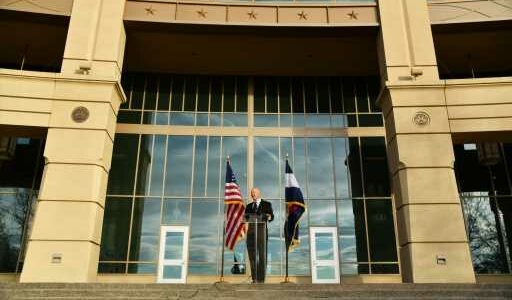 A resurrected proposal to ban urban camping in Aurora got its first stamp of approval by the city council just before midnight Monday, but not before dozens of people weighed in during the nearly four-hour hearing.

The city is headed toward joining several other Colorado cities in enacting such bans, including Denver, with the ordinance seeking to ban urban camping to “promote aesthetics, sanitation, public health, and safety for individuals in an unauthorized camp and the citizens of the City.”

Council members will vote at least one more time — two if substantive changes are passed — before the law can be enacted, but the successful vote Monday indicates enough support for the ban to become law early this year.

A previous effort by Mayor Mike Coffman to pass a ban failed in August in a tie 5-5 vote, but with the election of new conservative members, the body voted 6-5 (with the mayor casting the deciding vote to break a tie) in favor of the proposed ordinance that would set regulations for removing unauthorized camping on public or private property. Police could remove homeless encampments after city officials give campers at least 72-hours notice to move themselves and their belongings — with some exceptions — or face citations or arrest. The city would also have to make sure shelter space is available for the individual or people in an encampment before requiring them to move.

The meeting led to regularly heated exchanges and shouting from the audience, admonishments to the crowd by the mayor pro tem Francoise Bergan, and even one man who identified himself as a homeless veteran saying he would challenge Coffman for the mayoral position if the ordinance passed. Proponents of the measure argued that the city needed to address the growing problem of homelessness for business owners and residents and require people to seek shelter off the streets, while opponents — a large number of whom were rallied by the group The Party for Socialism and Liberation — argued it was inhumane, criminalized homelessness and would open up the city to future litigation.

Council member Curtis Gardner said the ordinance wouldn’t solve all the issues associated with homelessness in Aurora, but that the council needed to implement the ban “because our current status quo is not working.”

“I’ve had responsibility before for a business location that had an encampment on it where the police had to respond eight different times because they couldn’t serve a trespass notice because we did not have a policy like this in place,” he said. “That is not acceptable. Further, our first responders are already going to these locations and they’re encountering things like needles, human feces, booby traps, a whole variety of things.”

Aurora Police Chief Vanessa Wilson has opposed earlier efforts to ban camping, saying her agency was already understaffed and officers would be opening themselves up to further liability if they were charged with breaking up encampments.

Most efforts by the progressive members of the city council to delay or amend the ordinance, such as changing the notification from 72 hours to seven days or to create a one-year sunset were rejected. However, council member Crystal Murillo’s proposal to ensure storage space is provided for people’s belongings received support if she made changes to it, so she plans to bring language for approval back to the city council as the measure makes progress toward becoming law.

Councilmember Juan Marcano said the ordinance “will not do a damn thing to improve the quality of life for our residents” and is not a real solution or investment of money to actually solve the problem.

“Camping bans don’t work,” he said. “The people who continue to sell you they do are lying to you, taking advantage of your trust and good faith, for their own personal benefit and for the benefit of their donors. It is pure politics, it’s disgusting, just despicable, and you all deserve better.”

The city council approved a secondary resolution early Tuesday morning, also sponsored by Coffman, calling on the city to make sure there are sufficient shelter options for people whose encampments have been dispersed, which can include shelters, city-designated safe outdoor spaces or pallet shelters, a hotel or motel voucher for 72 hours, a space in a health care or mental health facility or space in foster or youth facilities.

Director of Aurora’s Housing and Community Services Department Jessica Prosser told council members that current capacity for shelter space is about 200-250, without it being cold weather. She said she doesn’t think the city can have a lot of new options within 30 days when the camping ban is implemented, but city staff could bring back some potential options for new implementation later in March.

There are about 594 people in Aurora experiencing homelessness, according to the latest Point in Time count, but that number is considered to be an undercount.

In an interview Friday, Policy Manager of Healthier Colorado Michael Ruddock told The Denver Post that the camping ban ordinance is taking protocols and procedures the city already has in place to create a structure for something that hasn’t worked in the past and will instead shuffle people around. Homelessness has continued to increase in the city, he said, and people could be jailed, rather than address the root causes of homelessness and get people access to permanent supportive housing, as well as mental and physical health care.

“I think it’s definitely missing the forest for the trees,” Ruddock said. “The problem is lack of investments in housing and shelters.”

Aurora removed 79 homeless encampments in 2021 at a cost of $115,000, according to data provided by Healthier Colorado. The group pointed to a 2020 study by Denver Homeless Out Loud showing that in Denver, where there has been a homeless camping ban, 70% of people moved to a nearby block after a sweep.

Sidney Fisk, who spoke during public comment, called the measure “cruel and classist” and told council members that “you are crying about a problem that you have created, and that you continue to contribute to.”

She, like other commenters, noted that people experiencing homelessness who may be ticketed will not be able to pay their fines and she said they will instead be harassed by a police agency she accused of targeting marginalized communities. An attorney general’s office investigation of Aurora police found a pattern of racially-biased policing and use of excessive force that routinely violated state and federal law.

Fisk questioned where people who are facing addiction problems or identify as LGBTQ will be able to go. Other commenters took jabs at what they viewed as the stunt pulled by Coffman as “Homeless Mike” when he went undercover to live as a person experiencing homelessness.

A smaller contingent of residents showed up to the meeting or called in support of the measure, with one person calling it the “compassionate approach to dignity and safety for all of Aurora.”

Aurora small business owner Danny Moore brought up issues of safety and sanitation, but said he urged support of the ban because “our empathy for public camping has created a hammock that prevents people who need the most help from getting it.”