A policy has not been set. But nursing home residents and health care workers would most likely be first in line. 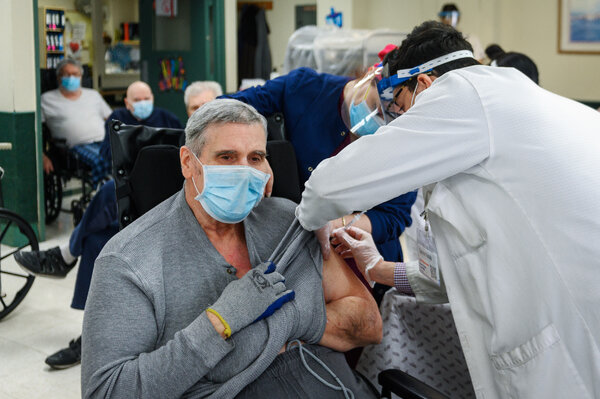 WASHINGTON — With a stockpile of at least 100 million doses at the ready, Biden administration officials are developing a plan to start offering coronavirus booster shots to some Americans as early as this fall even as researchers continue to hotly debate whether extra shots are needed, according to people familiar with the effort.

The first boosters are likely to go to nursing home residents and health care workers, followed by other older people who were near the front of the line when vaccinations began late last year. Officials envision giving people the same vaccine they originally received. They have discussed starting the effort in October but have not settled on a timetable.

While many outside experts argue there is no proof yet that the vaccines’ protection against severe disease and hospitalization is waning in the United States, administration officials say they cannot afford to put off figuring out the logistics of providing boosters to millions of people until that tipping point is reached. The spotty nature of the nation’s disease-reporting network makes the question of timing even trickier.

The effort comes as yet another wave of the coronavirus grips the nation, reversing much of the progress the administration had made. Hospitals in states like Texas, Louisiana and Mississippi are again swamped with patients, the vast majority of them unvaccinated.

Among other indicators, officials say, the administration is carefully watching Israel, where some data suggests an uptick in severe disease among older adults who received the Pfizer-BioNTech vaccine early in that nation’s campaign, according to people who have reviewed it. Some officials are concerned that even if a decline in protection merely results in mild or asymptomatic infections, those infected people could still spread the virus and prolong the pandemic.

Any booster policy decision is fraught, officials said, because the administration does not want to undermine public confidence in what have proved to be powerfully effective vaccines. Nor does it want to overvaccinate Americans when many other countries have yet to even begin vaccination campaigns in earnest, increasing the threat of dangerous new variants that could spread to the United States and evade the vaccines.

The World Health Organization has called for a moratorium on booster shots until the end of September, saying available doses should be used to help countries that are far behind in vaccinations.

Regulators for the European Union said this month that there was not yet enough data to justify boosters. Germany and France nevertheless have announced plans to start giving booster shots to the older adults and other vulnerable populations next month.

Israel, which is already administering booster shots to people over 60, announced on Thursday that it would offer them to those over 50 as well. Britain so far is holding off, but already has a detailed plan for distributing boosters to people 50 and over.

More than a million Americans have already managed to get booster shots, even though the Food and Drug Administration has not even been asked to rule on whether they are safe or effective.