Biden Faces Challenge From Surge of Migrants at the Border

The president’s promise of a more humane policy is being tested as more unaccompanied children seek to enter the United States from Mexico. 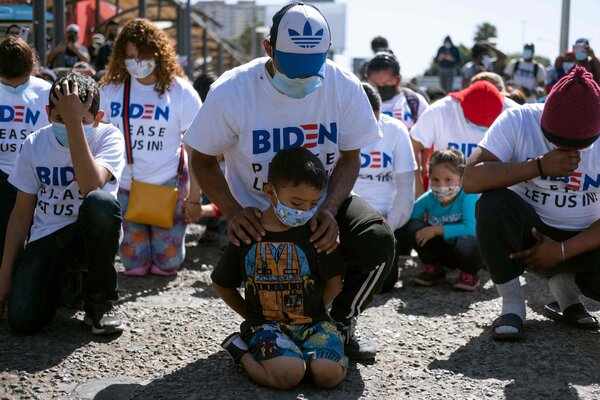 WASHINGTON — Thousands of migrant children are backed up in United States detention facilities along the border with Mexico, part of a surge of immigration from Central Americans fleeing poverty and violence that could overwhelm President Biden’s attempt to create a more humane approach to those seeking entry into the country.

The number of migrant children in custody along the border has tripled in the past two weeks to more than 3,250, according to federal immigration agency documents obtained by The New York Times, and many of them are being held in jail-like facilities for longer than the three days allowed by law.

The problem for the administration is both the number of children crossing the border and what to do with them once they are in custody. Under the law, the children are supposed to be moved to shelters run by the Health and Human Service Department, but because of the pandemic the shelters until last week were limiting how many children they could accommodate.

The growing number of unaccompanied children is just one element of an escalating problem at the border. Border agents encountered a migrant at the border about 78,000 times in January — more than double the rate at the same time a year ago and higher than in any January in a decade.

Immigration authorities are expected to announce this week that there were close to 100,000 apprehensions, including encounters at port entries, in February, according to people familiar with the agency’s latest data. An additional 19,000 migrants, including adults and children, have been caught by border agents since March 1.

“We’re at an inflection point,” said Theresa Cardinal Brown, the director of immigration and cross-border policy at the Bipartisan Policy Center, an independent research group. “How quickly can the government process people safely and humanely?”

The situation resembles the huge wave of migrant children that filled detention centers in 2014 that preceded the harsh crackdown imposed by President Donald J. Trump. Seven years ago, Mr. Biden, the vice president at the time, traveled to Guatemala and declared that “the current situation is untenable and unsustainable.”

Now, Mr. Biden is facing a migration challenge of his own — one that his administration has refused to call a “crisis” but could nevertheless become a potent political weapon for his Republican adversaries and upend his efforts to legalize millions of undocumented immigrants.

The president has proposed overhauling the nation’s decades-old immigration system by making it easier for asylum seekers and refugees, expanding legal pathways for foreign workers, increasing opportunities for family-based immigration and vastly reducing threats of mass deportations. His State Department announced on Monday that foreigners rejected after Jan. 20, 2020, under Mr. Trump’s travel ban could try to obtain visas without paying additional fees.

But his approach — to broadly reopen the nation’s borders to vulnerable children with what he hopes will be a welcoming contrast to Mr. Trump’s erection of legal and physical barriers — is already at risk from the grim realities of migration patterns that have roiled the globe for years. Sensing a change in tone and approach after Mr. Trump’s defeat, migrants are once again fleeing poverty, violence and the devastation left by hurricanes and heading north toward the United States.