Biden is set to host a naturalization ceremony to celebrate Independence Day. 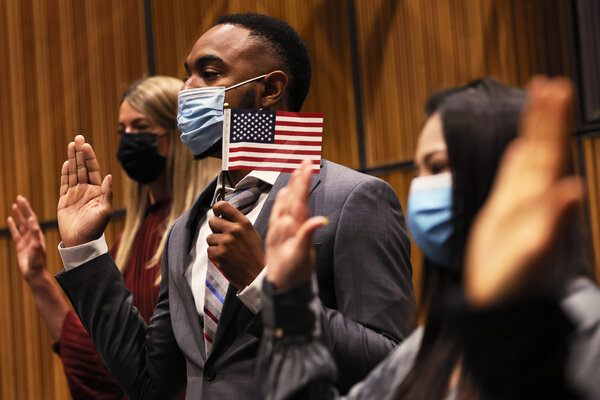 President Biden will host a naturalization ceremony on Friday afternoon at the White House as part of an effort by the federal government to swear-in almost 10,000 new citizens in celebration of Independence Day.

U.S. Citizenship and Immigration Services, which oversees the naturalization process, announced that it was holding 170 naturalization ceremonies across the country between June 30 and July 7, including the White House event and a June 30 virtual swearing-in by Alejandro N. Mayorkas, the homeland security secretary, for 22 military service members who were serving overseas.

The event with Mr. Biden will be the first naturalization ceremony at the White House since President Donald J. Trump hosted one during the Republican National Convention last August, using the trappings of presidential power during a campaign event in a departure from previous presidents that was widely criticized.

The five people who were naturalized were surprised they were invited to the White House, but some said they did not learn that the ceremony was broadcast until they were told by friends that they were on television.

Friday’s ceremony at the White House will also be a reminder of the sharp contrast in immigration policy under the two administrations. Mr. Trump’s denigration of migrants was the centerpiece of his 2016 presidential campaign, and he issued a torrent of orders that reduced refugee admissions; narrowed who is eligible for asylum; made it more difficult to qualify for permanent residency or citizenship; tightened scrutiny of applicants for high-skilled worker visas; and sought to limit the length of stay for international students.

The Biden administration intends to expand the legal immigration system, proposing policies that would help more foreigners move to the United States.

In a statement announcing the ceremonies, Citizenship and Immigration Services noted efforts to remove barriers to naturalization, including ending the use of a more difficult citizenship test the Trump administration put in place.

“U.S.C.I.S. reaffirms its commitment to making the naturalization process accessible to all who are eligible,” the agency said. “Reverting to the 2008 civics test was in keeping with other updates with the same purpose.”