Biden to meet with Afghanistan leaders amid Taliban resurgence, US troop withdrawal

WASHINGTON – President Joe Biden will meet with Afghan leaders at the White House on Friday amid an ongoing U.S. military withdrawal as Afghanistan’s future remains in limbo.

The president’s meeting with Afghan President Ashraf Ghani and Abdullah Abdullah, head of the country’s High Council for National Reconciliation, comes as U.S.-backed peace talks between the Afghan government and the Taliban have stalled.

Meanwhile, the militant Islamic group has gained new territory at an alarming clip in recent weeks. Renewed fighting has stoked fears that the Taliban will topple the Afghan government once American and NATO forces have left. 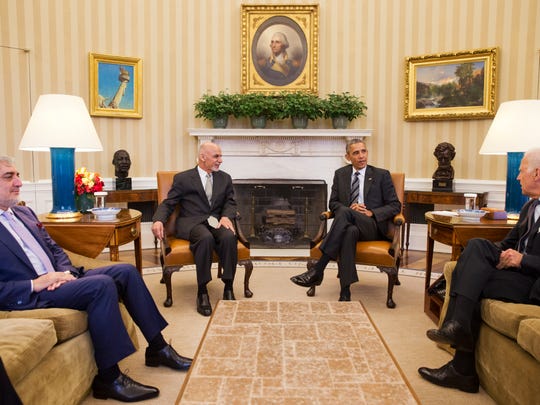 “The international community came here 20 years ago with this clear objective of fighting extremism and bringing stability … but extremism is at the highest point today,” Karzai told the Associated Press on Sunday.

They are leaving Afghanistan “in total disgrace and disaster,” Karzai said.

Secretary of State Antony Blinken said the U.S. was withdrawing militarily from Afghanistan but not disengaging from the country’s future.

“We intend to continue our support to humanitarian, economic (and) development programs, including support for women and girls,” Blinken told reporters on Thursday during a trip to Europe.

Blinken said the White House knows “there’s a real danger” the Taliban will try to retake the country by force and “that we’ll see a renewal of a war or possibly worse. … That’s a hard reality,” he said.

Ahead of Friday’s meeting, the Biden administration confirmed it would relocate thousands of Afghans who worked with the U.S. military as interpreters and translators while their visa applications are being vetted, according to a senior administration official.

That decision came amid growing pressure from lawmakers in both parties who fear those Afghans who served alongside American troops will be killed by the Taliban as the U.S. completes its military withdrawal.

20 years of war in Afghanistan

In April, Biden announced the U.S. would withdraw all troops by Sept. 11, the 20-year anniversary of the 9/11 attacks that triggered America’s longest war. He said the U.S. had achieved its goals of routing al-Qaida.

“We delivered justice to Bin Laden a decade ago, and we’ve stayed in Afghanistan a decade since then,” Biden said in an April 14 speech, referring to the 2011 killing of Osama Bin Laden, the onetime leader of the al-Qaida terrorist network.

In announcing Friday’s meeting, White House spokeswoman Jen Psaki said the Biden administration remains committed to working with the Afghan government “to ensure the country never again becomes a safe haven for terrorist groups who pose a threat to the U.S. homeland.”