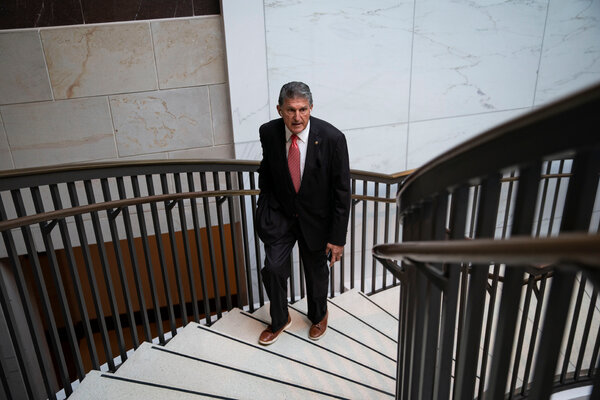 President Biden plans on Wednesday to meet separately with two Democratic senators who have refused to back the party’s $3.5 trillion economic package, as congressional leaders race to resolve internal divisions over the scope of the plan and how to pay for it.

The two senators — Kyrsten Sinema of Arizona and Joe Manchin III of West Virginia — have repeatedly said they will not support a measure so costly, imperiling the chances of a plan that will require the support of all Senate Democrats to pass. Ms. Sinema arrived at the White House early Wednesday morning, while Mr. Manchin is set to meet with Mr. Biden later in the day.

Liberal Democrats have argued that the $3.5 trillion package — packed with spending for climate change programs, public education, health care, child and elder care initiatives and paid leave, and financed by tax increases on the wealthy — is already a compromise. But Mr. Manchin and Ms. Sinema, who have staked out a more fiscally conservative stance than most in their party, have resisted the price tag. It remains unclear, however, what specific revenue proposals or spending provisions they want to curtail or remove.

Unity on the measure is crucial given that Republicans are unanimous in opposition. Democrats plan to push it through under a special budget process known as reconciliation, which shields it from a filibuster and allows it to pass on a simple majority vote. But given Democrats’ slim majorities, they cannot afford even one defection in the 50-50 Senate and can spare as few as three votes in the House.

The meetings come as House Democrats race to finish committee work on the sweeping package ahead of a self-imposed Wednesday deadline. But intraparty disputes continue to flare, including disagreements over how aggressively to raise taxes on the wealthy and how to ensure the package controls prescription drug prices. Both elements provide crucial revenue to pay for the plan.

Three Democrats — Representatives Scott Peters of California, Kurt Schrader of Oregon and Kathleen Rice of New York — have proposed a less aggressive drug pricing alternative than the one party leaders have drafted, which would most likely produce considerably less savings for the government.

If all three Democrats joined Republicans in opposing the leadership’s plan, they could block the legislation from advancing out of the House Energy and Commerce Committee, depriving Democrats of a substantial chunk of the revenue they need to finance the reconciliation bill. The committee could take up the issue as early as Wednesday.