President Biden is known to be a lover of dogs – but did he recently give canines more credit than they deserve?

“Dogs may help cure cancer. It’s not a joke,” Biden told reporters Tuesday during a visit to a cancer hospital in Ohio this week.

“Dogs may help cure cancer. It’s not a joke.” 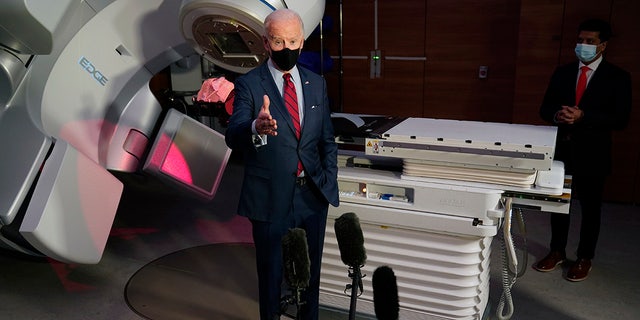 President Biden speaks during a tour of the James Cancer Hospital and Solove Research Institute, Tuesday on the campus of the Ohio State University Tuesday, March 23, 2021, in Columbus, Ohio. (Associated Press)

More precisely, dogs have been credited with helping to detect cancer in humans through their sense of smell, and to alert patients and medical workers. But whether that equates to helping “cure” cancer is a topic that drew some Twitter reactions.

Some noted that Biden’s seeming overstatement didn’t attract the same media scrutiny as some past health-related comments made by former President Trump.

“Remember when every[one] took trump as serious as can be when he said injecting bleach can cure covid,” one Twitter user wrote. “let’s all have that same energy toward Biden saying dogs may help cure cancer….some studies suggest they can detect blood cancer in legs, but that is farrrrrrr from curing joe.”

Another commenter asserted that Biden was relaying old news.

“They’ve been training dogs to smell cancer in people and for years,” user “Zach” wrote. “Read a book.”

As Biden continued his comments to reporters at the James Cancer Hospital at the Ohio State University in Columbus, he spoke about how dogs detect cancer in humans.

“Dogs are able to … They’re using dogs now … because their olfactory glands are 400 times what a human is … to smell cancer in people’s legs and people’s bodies. It’s not a joke. It’s a fascinating thing,” Biden added.

Biden, who lost his son Beau Biden to brain cancer in 2015, has pledged to make the fight against cancer a key focus of his administration.

Earlier this month, Biden said he was “optimistic” that lawmakers from both parties would help make “significant strides” in advancing cancer research in the years ahead.