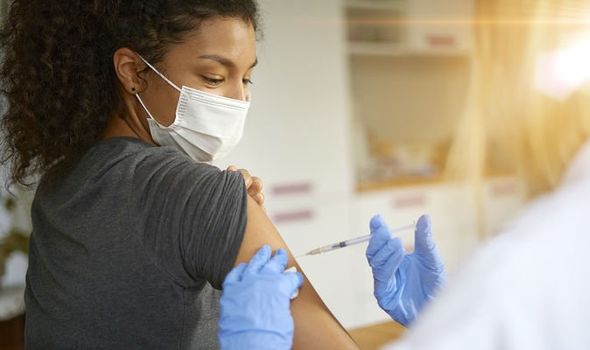 Boris Johnson has piled pressure on the NHS to go “faster” in delivering millions of top-up shots. His blunt message came after warnings that the latest mutation is “more transmissible” than previous strains, with an R-rate as high as 3.47.

Scientists said that would put huge pressure on health services if more people became infected than has happened so far with the previous Delta mutation of coronavirus.

The Prime Minister spoke out following fears that the vaccine rollout is struggling to hit top gear ‑ exactly a year today since the first Covid jab was given in the UK.

Some scientists claim Omicron cases appear to be doubling every two days.

The PM said: “The booster programme is the fastest in Europe. I think we have done more boosters than any comparable country.

“That doesn’t mean it couldn’t go faster. But yes…do I want people to come forward and get their booster? Absolutely I do.

“Now is the time to get it and of course, from Monday, we will be contracting the interval [between injections] so you go down to three months and that will lead to a big uptick in the programme as well.”

In a bid to accelerate the rollout, the NHS will today appeal for 10,000 more vaccination workers to help deliver jabs.

Concerns have been raised about the injection rate as 412,755 jabs were given on Saturday, down from 419,657 a week before.

Reports claim ministers want to see around 500,000 boosters being given every day.

Professor Alastair Grant, of the University of East Anglia, predicted Omicron’s reproduction rate based on figures from the UK Health Security Agency.

He said the high figure is due to “a mixture of it being good at transmitting itself and being a partial vaccine escape”.

The current R-rate in England is between 0.9 and 1.1, meaning that on average each infection will be passed to between nine and 11 other people.

Prof Grant said, as a “worst-case” scenario, there may be 2,500 Omicron cases in England. Two percent of positive swabs on Saturday were likely to be the latest variant: “These numbers are very preliminary. They are likely to be over-estimates as testing has focused on people at higher risk of infection because of their travel history or contact with confirmed Omicron cases.

“But it is very likely that Omicron will quickly come to dominate cases in England, and that overall case numbers will increase from their current levels.”

Mr Johnson yesterday updated the Cabinet on the risk posed by the strain.

His spokesman said: “The Prime Minister said it was too early to draw conclusions on the characteristics of Omicron but that early indications were that it was more transmissible than Delta.

“Further measures were introduced this week to help slow transmission and further seeding of the variant, and the Prime Minister reiterated that booster vaccines remain our best defence against new and existing variants, with the NHS on course to meet the target of offering a booster to all adults by the end of January.”

“The battle is not yet over and we are working around the clock to boost the booster programme to maximise immunity.”

To speed up the vaccination delivery, 450 military personnel have been drafted in to help and there will be extra pharmacy sites, hospital hubs and pop-up facilities.

Mr Javid said that from today, for millions of over-40s in England “we are halving the gap that people have to wait to get their booster to three months ‑ prioritising those most at risk of serious illness”. The bookings can also be made a month in advance.

Although Covid cases continue to rise, resultant hospital admissions are flat ‑ up just 0.7 percent in a week. It is feared that may increase in line with further infections.

No recorded Omicron case has led to a UK hospital admission, mirroring reports from the strain’s epicentre in South Africa.

But specialists warn even if it is not more deadly it is more transmissible, so the NHS may still be worse off than it was with other variants due to the numbers who will fall ill.

Prof Tim Spector told BBC Breakfast: “It means that perhaps twice as many people are going to pass it on from when someone gets it in a crowd.”

The genetic epidemiology expert at King’s College London added: “Eventually you will get more deaths and problems because nearly everyone is infected or re-infected.”

Another 101 Omicron infections were reported yesterday among a total of 45,691 Covid cases. A further 180 deaths following positive tests were registered.

Mr Johnson is set to review current restrictions, including mandatory masks on public transport and in shops, by December 18.

Dr Jeffrey Barrett, director of the Covid-19 genomics initiative at the Wellcome Sanger Institute near Cambridge, told Radio 4: “This variant is spreading faster in the UK than the Delta variant at the same time, and that’s something that I think was unclear until very recently.

“The fact that so far we have seen not very many severe cases of Omicron…maybe because it is infecting these individuals with some amount of immunity and that’s good news that they aren’t having tons of severe disease.

“It is too soon to assume that fundamentally Omicron is more mild than say Delta.”

Labour leader Sir Keir Starmer yesterday said: “We need to boost the booster programme. A number of weeks ago we said we should move to at least 500,000 a day. The figures this week are lower than last week.”

Sir Keir continued: “We are in a race now between this booster regime and the new variant. The Government should have acted weeks ago. It absolutely now needs to ramp this up and ramp it up immediately.”

Deputy Prime Minister Dominic Raab said on Radio 4: “We’re doing everything that can be done to tackle the risk that we face, and we’re doing it in the proportionate way that doesn’t create other risks and challenges.”

Asked why the Government is not implementing its contingency Plan B, he said: “Because of the success of the vaccine programme.”

A year ago today, the UK made history by administering the first approved Covid-19 vaccine in the world to 90-year-old Margaret Keenan.

It was a truly momentous occasion, after which the entire globe breathed a collective sigh of relief.

Since then, we have administered almost 120 million doses in every corner of the UK, saving countless lives and reducing pressure on the NHS.

This is testament to the brilliant work of the NHS, GPs, pharmacists, local authorities, volunteers and civil servants.

They all demonstrated what can be done when we work together.

At the height of our programme, there were a whopping 844,285 inoculations in one day, the equivalent of vaccinating the whole of Liverpool.

And now, with the emergence of the Omicron variant, we’re doing everything we can to rapidly expand and speed up the vaccination programme once again.

We will open extra hospital hubs, vaccine centres and pop-up sites; get support from the military; recruit 10,000 more NHS staff; give extra payments to GPs, community pharmacies and primary care staff; and communicate with those people who are hesitant to have a jab.

Almost 21 million boosters and third doses have been administered in the UK and almost 450,000 top-up jabs were given on Saturday alone, showcasing the amazing progress we are making.

While we do not yet know how effective existing vaccines will be against Omicron, it is likely they will provide at least some measure of protection, especially against severe illness.

Those who have received their booster are likely to have a stronger immune response, so it is vital that you get boosted as soon as you can to protect yourself and your family during winter.

The offer of a first and second dose will always be available if you haven’t had the jab. There is still time.

I implore everybody to play their part by getting vaccinated so we can enjoy Christmas safely with our loved ones.

Maggie Throup is Minister for Vaccines