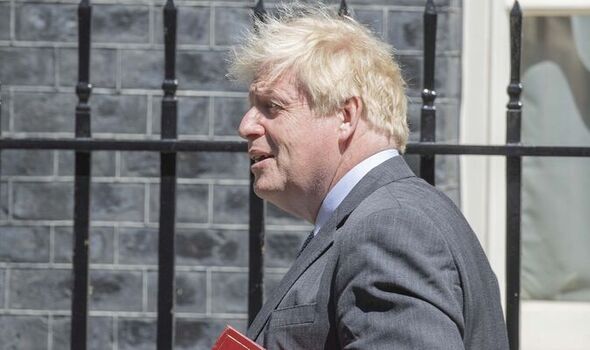 Downing Street is unsure whether to replace the peer who accused the Prime Minister of plotting a “deliberate” breach of the ministerial code. In a searing resignation letter, Lord Geidt said the PM had put him in an “impossible and odious” position.

It is understood the row centred on No.10 plans to slap tariffs on Chinese steel which risks breaking World Trade Organisation rules.

In his resignation letter Lord Geidt said: “A deliberate breach, or even an intention to do so, would be to suspend the provisions of the Code to suit a political end.

“This would make a mockery not only of respect for the Code but licence the suspension of its provisions in governing the conduct of Her Majesty’s Ministers. I can have no part in this.”

Downing Street said Mr Johnson was reviewing whether or not to fill the vacant position.

In his response, the PM said his intention was to seek Lord Geidt’s “advice on the national interest in protecting a crucial industry”.

He said the unspecified industry “is protected in other European countries and would suffer material harm if we do not continue to apply such tariffs”.

The Prime Minister’s official spokesman declined to say what critical national industry was at the centre of the issue, citing the “commercial sensitivity” of the outstanding matter.

“The fully independent Trade Remedies Authority has provided advice to ministers which found that a critical national industry – and obviously I can’t be more specific – is at risk of material harm if the Government does not take action, affecting businesses and livelihoods,” the official said.

He said the function of ministerial interests adviser was “vitally important” but that Mr Johnson was reviewing whether to directly replace Lord Geidt.

Instead, the Prime Minister wanted to “carefully consider” issues raised by Lord Geidt “before taking a decision on how best to fulfil that commitment about ensuring rigorous oversight and scrutiny of ministerial interests”.

He said a decision on the controversial trade matter could come “relatively shortly” and suggested it was not the intention to finish the review before ruling on the plan.

Mr Johnson insisted the matter had previously had cross-party support and that the request would be in line with domestic law “but might be seen to conflict” with the UK’s obligations under the WTO.

“In seeking your advice before any decision was taken, I was looking to ensure that we acted properly with due regard to the ministerial code,” Mr Johnson insisted.

Lord Geidt’s resignation on Wednesday came after he told MPs it was “reasonable” to suggest Mr Johnson broke the code by being fined by police for breaching Covid laws during lockdown.

In his letter, he said he was “disappointed” that the Prime Minister did not give a fuller account over how paying the fixed penalty notice did not breach the code.

Lord Geidt expressed “regret” that the reference to “miscommunication” between their offices implied he “was somehow responsible for you not being fully aware of my concerns”.

Lord Geidt is the second person to resign as Mr Johnson’s ethics adviser during his less than three years as Prime Minister.

Lord Geidt previously served as the Queen’s private secretary and before that he was an Army intelligence officer and diplomat.

But the 21-word statement left the reason for his departure a mystery until the exchange of letters was published as the Government came under pressure to provide clarity.

Labour demanded that Mr Johnson appoint a new watchdog to replace Lord Geidt and reiterated demands for Conservative MPs to remove the Prime Minister from office.

Deputy leader Angela Rayner said: “There are now no ethics left in this Downing Street regime propped up in office by a Conservative Party mired in sleaze and totally unable to tackle the cost-of-living crisis facing the British people.

“The Government must not only appoint a new watchdog but back Labour’s plan to restore standards. This Prime Minister has debased standards and rigged the rules for far too long.”