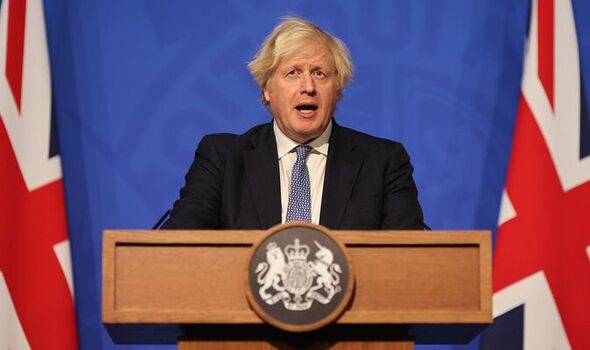 He will meet with his cabinet on Monday to get the green light to end the legal duty on people who test positive to self-isolate. The changes ‑ which are expected to come into force on Thursday February 24 ‑ are controversial and exclusive polling shows that swathes of the public plan to exercise caution rather than rush back to full normality.

Research by Redfield and Wilton Strategies found that nearly half of respondents would continue to avoid very crowded places (45 percent), and wear masks indoors (44 percent) and on public transport (47 percent).

More than a third (36 percent) will also maintain social distancing when out and about and a quarter (26 percent) will limit their social gatherings.

Despite the public caution, the Prime Minister’s announcement heralds the start of a new approach to dealing with the virus, of “living with Covid” and using vaccines as a first line of defence instead of enforcing lockdowns and emergency measures.

Local authorities will now be required to manage outbreaks through pre-existing public health powers, just as they would with other diseases.

The British Medical Association BMA ‑ the doctors’ trade union ‑ has warned that the decision to end all restrictions is “not based on current evidence and is premature” and the Royal College of Nursing has described ending the requirement to self-isolate as a “big leap in the dark”.

Dennis Reed, director of Silver Voices, which campaigns on behalf of older people, said members feared the dropping of the self-isolation requirement was going “too far and too fast”.

He was concerned this could lead to greater isolation for older citizens who will be reluctant to go out in case they come into contact with someone who is carrying the virus.

Mr Reed said: “That will mean there is no assurance in shops, in pubs, restaurants, wherever else, that the people you are sitting down with or mingling with are not infectious.”

Daisy Cooper, the Liberal Democrats’ health spokeswoman, blasted Mr Johnson, saying: “The Great British public has made huge sacrifices and scientists have made huge advances but Johnson looks to be throwing all of our efforts away. Boris Johnson doesn’t have a shred of credibility left to be making decisions like this for our country.

“He’s a threat to public health and a national embarrassment. Not satisfied with breaking the rules he wrote, he’s now planning to scrap the very measures which are keeping us all safe, leaving the public and scientists flying blind.”

But the PM argues the time has come to move from “Government intervention to personal responsibility”.

Mr Johnson said: “Covid will not suddenly disappear, and we need to learn to live with this virus and continue to protect ourselves without restricting our freedoms. We’ve built up strong protections against this virus over the past two years through the vaccine rollouts, tests, new treatments, and the best scientific understanding of what this virus can do.

“Thanks to our successful vaccination programme and the sheer magnitude of people who have come forward to be jabbed we are now in a position to set out our plan for living with Covid this week.”

Half of respondents in the Redfield & Wilton poll said they will continue to isolate if they test positive (50 percent) or get tested if they show any signs of symptoms (49 percent). And in a further sign of the continuing caution, more than a quarter (28 percent) of those polled said they would still avoid international travel once the regulations are lifted and a sixth (15 percent) would avoid pubs and restaurants.

The depth of concern among older people is demonstrated in the polling which found that more than half of those aged 65-plus intend to avoid crowds (54%) and nearly half (45 percent) said they will forgo a foreign trip.

The PM’s calculation that the country is ready to scrap restrictions on personal freedom will delight many Conservative MPs who are deeply worried about the impact of lockdowns and other restrictions on mental health, the economy and education.

Former work and pensions secretary Esther McVey said: “I am delighted that ‑ albeit belatedly ‑ the Prime Minister is due to announce the end to Covid restrictions this week. I very much hope he will also signal a resolve never to go down this lockdown path ever again”

Robert Halfon, who chairs the education select committee, said: “This could not be better news from Boris. We must never, never have a lockdown again given the damage lockdown has done to our nation’s wellbeing and, sadly, our children have suffered the most through lost education, lifetime chances, safeguarding and mental health.

“Now is the chance to put this right.”

Mark Harper, the Conservative MP who leads the Covid Recovery Group, said he would study the details of what Mr Johnson announces.

He said: “I look forward to hearing what the Prime Minister announces in the Commons ‑ a plan to properly live with Covid has been absent for far too long.

“My colleagues and I will be looking carefully at the small print ‑ let’s not forget that this is the same Prime Minister that, just before Christmas, was on the verge of imposing even stronger restrictions, before voices on the backbenches and in Cabinet, led by David Frost and Rishi Sunak, made him see sense.”

Sir David Spiegelhalter, a Cambridge University statistician, stressed the importance of keeping some form of the Office for National Statistics’ coronavirus study in place, saying: “It has been absolutely so important as we have gone along.”

The Government insists “surveillance systems and contingency measures” will be retained and increased testing and new vaccine programmes will be able to be launched to deal with new variants.

Baroness Ilora Finlay, a consultant in palliative medicine, urged people not to abandon the lessons of the last two years when restrictions are lifted, warning that “infections are everywhere and the germs are one step ahead of us,” adding that “a mild illness in one person can be fatal in another”.

South Thanet Conservative MP Craig Mackinlay said he was sure that “common sense will remain with most of us” and people will stay away from work if they are ill in the same way as if they had a cold or flu.

“It’s now time to get the UK firing again on all cylinders,” he said.