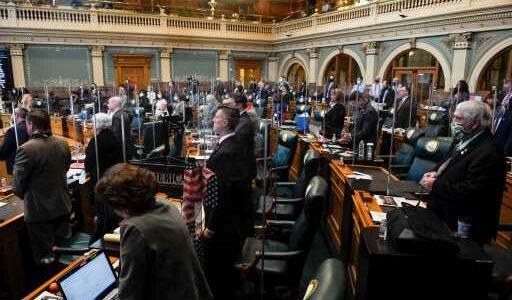 Colorado’s state legislature is facing a lawsuit over a modest effort to boost minority-owned small businesses during the coronavirus pandemic, and plans to largely undo its work this week.

Lawmakers approved $4 million for minority-owned small businesses as part of last month’s state stimulus package that exceeded $300 million. Lawmakers did so with recognition of both the racial wealth gap and the disproportionate economic impact of the pandemic on non-white people.

But soon after the program passed, a white man who owns a Colorado Springs barbershop sued Gov. Jared Polis and the Colorado Minority Business Office in federal court, alleging it is unconstitutional to exclude some business owners from the program because of race.

That lawsuit is still pending, and it has held up distribution of the $4 million — none of which has been allocated yet, a state spokeswoman told The Denver Post.

It’s one of the first things that Colorado’s legislature will address during its 2021 session, which started today. Evidently not willing to wait on a ruling, lawmakers will move immediately to pass a new bill that opens up the program to white people, too, though they will still have to qualify under various definitions of business hardship.

The bill is one of seven that the legislature plans to pass this week before taking a monthlong break, and it is perhaps the only in that group that can be considered controversial.

Lawmakers plan to adjourn Friday and begin their session in earnest next month, by which point many who work at the Capitol are expected to have received the COVID-19 vaccination.

The sponsors of the bill backtracking on the aid program’s eligibility wrote it so that the main point of the original version is being mostly undone. (There are two Democrats and two Republicans sponsoring the measure, one from each chamber.)

“Nobody put us up to this. It’s the sponsors that want to do this,” said Senate Majority Leader Steve Fenberg from Boulder, who is not a sponsor of the bill. “I don’t think it’s an acknowledgement that we are going to lose the court case. I think it’s about if it gets tied up more, it could potentially mean the money can’t go out the door, or it can go out the door and then get clawed back, or something like that.”

“When this came up, that we may need to make a change because of litigation, I think it was appalling,” said Coleman, who is Black. “The initial response from minority business owners was, ‘We’re only getting $4 million across the entire state, and now that’s being challenged?’”

Coleman said he’ll vote for the bill because some money out the door is better than none.

The new measure outlines a series of criteria by which business owners can qualify for the funding; minority-owned businesses automatically qualify. Preference will be given to businesses that meet multiple criteria, the bill states. Attorney Wen Fa, speaking on behalf of the Colorado Springs barber, told The Denver Post that the man isn’t satisfied by the new bill.

“The proposed legislation does not eliminate the constitutional problems presented by Colorado’s initial minority business set-asides. In particular, the proposed legislation still gives preferential treatment to minority-owned businesses,” Fa said. “Colorado may certainly provide COVID relief for small businesses in these challenging times, but the Equal Protection Clause of the Constitution prohibits the state from distributing funds based on race.”

Westminster Democratic Sen. Faith Winter is one of the lead bill sponsors, and she told The Post before presenting the measure in a committee Wednesday that she hopes it still helps many of the businesses the original version intended to.

“We want this $4 million to go to those small businesses that have been most disproportionately impacted by COVID, and minority ownership is a significant factor in that,” she said.

Republican Sen. Kevin Priola of Henderson, one of Winter’s co-sponsors, declined to comment. So did a spokesman for Attorney General Phil Weiser, whose office is defending Polis and the state against the lawsuit. Spokesman Lawrence Pacheco would not confirm or deny that the attorney general’s office had any hand in writing the revised bill.

Other notes from the first day of session

Colorado House Republicans resisted the foregone conclusion that the new speaker of the House would be Alec Garnett, a Denver Democrat, by nominating House Minority Leader Hugh McKean of Loveland.

The speaker is elected by a majority of House members, and Garnett — who was chosen in December by the Democratic members of the House — easily had the votes in the Democratic-controlled chamber. While the vote is traditionally ceremonial, a roll call vote was taken to cement Garnett’s new seat, 41-24. Members of both parties acknowledged the move was unprecedented, and Democratic Majority Leader Daneya Esgar of Pueblo said it was shameful for Republicans to end the bipartisan tradition.

Republicans — including Colorado Springs Rep. Dave Williams, who has been vocal about his opposition to McKean — said they supported McKean’s nomination as a means to give members a choice.