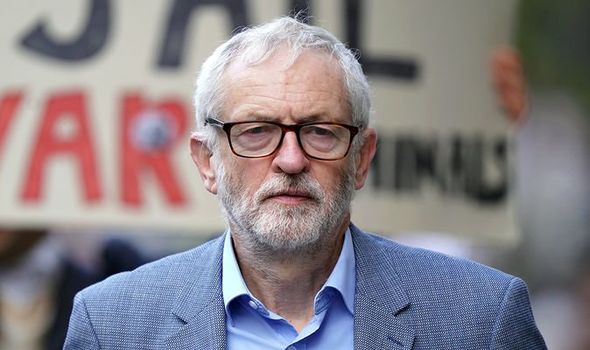 The Home Secretary is imposing a “full fat” proscription on any ties to the Palestinian militant Islamists.

Mr Corbyn has had close links with Hamas in the past, including holding meetings with officials from the group and once calling its members “friends”.

The former Labour leader’s aides insist he has never been a supporter of the organisation.

Asked about backing among the hard-left for Hamas, which has called for the destruction of Israel, Ms Patel said the new measures should “be a very strong message to any individual that thinks it is ok to be supportive of an organisation such as Hamas”.

Hamas’ military wing has been proscribed in the United Kingdom since 2001, but today’s announcement means its political wing will now also be proscribed.

It means anyone who “recklessly” supports it, arranges meetings to back it, invites people to endorse it or is a member will face up to 10 years in jail.

“But the current listing of Hamas creates an artificial distinction between various parts of the organisation – it is right that the listing is updated to reflect this.

“This is an important step, especially for the Jewish community. Hamas is fundamentally and rabidly antisemitic. Anti-Semitism is an enduring evil which I will never tolerate.

“Jewish people routinely feel unsafe – at school, in the streets, when they worship, in their homes, and online.

“This step will strengthen the case against anyone who waves a Hamas flag in the United Kingdom, an act that is bound to make Jewish people feel unsafe.

“Anyone who supports or invites support for a proscribed organisation is breaking the law. That now includes Hamas in whatever form it takes.

“If we tolerate extremism, it will erode the rock of security.”

A spokesman for Mr Corbyn said, “Jeremy Corbyn is a supporter of justice and human rights for the Palestinian people, peace and a two state solution.

“He has never been a supporter of Hamas but recognises the need to bring all sides together for dialogue to promote security, peace and justice for both peoples.”

“The proscription ends the dangerous loophole via which this terrorist organisation can spread its extremist poison here and raise funds and support in the UK. Hamas regularly espouses violent jihad and grotesque antisemitism.

“It is responsible for countless terror attacks including suicide bombings, the murder of Israeli citizens and others, the use of Palestinian civilians as human shields, repression of political opponents, women and LGBT people. We are immensely grateful that it will no longer have any safe harbour or support in the UK. We thank the Prime Minister, the Home Secretary, and the Government for this decisive action in tackling extremism.”

Lord Austin of Dudley, the UK’s Trade Envoy to Israel and a former Labour minister, said: “I am delighted the Home Secretary has banned the genocidal terrorists of Hamas who are opposed to any peace agreement, want to wipe Israel off the map, and murder the Jews who live there.

“They caused this year’s conflict by firing thousands of rockets at indiscriminately at Israeli civilians, but they also rule Gaza in exactly the same way Isil ran the land it controlled.

“Women are treated terribly, gay men are killed, and opponents are arrested and executed. Hamas and Isil are merely different faces of the same Islamist threat that hates the West, our allies in the Middle East and everything we stand for.”

Claudia Mendoza, Co-Chief Executive of the Jewish Leadership Council: “Hamas is committed to the destruction of Israel, the world’s only Jewish state. The myth that Hamas has separate military and political wings is finally laid to rest and we welcome this bold and important step by the Government.”