A GOP-led “audit” of the 2020 election results in Arizona’s largest county found no evidence of widespread fraud, voting irregularities or miscounted ballots, according to a draft report of its findings reported by KJZZ, a Phoenix public radio outlet.

GOP leaders are scheduled to release the findings of the review Friday afternoon, but the leak of the draft report has already rendered that announcement anticlimactic. The results are clear: Even an “audit” specifically commissioned and designed to bolster Trump and the GOP’s baseless claims of fraud and malfeasance couldn’t produce any evidence to support those assertions.

“Was there massive fraud or anything? It doesn’t look like it,” Randy Pullen, a spokesperson for the audit, told KJZZ.

The draft report states that “there were no substantial differences between the hand count of the ballots provided and the official canvass results for the county,” according to KJZZ.

The Arizona audit, to be clear, was never a legitimate review. Its findings, whatever they ended up being, were never going to offer definitive proof of anything that did or did not occur during last year’s election. But that it couldn’t produce something to back up Trump’s claims is an embarrassing result for Arizona Senate President Karen Fann (R), who commissioned the review ― and for the litany of Republicans who flocked to Arizona to study the process, which broke nearly every rule of legitimate election audits, according to nonpartisan election officials who observed it in person.

Polls have shown that half of Republican voters believe Trump’s lies that the Arizona “audit” would find sufficient evidence to help return him to office, an outcome that is constitutionally impossible. The audit was also the subject of intense interest on far-right online forums, where some users finally began to realize this week that the audit wouldn’t live up to their hopes.

Trump, meanwhile, seemed unaware as of Thursday night that the audit hadn’t found anything, judging by his excited statement about “what the highly respected auditors and Arizona State Senate found out regarding the so-called Election!”

The draft report suggests that the Cyber Ninjas audit will still seek to cast at least some doubt on the election. And Republicans in other states, including Pennsylvania and Wisconsin, are still pushing forward with plans to conduct similar reviews of their own 2020 election results. On Thursday, Texas election officials announced that new “forensic audits” — a term Republicans essentially invented to describe these reviews — would take place in four Texas counties. It’s all but certain that those, too, will fail to find any evidence of widespread fraud, which legitimate audits and hand recounts of elections across the country have shown did not occur in significant fashion during last year’s contests.

“If Trump and his supporters can’t prove it here with the process they designed, then they can’t prove it anywhere,” Benjamin Ginsberg, a longtime Republican election lawyer, said on a conference call with reporters Thursday. “And that should be a huge warning to the other state legislators who might think it’s a good idea to go down this path.” 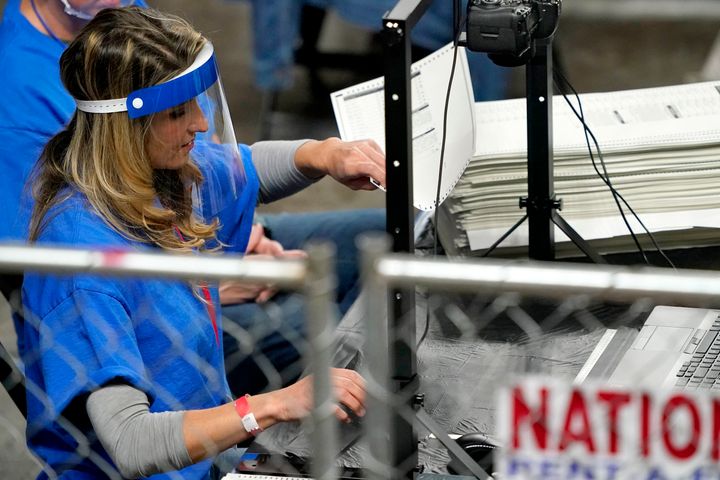 The Arizona “audit” has been plagued by problems from the outset. Republicans in the state Senate hired Cyber Ninjas, a firm with no election experience, to manage the undertaking. Cyber Ninjas CEO Doug Logan, and others involved in the undertaking, had spread many of Trump’s baseless conspiracy theories.

The review spent months chasing conspiracy theories — like the idea that some ballots had been printed on paper that included bamboo fibers, which supposedly meant they had been mailed from China and were part of a scheme to manipulate the results — and breaking basic procedures for how to handle, transport, store, count and mark ballots during an audit or recount process. Its practices, some which potentially violated federal election laws, compromised the integrity of Maricopa County’s voting machines, which will now have to be replaced.

Cyber Ninjas and the Arizona GOP also repeatedly missed their own deadlines for finishing the review and releasing its results, something they are finally expected to do Friday at 4 p.m. EST.

“Nobody has ever released what they believe to be good news at 4 p.m. on a Friday afternoon in the history of the United States or any other place on Earth,” David Becker, executive director of the Center for Elections Integrity and Research, told reporters Thursday. “So it’s clear how they view the credibility of the report.”

The Arizona “audit” was never likely to produce evidence of actual widespread fraud or malfeasance. Legitimate election audits and hand recounts of ballots had validated the official results and found no proof of widespread fraud, and there has been no significant fraud reported in Arizona, or anywhere else in the U.S., in any recent election.

But unearthing actual fraud was never the point of the review, which Trump called for ― and GOP leaders went forward with ― primarily to cast doubt on Biden’s legitimate victory in November’s election.

In that sense, the audit may have accomplished its goal. Dozens of Republican lawmakers at the state and national levels flocked to Phoenix to observe the audit, turning the need for similar sham reviews in other states into something close to conservative orthodoxy.

Despite (or perhaps because of) their failure to produce any evidence of fraud, leaders of the audit still claim to have unearthed proof of sloppy procedures and other problems in how Maricopa County conducted its elections, according to KJZZ. The draft report still perpetuates claims similar to some of Trump’s, saying that it found Maricopa County counted some ballots from voters who moved before the election and that there were computer-related issues with the county’s servers.

Pullen, the spokesperson for the auditors, told the station they could have produced even more such evidence, had Maricopa officials not blocked many of their requests for information.

The issues the report cites, though, are based on misunderstandings of actual election law and practices, one lawyer told The New York Times. And given the audit’s litany of problems and procedural mishaps, Cyber Ninjas’ claims and findings shouldn’t be treated as comparable to those an actual election audit might produce, Ginsberg, the Republican election lawyer, said Thursday.

“This was a designer audit,” Ginsberg said. “It bypassed all the commonly accepted standards of objectivity and reliability.”

The major risk of the Arizona audit, state Secretary of State Katie Hobbs told HuffPost in June, was that it would further delegitimize elections in the minds of many voters, especially those already prone to believe Trump’s claims of fraud. And the supposed issues that Cyber Ninjas says it uncovered may find an audience among hard-line Republican lawmakers and in a right-wing media ecosystem that continues to push Trump’s lies, as Trump and his allies cling to their conspiracies.

Friday morning, Trump insisted in a statement that the audit had “uncovered significant and undeniable evidence of FRAUD,” and called on Arizona’s attorney general to investigate it. Former Missouri Gov. Eric Greitens (R), who is running for U.S. Senate in 2022, said in his own statement that “Arizona must decertify” its election results, and dismissed as mere “spin” the reports that even Cyber Ninjas couldn’t find fraud.

Republicans and conservative media will also likely shift their attention to so-called “audits” in Pennsylvania, Wisconsin and Texas.

Those audits are in their nascent stages. Pennsylvania Republicans this month subpoenaed the personal information of voters across the state to determine “whether or not they exist” ― a request that could lead to the release of sensitive personal data, including driver’s license numbers, dates of birth and partial Social Security numbers.

The Texas secretary of state’s office announced Thursday that it would conduct “full forensic audits” of 2020 election results in Collin, Dallas, Harris and Tarrant counties. Texas’ 38 electoral votes ultimately went to Trump, but Biden won some of his largest margins in the state in Dallas and Harris counties. He narrowly won Tarrant County, and Collin County was the site of one of the state’s largest shifts away from Trump last year.

There are three ongoing audits in Wisconsin, only one of which is being conducted by the state’s nonpartisan Legislative Audit Bureau. Conservative lawmakers are seeking another “forensic audit” of the election, while state Assembly Speaker Robin Vos, a Republican whom Trump has attacked for supposedly not doing enough to overturn his loss there last year, also launched his own audit. Taxpayers will foot the $700,000 bill for that review, even though audits of elections across the state, and hand recounts of presidential results in two counties, turned up no evidence of fraud.

Ginsberg said it’s unlikely that the Arizona results will force Republicans in any of those states to have “a eureka moment” that causes them to cancel their audits. The best hope for now, he said, is that they will realize the damage Trump’s election conspiracies are doing to their own electoral prospects, and “ease [their] foot on the gas pedal.”

But there’s no reason to think that will happen immediately, or even before the next election. Arizona state Rep. Mark Finchem (R), one of the audit’s most enthusiastic supporters, is now running for Arizona secretary of state. GOP election skeptics in Georgia and other states are likewise looking to climb to higher levels of power.

The audit itself may be over, but the lies that drove it are still the principal animating feature of Republican politics. Cyber Ninjas’ predictable failure to surface even a shred of fraud likely won’t do much to change that.