The calls to action underscore the stark reality that the United States has no intention of rescuing government forces. 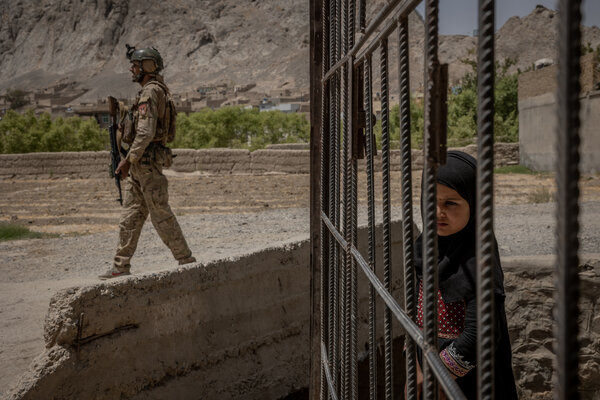 As the Afghan government has lost control of more than a dozen cities in a matter of days, Biden administration officials have repeatedly urged its collapsing security forces to demonstrate “leadership” and “will” to defend Kabul, their capital — underscoring the stark reality that the United States has no intention of rescuing them as the Taliban storm across the country.

Echoing several other top U.S. officials in recent days, John F. Kirby, a Defense Department spokesman, noted to reporters on Friday that Afghan government forces had numerical and firepower advantages over the Taliban and suggested they should be able to stop the onslaught if only they tried hard enough.

“We will do what we can from the air, but they have the advantage. They have greater numbers. They have an air force. They have modern weaponry,” he said. “It’s time now to use those advantages.”

A day earlier, Mr. Kirby was more explicit. “No potential outcome has to be inevitable, including the fall of Kabul,” he said. “It doesn’t have to be that way. It really depends on the kind of political and military leadership that the Afghans can muster to turn this around.”

President Biden has spoken in similar terms, saying on Tuesday that Afghan forces “have got to want to fight.” The next day, Jen Psaki, the White House press secretary, said the Afghans “have what they need,” but must determine whether they have “the political will to fight back.”

But Afghan forces are suffering from shattered morale, diminishing supplies, and the shock of a war they are losing much faster than all but the most pessimistic analysts expected.

And privately, many U.S. officials are growing increasingly doubtful that the Afghan forces can rally to mount a defense of Kabul, which could potentially force a stalemate and an eventual political settlement.