EXCLUSIVE – Americans for Prosperity (AFP), the powerful fiscally conservative and libertarian political advocacy group, is launching the next phase of its seven-figure effort to spotlight what it considers the “harmful provisions” in President Biden’s massive $1.9 trillion COVID relief package formally known as the America Rescue Plan.

The package, Biden’s initial top priority upon taking over in the White House and his first major legislative success to date in his brief presidency, was passed by the Democrats’ House and Senate majorities along party lines. Republicans criticize the package as a liberal wish list and a “blue state bailout” that is chock-full of unnecessary spending that’s not directly related to the pandemic.

AFP argues that the measure wasn’t targeted relief to those who need it most and lambasts the act as “a partisan wish list of unrelated spending that bails out insurance companies and fiscally irresponsible states, grows government control over health care, and mandates restrictions on states’ ability to reform their tax codes, among numerous other unrelated (and counterproductive) provisions.”

In opposing parts of the measure, AFP says it will ramp up its “unparalleled grassroots” effort to elevate the conversation over the merits of the law and to push its broader agenda “to advance good policy while working against the bad.” 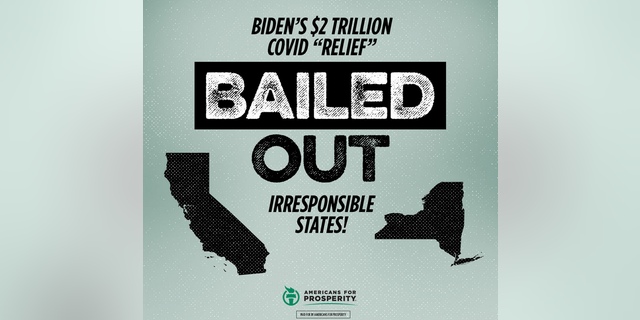 AFP says its campaign – shared first with Fox News – kicks off this week and includes digital display ads, video and connected TV advertising. Among the display ads is one that charges “Biden’s $2 trillion COVID ‘relief’ bailed out irresponsible states,” with the outlines of the Democratic controlled states of California and New York included in the ad.

As part of the blitz, AFP will “hold accountable” 26 members of Congress – who voted for the bill and some of whom likely face challenging reelections in 2022 – and thank 11 Republicans who voted against the legislation.

Those being thanked are Sens. Susan Collins of Maine, Tim Scott of South Carolina, Thom Tillis of North Carolina, Ron Johnson of Wisconsin, Pat Toomey of Pennsylvania, Mike Lee of Utah, Rick Scott of Florida, and Rob Portman of Ohio, as well as Reps. Nancy Mace of South Carolina, Ashley Hinson of Iowa, and Peter Meijer of Michigan. 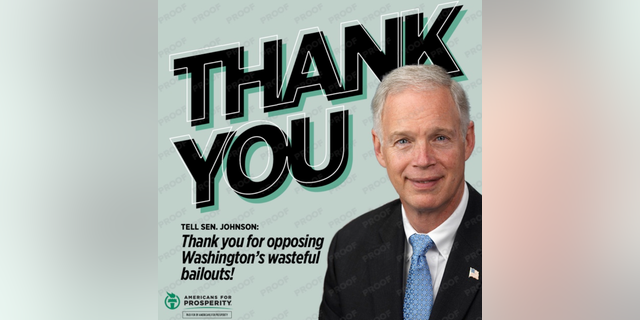 In a new campaign, Americans for Prosperity thanks 11 congressional lawmakers for voting against President Biden’s COVID relief package.

HOW MUCH MONEY EACH STATE RECEIVES FROM COVID RELIEF PACKAGE

Among the Democrats being held “accountable” for voting for the package are Sens. Jon Tester of Montana, Kyrsten Sinema and Mark Kelly of Arizona, Jon Ossoff and Raphael Warnock of Georgia, and Maggie Hassan of New Hampshire. The list also includes Reps. Abigail Spanberger of Virginia, Cindy Axne of Iowa, Elissa Slotkin of Michigan, Ron Kind of Wisconsin, Conor Lamb of Pennsylvania, Sharice Davids of Kansas, Tom O’Halleran of Arizona, and Lucy McBath and Carolyn Bourdeaux of Georgia.

This second phase of AFP’s campaign follows a six-figure blitz of digital and radio ads and direct mail in February in 10 states that took aim at the COVID relief bill as it made its way through Congress.